QB Sam Darnold excited to be where he's 'wanted' in Carolina 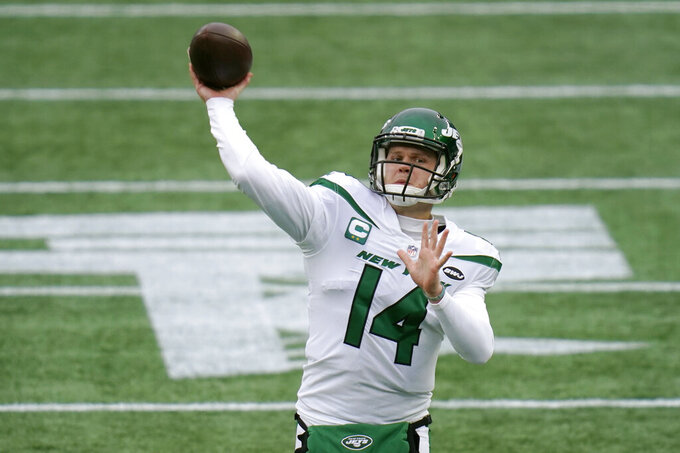 CHARLOTTE, N.C. (AP) — When Sam Darnold came to the Jets as the No. 3 overall pick in the 2018 draft his goal was to spend the next 20 years in New York and win a lot of Super Bowls.

That made being traded to the Carolina Panthers after just three non-playoff seasons all the more difficult to accept for the 23-year-old quarterback.

“Anytime you go somewhere and you set lofty goals and those goals aren’t met, that’s tough,” Darnold said Monday in his first interview since joining the Panthers. “When I heard the news that they wanted to trade me, it was tough. Anytime you are not wanted somewhere that is a tough pill to swallow.”

But Darnold said his feelings began to change when he met Panthers owner David Tepper and some of the team's coaching staff, and realizing that he'd have a chance to jumpstart a struggling career in which he went 13-25 as a starter in his first three seasons.

“You go from being unwanted and then all of a sudden the people in Carolina wanted me and traded for me,” Darnold said. “I was just so excited for a fresh start and new opportunities. So it was bittersweet. ... I'm very thrilled to get going."

Darnold is coming off a season in which he was 2-10 as a starter and endured his worst statistical season with just nine touchdowns and 11 interceptions.

With the Jets holding the No. 2 pick in the draft, the organization felt it was the right time to move on at quarterback and traded Darnold for a sixth-round pick this season and second- and fourth-round picks in 2022.

Panthers second-year coach Matt Rhule believes Darnold has the talent to take Carolina to the next level following a 5-11 season. The team is so confident in Darnold that they've already given last year's starting QB Teddy Bridgewater an opportunity to seek a trade with another team on his own.

“We brought Sam here because we think he can play at a really high level,” Rhule said.

And Rhule likes what he's seen on tape from his new QB.

“I don't think there is a game that you watch where he doesn't make a play where you say, ‘Oh there it is,’" Rhule said. "He can fit the ball into tight windows. He can create with his feet and he moves around a ton. He creates plays with his legs and extends plays with his legs and you can just kind of see and feel his grittiness and his toughness. I think his arm talent and his movement are a great fit for the players we have here that he will be playing with."

Darnold declined to knock the Jets on the way out the door, saying he has nothing but respect for the organization and thinks that general manager Joe Douglas and coach Robert Saleh will get the organization on the winning track soon.

He said not knowing about his future this offseason was “driving me insane," but said that prior to the trade he never wished to leave the Jets.

“I always thought that I could make it work in New York, just being honest. I really did,” Darnold said. “My goals never changed, even though there was speculation about me being traded. I always believe that we were going to get some pieces and win some games in New York and go the playoffs and win a Super Bowl.”

Darnold should have more playmakers to work with in Carolina.

Talented multidimensional running back Christian McCaffrey returns, as do 1,000-yard wide receivers D.J. Moore and Robby Anderson, the latter of which Darnold played with in New York.

“I think this will be a good fit for me," Darnold said, adding that his first order of business is to become familiar with offensive coordinator Joe Brady's offensive scheme.

Rhule said the addition of Darnold doesn't preclude the Panthers from taking a quarterback at No. 8 overall, although obviously that's no longer a pressing necessity.

With the starting quarterback position seemingly settled, Carolina has the option to take the best player available in the first round and then focus more on needs with the team's other six draft picks.