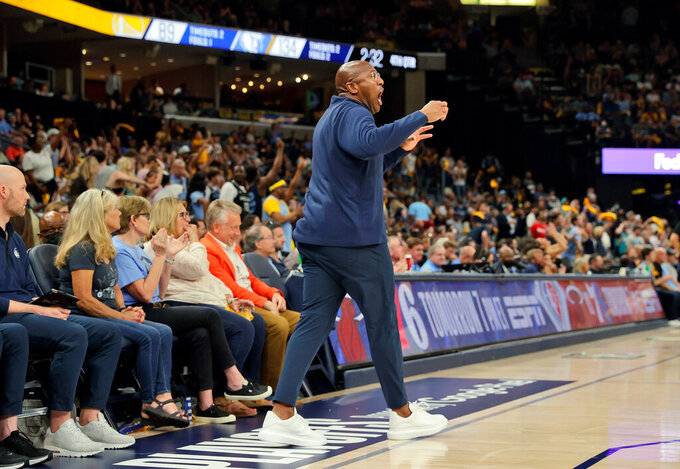 Mike Brown comes off the bench to call out instructions in the second half as the Golden State Warriors played the Memphis Grizzlies in Game 5 of the Western Conference Semifinals of the NBA Playoffs at Fedex Forum in Memphis, Tenn., on Wednesday, May 11, 2022. The Warriors lost to the Grizzlies 134-95. (Carlos Avila Gonzalez/San Francisco Chronicle via AP)

SAN FRANCISCO (AP) — It’s an annual occurrence in the NBA. Teams change head coaches and the roster of candidates who should get those jobs starts getting bandied about, and especially in recent years those lists almost always included Black candidates.

Case in point: Ime Udoka, who is of Nigerian descent.

For five years, he was one of those can’t-miss candidates but never got hired. That is, until the Boston Celtics gave him the opportunity. And all Udoka did in Year 1 was reach the NBA Finals.

“I don’t understand what took so long, to be honest,” Celtics guard Jaylen Brown said.

Udoka’s hiring by the Eastern Conference champion Celtics, who open the NBA Finals on Thursday night against the Golden State Warriors, was part of a transformative year for the league when it comes to diversity within the coaching ranks. In the last 12 months, eight coaching jobs have been filled by Black candidates — and for the first time, half the league’s franchises, 15 of the 30, have Black head coaches.

“It means a lot,” said Golden State assistant Mike Brown, one of the eight recent Black hires; he’s taking over the Sacramento Kings when this series ends. “When my son, and my oldest son’s about to have his first son, when they turn on the TV and they see people that look like them leading an NBA team on the sidelines, it can be inspiring.

“For me, carrying the torch and then passing it to the next generation is something that I think about often — not just for my family, but for others out there.”

Mosley interviewed for nine jobs before getting hired in Orlando. Ham, like Udoka, had been a can’t-miss name for years, but never got a chance until now.

“Darvin is about as good a guy as you’re going to see, a big competitor,” Boston’s Al Horford said. “Extreme competitor. The Lakers are really lucky to have a guy like him. He’s the kind of guy that you want.”

It’s been nearly 60 years since Bill Russell broke the NBA coaching color barrier when he became the first Black man to coach a team; he accepted the role as player-coach of the Celtics starting with the 1966-67 season and won a championship in his second season.

Al Attles and Lenny Wilkens were the next two Black coaches to get opportunities; they would eventually become champions as well. There have been roughly 260 different coaches in the NBA, excluding short-term interim fill-ins, since Russell was hired, and 1 out of 3 of those coaches have been Black. But most of those Black coaches have either lasted in their first job no more than three years or not gotten a second chance at leading a team.

Players wanted that to change. Evidently, so did other coaches.

“For many years qualified young coaches of color like Ime Udoka, Jamahl Mosley, Willie Green, Wes Unseld Jr., Darvin Ham and Stephen Silas, to name just a few, were not getting consistent opportunities to interview for NBA head coaching positions,” said Indiana coach Rick Carlisle, the president of the National Basketball Coaches Association. “The last two years changed everything. The league office has tirelessly made franchises more aware of the qualifications and journeys of these talented young coaches. This increased awareness has led to qualified coaches of all backgrounds having greater opportunity to interview and the numbers speak for themselves.”

Part of that awareness came from a meeting that three league officials — Commissioner Adam Silver, chief people and inclusion officer Oris Stuart and president of social responsibility and player programs Kathy Behrens — had with Carlisle, representing the NBCA, in February 2019.

Out of that meeting, the NBA Coaches Equality Initiative was born. The NBCA worked with the league in many ways to get it started, including the building of a database; in a couple of clicks, teams in need of coaches could get information, including qualifications, experience and even an on-camera interview in some cases, on every available candidate.

“You have to talk about these issues all the time," Silver said Thursday. “If you care about diversity and inclusion in your workplace ... it has to become a focus."

There are still areas where the NBA can improve in terms of diversity. Most front-office positions are not held by people of color and Michael Jordan is the lone Black principal owner of a franchise; Jordan leads the Charlotte Hornets, the only team that has a coaching vacancy right now.

It's an issue, and while there has been improvement in some areas, Silver wants more.

That said, the numbers in the NBA wildly exceed the other major U.S. pro leagues.

There are three Black coaches in the NFL: Pittsburgh’s Mike Tomlin, Houston’s Lovie Smith and Tampa Bay’s Todd Bowles. That does not include Miami’s Mike McDaniel; his father is Black, but McDaniel identifies as biracial. The person McDaniel replaced in Miami, former coach Brian Flores, is suing the Dolphins and the NFL for what he says is racial discrimination in hiring practices.

But he also points out that he longs for a day when 50% of the coaches in a league being Black won't seem like a milestone, saying that's “the dream." And Silver echoed those sentiments.

“I’m particularly proud of numbers and roughly 50% of our head coaches are Black now, the goal is that that's not newsworthy," Silver said. “And when people are hired, the first reaction isn't the color of their skin."

By Maryclaire Dale 2 hrs ago
By W.g. Ramirez 3 hrs ago
By Noah Trister 10 hrs ago
By Kyle Hightower 11 hrs ago
By Steve Reed 14 hrs ago