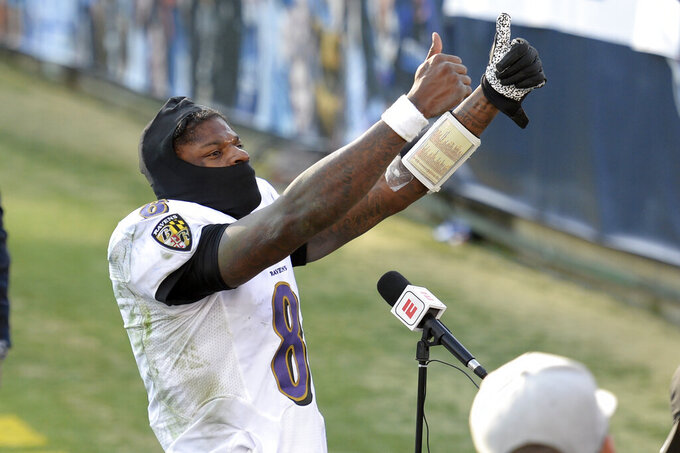 ORCHARD PARK, N.Y. (AP) — Bills defensive end Jerry Hughes feels as if he’s back at TCU, where the Horned Frogs would open training camp prepping for the read-option offense to squeeze in extra time for what had been their annual meeting against Air Force.

“Given all the misdirection, and the quarterback having the option to pull the ball and run, it feels a little like college," Hughes said Wednesday, referring to Buffalo preparing to host Lamar Jackson and the Baltimore Ravens in an AFC divisional playoff on Saturday. "I guess playing in the Mountain West for me has its upside.”

There are, of course, a few big differences he readily acknowledged by noting the Bills (14-3) have less than a week to prepare for the NFL's top-ranked running attack, and Jackson is unlike any quarterback Hughes has seen at any level.

“Just his quickness, his agility, I think he’s a a little bit more agile than your Kyler Murray, and probably a little bit more speedy as well,” Hughes said, comparing Jackson to Murray, the Arizona starter. “Whenever you’ve got somebody that dynamic, you need bodies, you need population just to keep him contained. He’s like a bolt of electricity. You don’t want to let that out.”

Jackson, the NFL’s MVP last season, has been on a tear since spending a week on the reserve-COVID-19 list in late November.

The fifth-seeded Ravens (12-5) have since won six straight, the last a 20-13 wild-card playoff victory at Tennessee last weekend. It's a stretch Jackson has combined for 988 yards passing and 11 touchdowns and 566 yards rushing and five TDs.

The Bills are on a seven-game roll after winning their first playoff game in 25 years following a 27-24 victory over Indianapolis on Saturday.

Keeping an immobile Colts quarterback Philip Rivers in check might be one thing. The concern is how Buffalo's defense has struggled against the run, and particularly when facing opponents with dual-threat quarterbacks this season.

The Bills gave up a season-worst 245 yards rushing in a 26-17 loss to Patrick Mahomes and the Kansas City Chiefs on Oct. 19, in a game rookie Clyde Edwards-Helaire finished with 161 yards rushing.

And Buffalo's winning streak followed a 32-30 loss at Arizona on Nov. 15 in which Murray had 61 yards rushing and two scores on top of 245 yards passing and a decisive 43-yard touchdown to DeAndre Hopkins in the final seconds.

“Yeah, thanks for the reminder, I appreciate that,” Bills coach Sean McDermott said sarcastically, when reminded of his defense's lapses. “Well, that’s one thing that we’re working on, so we’re going to go practice in a few hours here and work on that.”

If there’s a bright side, the Bills kept Jackson and the Ravens mostly in check in a 24-17 loss to Baltimore on Dec. 8, 2019. Jackson finished with a season-low 40 yards rushing on 11 carries, but burned Buffalo with three touchdowns passing.

The downside for Buffalo is a defense which isn’t as stout as it was last year following several offseason free-agent departures, and run-stuffing defensive tackle Star Lotulelei’s decision to opt out from playing due to COVID-19 concerns last summer. In finishing 17th in the NFL against the run, Buffalo has given up 150 yards rushing five times this season as opposed to four in 2018 and ’19 combined.

Defensive coordinator Leslie Frazier acknowledged he had to shift expectations this offseason, and adapt to the strengths of his roster which features more speed than bulk.

“You have to come to grips with that early on,” Frazier said. “You have to adjust. Don’t be pig-headed and say we’re just going to keep doing X, Y and Z because it was good for us with the group a year ago or two years ago.”

The Bills have shown improvement over the final 10 games of the season in adopting an aggressive identity, based on pressuring quarterbacks and forcing takeaways.

The test now becomes whether Buffalo can find ways to rattle Jackson.

“It’s a different offense and we’ve got to be able to show that we can stop their main run plays and try to force this team to try to throw the football,” safety Jordan Poyer said. “Until we’re able to stop their running attack, they’ll be running the ball all game long.”

Buffalo’s strength is a secondary featuring the well-established trio of Poyer, safety Micah Hyde and second-team All-Pro cornerback Tre’Davious White. The trouble is, they could be rendered moot if the Ravens don’t have to lean on the NFL’s 32nd-ranked passing attack.

As Poyer noted, Jackson won't need to throw if the Ravens are succeeding on the ground.

Hughes is confident in the defensive game plan and not worried about past defensive struggles.

“We took every game as a way for us to learn, grow and to get better,” he said.

“We’re excited for the matchup just because we’ve seen some very dynamic dual-threat quarterbacks. We know what we’re going to get from Lamar,” Hughes added. “It’s very scary, but it also makes for a lot of fun.”