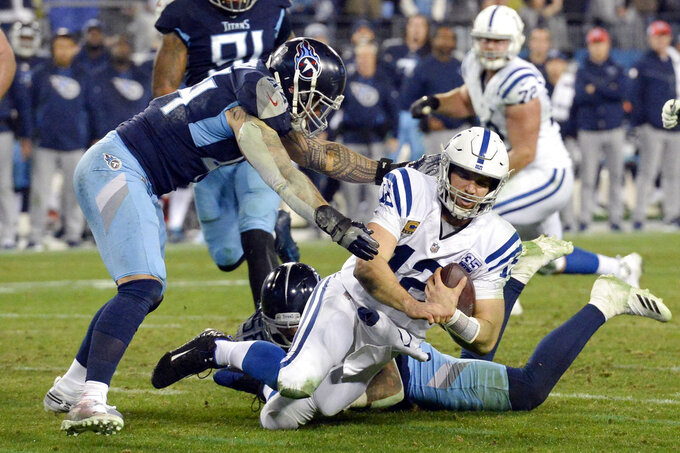 Indianapolis Colts quarterback Andrew Luck (12) is brought down as he scrambles against the Tennessee Titans in the second half of an NFL football game Sunday, Dec. 30, 2018, in Nashville, Tenn. (AP Photo/Mark Zaleski)

This weekend he's officially back.

After a coaching change, a major roster overhaul and nearly two years removed from shoulder surgery, the Indianapolis Colts quarterback celebrated New Year's Day by prepping for Saturday's wild-card game in his hometown of Houston.

"I'm having fun and that's the most important thing," Luck said Tuesday. "The fact that we get to play another game in the playoffs, that's stinking awesome and I think a small part of us understands how special it's been so far. I've said this before, it's been fulfilling. But satisfied? No, not at all."

At least not until he wins a championship.

Until then, proving the doubters wrong must suffice.

While some questioned whether Luck would ever be the same after missing the entire 2017 season to rehab from a partially torn labrum in his throwing shoulder, many believed the injury would prevent him from ever fulfilling the championship expectations applied to the top overall pick in the 2012 draft and Peyton Manning's hand-picked replacement.

Now, after a three-year playoff drought, a healthier Luck seems to have the Colts back on track.

He produced single-season career highs in almost every significant passing category this season and finished second in the NFL with 39 touchdown passes — one short of his total from 2014 when the Colts previously made the playoffs.

He helped the Colts (10-6) rebound from an abysmal start by leading them to nine wins in their final 10 games. Indy became only the third team in league history to reach the postseason after going 1-5.

And for the second time, Luck made the prognosticators look silly by taking a team that was lightly regarded by some to the playoffs. Those who were around for Luck's first act, in 2012, haven't forgotten how it felt then or how familiar it all seems now as he prepares for his fourth playoff appearance.

"He's doing a great job," receiver T.Y. Hilton said. "He's having fun and after all the work he's put into it, he's looking good."

What Luck has done best this season is adapt to a continually evolving environment.

First-year coach Frank Reich wanted Luck to get the ball out of his hands quicker and exploit the mismatches created by his cadre of tight ends. He's done both.

Luck quickly acclimated to the rotating receivers, throwing TD passes to 13 different players. It could come in handy against the AFC South champion Texans (11-5), too.

Hilton injured his ankle Dec. 8 and has spent more time getting treatment than practicing over the past three weeks. But he has yet to miss a game, continues to make big plays and is eager to return to Houston where he already has four 100-yard games, including nine catches for 199 yards in the Colts' previous visit.

"That's probably why it's starting to feel better," Hilton joked before sitting out Tuesday's walkthrough.

He's not the only receiver battling injuries. Ryan Grant (ankle) and Zach Pascal (knee) both sat out Tuesday while Daurice Fountain (ankle) and Dontrelle Inman (shoulder/finger) — did limited work.

All of it could make Luck's job more complicated Saturday.

But with a more balanced attack, a rapidly improving defense and a chance to jump back on the postseason stage for the first time since "Deflategate", Luck embraces the opportunity to let everyone else see what he and his teammates can do.

"It feels like we've been playing in the postseason for quite a while now and I don't think anybody's approach will change in this locker room," Luck said.

"If you've played five, six, seven years in this league, you've overcome something. So there are a lot of folks who have overcome a lot. I was talking to my folks about this and it's hard when you're in the weeds to sort of flip the switch and zoom out and get a little different perspective and appreciate or understand what happens because if you're in it, it's like you're on and you don't want to get out of it."

Notes: Indy signed defensive end Geneo Grissom and waived cornerback Jalen Collins on Tuesday. The 6-foot-4, 265-pound Grissom played in 37 games over the past four seasons with New England. He has seven tackles in his career and was a third-round draft pick in 2015.