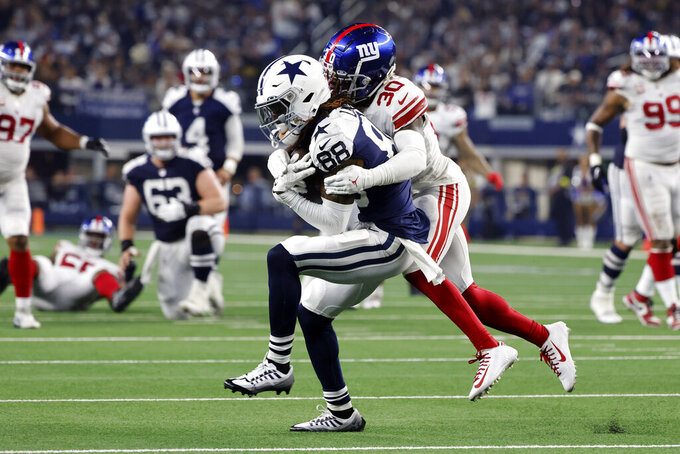 TURNOVER DIFFERENTIAL: Commanders even; Giants plus-3.

COMMANDERS PLAYER TO WATCH: Safety Darrick Forrest will be tasked with keeping an eye on Daniel Jones and Saquon Barkley, an important job considering linebacker Cole Holcomb remains out and secondary depth is being tested. Forrest often plays in three-safety looks in place of an extra linebacker and is a big hitter who can break up passes and force turnovers.

GIANTS PLAYER TO WATCH: Rookie outside linebacker and edge rusher Kayvon Thibodeaux only had one assisted tackle against the Cowboys on Thanksgiving. What opened a lot of eyes were the five quarterback hits on Dak Prescott by the No. 5 overall pick in the draft. The sacks might start coming this weekend.

KEY MATCHUP: The Giants offensive line against the Commanders defensive line, which would feature four first-round draft picks if edge rusher Chase Young plays. When New York has won this season, Saquon Barkley runs the ball and Daniel Jones selectively throws it. It hasn't happened the past two weeks. Rookie RT Evan Neal (knee) is expected to play after missing a month.

SERIES NOTES: The Commanders have won the past two. ... The previous time the teams were in a playoff race was in the 2020 pandemic season. Washington (7-9) won the NFC East, beating Philadelphia in the final game of the regular season to edge the Giants (6-10). ... The Commanders' 6-1 record in the past seven games is the best record in the NFL over that span. They're 5-1 and 3-0 on the road since Taylor Heinicke replaced Carson Wentz as starting QB.

STATS AND STUFF: Washington leads the NFL in time of possession, averaging 32:46 a game to New York's 31:09, which ranks seventh. ... Heinicke has thrown for seven touchdowns and five interceptions in six starts. ... Rookie RB Brian Robinson Jr. ran for a career-high 105 yards against Atlanta. It was his first 100-yard game. ... Washington rushed 37 times for 176 yards using five different ball carriers against the Falcons. ... RB Antonio Gibson has 50-plus scrimmage yards in four consecutive games against the Giants. ... DE Montez Sweat leads Washington with seven sacks. DTs Jonathan Allen and Daron Payne each have 6½. They are the only trio of teammates each with 10 tackles for loss this season. ... CB Kendall Fuller has interceptions in each of the past two games. ... Barkley needs 8 yards rushing for his first 1,000-yard season since 2019. He has rushed for a team-high seven TDs. ... Jones has set a single-season, team record for a quarterback in the Super Bowl Era, running for 451 yards this season. ... Giants WR Darius Slayton is going for his third straight game against Washington with a TD catch. ... S Julian Love had 10 tackles and his fifth career interception last week. ... LB Jaylon Smith had a season-high 10 tackles against the Cowboys. ... DT Dexter Lawrence has a career-high five sacks this season. ... DL Leonard Williams has a sack in three of his past four against Washington. ... CB Rodarius Williams had his first career interception last week. ... The defense is tied for the league lead with 10 fumble recoveries.

FANTASY TIP: Terry McLaurin: The Washington wide receiver leads the team with 54 catches and 840 yards receiving and two TDs. In two games last season against New York, he had 15 catches for 200 yards and a touchdown. Giants top cornerback Adoree Jackson (knee) missed the Dallas game and things are not encouraging for a return this week.