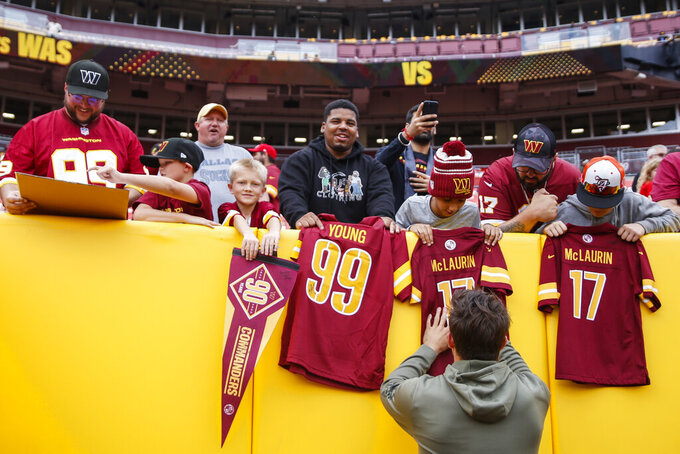 WASHINGTON (AP) — The attorney general for the District of Columbia said he is holding a news conference about the Washington Commanders on Thursday, the latest off-field development for the NFL franchise that is the subject of multiple ongoing investigations.

The office of D.C. Attorney General Karl A. Racine announced Wednesday he will make a major announcement related to the team. No details were provided.

Racine's office launched an investigation into the team around the time the U.S. House Committee for Oversight and Reform referred its case, which initially centered on workplace culture issues, to the Federal Trade Commission for potential financial improprieties.

The Commanders said in a statement issued by a team spokesperson that they learned about the news conference on social media.

“The Commanders have fully cooperated with the AG’s investigation for nearly a year,” the spokesperson said. “As recently as Monday, a lawyer for the team met with the AG who did not suggest at that time that he intended to take any action and, in fact, revealed fundamental misunderstandings of the underlying facts.”

Also in the statement, the team attempted to pivot the issue to violent crime in Washington, citing the August shooting of rookie running back Brian Robinson Jr.

Robinson's agent, Ryan Williams, criticized the team on Twitter, posting: “Up until an hour ago, the Commanders handled the Brian Robinson situation with so much care, sincerity and class. And I was so grateful for all of it. Although I know that there are some great humans in that building, whoever is hiding behind this statement is not one of them.”

The team is being investigated on several fronts, including by the attorneys general of D.C. and Virginia, Congress and the league. NFL spokesman Brian McCarthy last week said former U.S. Attorney Mary Jo White's review on behalf of the league is ongoing and there is no timetable for when it will be completed.

Owners Dan and Tanya Snyder announced last week they hired Bank of America Securities to look into selling part or all of the team. A team spokesperson said the Snyders were “exploring all options” in regards to the organization that Forbes values at $5.6 billion.

Washington, which rebranded as the Commanders in February, has been mired in issues unrelated to football since the summer of 2020, when multiple former employees said they were sexually harassed while working for the team. The team retained D.C. lawyer Beth Wilkinson's firm to launch an independent investigation into those allegations, which the league then took oversight of.

Commissioner Roger Goodell testified before the committee at a public hearing in June, and Snyder gave a deposition for more than 10 hours in July. Information about Snyder's testimony has yet to be released.

The committee in April sent a letter to the FTC saying the team engaged in potentially unlawful financial conduct and that there was evidence of deceptive business practice over the span of more than a decade, including withholding ticket revenue from visiting teams and refundable deposits from fans.

The Commanders denied withholding ticket revenue from other teams, and a law firm representing them sent a letter to the FTC with testimony, emails and other documents laying out evidence to dispute the accusations.

A week later, the Virginia attorney general’s office told the team it was opening an investigation into potential financial improprieties. Virginia Attorney General Jason S. Miyares said it was his responsibility to look into the matter, adding he had not “prejudged” the team's conduct.