Lions take Swift in 2nd round, Okwara and Jackson in the 3rd 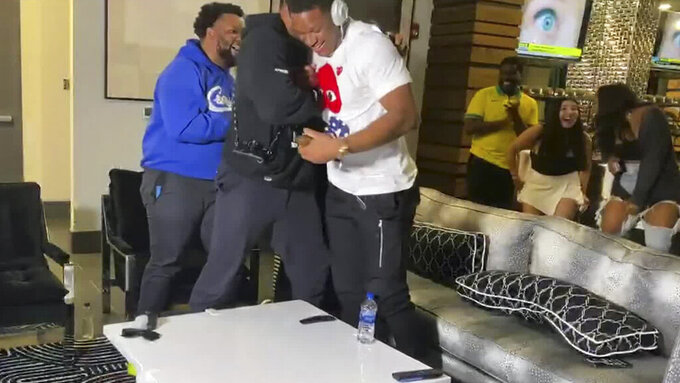 In this still image from video provided by the NFL, Julian Okwara, center wearing headphones, reacts to being selected by the Detroit Lions during the third round of the NFL football draft, Friday, April 24, 2020. (NFL via AP)

D’Andre Swift's favorite all-time running back is Barry Sanders, even though he was born after the Hall of Famer ended his career with the Detroit Lions.

Swift heard so much about Sanders that he watched the way he ran and tried to emulate him.

The Lions, clearly, loved what they saw Swift do at Georgia.

Detroit took Swift early in the second round of the NFL draft on Friday night with a slightly surprising pick.

The Lions had a pair of selections in the third round, including No. 85 overall as part of the trade that sent Pro Bowl cornerback Darius Slay to Philadelphia. They used that third-round pick from the Eagles in a deal with Indianapolis to move up to No. 75 to select Ohio State guard Jonah Jackson.

Lions general manager Bob Quinn disputed a report that Detroit backed out of a trade to acquire the No. 90 pick from the Houston Texans, whose coach, Bill O’Brien, was shown on TV visibly upset.

“I’m not sure what that was about, but we didn’t have a trade," Quinn said.

Detroit took Notre Dame linebacker Julian Okwara earlier in the third round. His brother, Romeo, is a defensive end for the Lions.

“It’s definitely a dream," Julian Okwara said. “I’m pretty much speechless. I’m kind of just still letting it marinate and thinking about it."

He does not, however, need much time to ponder where to live in the Motor City.

In his ninth game for the Fighting Irish last season, the 6-foot-4, 252-pound Okwara broke his left leg and his college career was over.

“I’m good to go and ready for the season," he said.

Okwara had 15 1/2 career sacks and 24 tackles for losses over his last three years at Notre Dame.

With its first pick of the night, Detroit decided Swift was too good to pass up at No. 35.

The 5-foot-8, 212-pound Swift was projected to possibly be a first-round pick.

He is known for being a big-play running back who has good vision and makes quick cuts. Swift entered the draft after running for 1,218 yards and seven touchdowns as a junior.

Despite sharing time in a talented backfield with the Bulldogs, he had 2,885 yards rushing and 20 touchdowns. The three-down running back also had 73 career catches for 666 yards and five scores.

The pick suggests the Lions may not be confident oft-injured running back Kerryon Johnson can stay healthy.

The Lions addressed a need with what appeared to be a perfect fit Thursday night, selecting Ohio State cornerback Jeff Okudah with the No. 3 pick overall.

Swift and Johnson potentially give the offense a potent backfield to help take pressure off quarterback Matthew Stafford. The passing game features a receiving corps that is perhaps the strength of the team on either side of the ball.

Jackson will have an opportunity to start in the spot vacated by Graham Glasgow, who left in free agency to sign with Denver. Okwara, meanwhile, helps the linebacking corps become perhaps the best part of the defense.

The Lions had an extended opportunity to evaluate Jackson while he practiced and played for their coaching staff at the Senior Bowl. When Jackson was still on the board in the third round, Detroit moved up 10 spots to get him. The Lions also picked up a sixth-round selection in exchange for the No. 85 pick and fifth- and sixth-round picks.

Jackson transferred from Rutgers to play with the Buckeyes, including Okudah, in 2019.

“I went to Ohio State just looking for opportunity, just to be able to showcase my ability and pounce on another platform," Jackson said.

The Lions go into Saturday with a pick in the fourth, fifth, sixth and seventh rounds. They will likely look to add depth on both lines and perhaps a wide receiver.