Packers proving they can win by relying on their defense 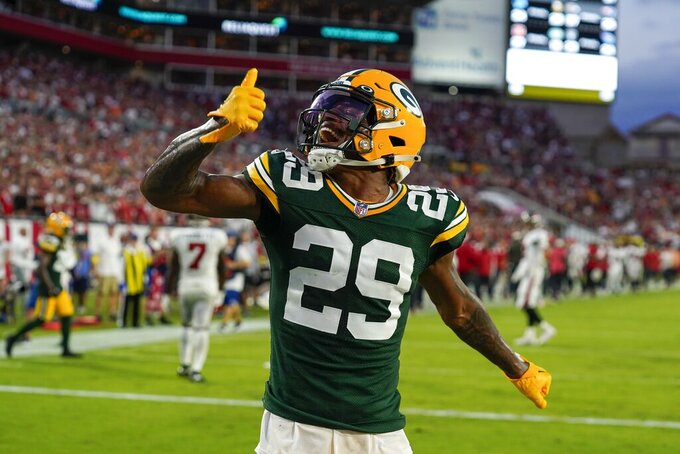 A team that has relied on Hall of Fame-caliber quarterback production for the past three decades is winning primarily because of the defense.

It hasn’t mattered because Green Bay’s defense has been so good.

“We already knew in the beginning of the year we were going to have to win games different ways,” defensive tackle Kenny Clark said.

“We understand that. We understand the talent we have on defense. Our mindset as a defense is being the best group out there each and every game. Whatever it takes to help us win the game, that’s what we’ve got to do.”

That’s pretty much what they’ve done after a bumpy start.

They’re allowing opponents to convert just 22.6% of their third down opportunities, the best such rate for any defense in the league.

The Packers are encouraged by those early results, but realize they have plenty of work ahead.

“It’s only been three games,” safety Adrian Amos said. “I take everything in the first three weeks with a grain of salt. We’re on to next week.”

That means preparing for the New England Patriots (1-2) and their uncertain quarterback situation.

Mac Jones injured his left leg in the Patriots’ 37-26 loss to the Baltimore Ravens, meaning the Packers don’t know whether they’ll be facing him or backup Brian Hoyer.

Green Bay has its own injury issues in the secondary after star cornerback Jaire Alexander missed most of a 14-12 victory at Tampa Bay with a groin issue. Alexander was a limited practice participant Wednesday.

But the fact the Packers limited a Tom Brady-led offense to a dozen points without having their best cornerback shows what this defense is capable of accomplishing.

“Everybody is a starter in this defense,” cornerback Rasul Douglas said. “Like literally, you can go to every guy, he’s a starter. That’s what we know. We all have one standard. It doesn’t matter who’s out there in the game.”

Sure enough, a team generally known for its big names on offense is featuring plenty of star power on the other side of the ball.

Rashan Gary is the first Packer since Cullen Jenkins in 2010 to have at least one sack in each of the first three games of a season.

Clark, a two-time Pro Bowl selection, had two sacks at Tampa Bay. De’Vondre Campbell, an All-Pro linebacker last season, had 14 tackles and got his hand on Brady's pass to foil a potential tying 2-point conversion attempt with 14 seconds left in that game.

Yet the Packers still believe they have plenty of room for improvement.

Green Bay’s offense figures to improve over the course of the season as the Packers’ rookie receivers mature and tackles David Bakhtiari and Elgton Jenkins return from torn anterior cruciate ligaments.

Until then, the defense will continue to pick up the slack as the Packers chase a fourth straight NFC North title.

“I don’t think we’ve really put a cap to what our defense can do,” Amos said. “We’ve just got to build it week by week.”