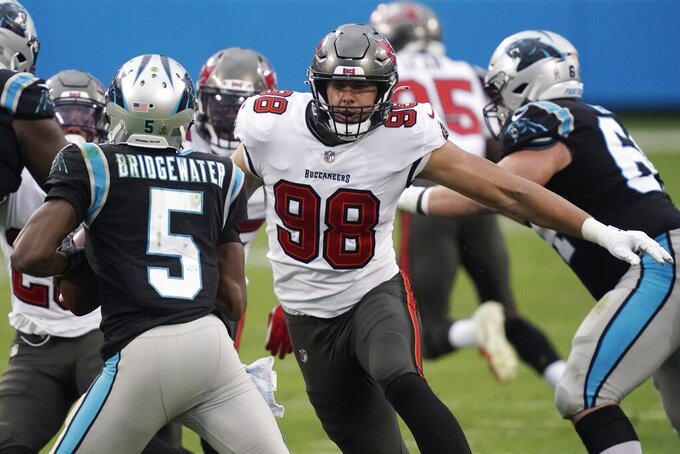 Following the team's fifth straight loss, an embarrassing 46-23 setback against the Tampa Bay Buccaneers, Panthers linebacker and team captain Shaq Thompson cussed out his teammates in the locker room.

A short while later, first-year coach Matt Rhule said on a Zoom call he was “unbelievably disappointed” in his team’s second-half performance, while calling Sunday's home loss “completely unacceptable from every member of that locker room — player (or) coach.”

The problem with Carolina (3-7) is the same issues keep occurring — a lack of production on offense in the third quarter, and getting off the field on third down on defense.

That has sent the season into a tailspin.

“We better find a way to do something better in the third quarter,” Rhule said. “It’s been consistent and one of the few things we haven’t improved. The third-down defense — and really, today, third-down offense — and third-quarter offense, those are the two things. We need to figure something out.”

The Panthers and Buccaneers were tied at 17 at halftime.

But the second half was all Tampa Bay.

The Buccaneers outgained the Panthers 322-35 after intermission and outscored them 29-6. Tom Brady helped the Bucs control the clock by converting 10 of 16 third-down opportunities, and the Bucs scored on nine straight possessions following a first-quarter fumble by Ronald Jones.

The Panthers entered the game last in the NFL in third-down defense, and they repeatedly allowed Brady and Jones to keep drives alive. Brady accounted for four TDs, and Jones rushed for 192 yards, including a backbreaking 98-yard touchdown on a play Thompson repeatedly called out to his defensive teammates in the huddle and again before the snap.

But Carolina players still wound up out of position and a big hole opened for Jones.

That left Thompson fed up in the locker room.

“I don't want to curse every other word, but he basically told everybody to look in the mirror,” Panthers cornerback Rasul Douglas said. “Like the coaches have been preaching all week — details, leverage, assignment and winning your one-on-ones. None of us did any of that. The whole team, we all did bad. He basically cursed everybody out and said we didn’t fight hard enough, we didn’t want it more.”

Thompson didn't speak to reporters after the game, but his frustration might stem from having seen this scenario play out before.

In 2018, the Panthers were 6-2 before a seven-game losing streak cost them a spot in the postseason. Last year the Panthers lost eight straight to close the season with a 5-11 record. Now the Panthers have lost five in a row after a 3-2 start.

“He just wanted to let us know that everyone has to buy in,” safety Tre Boston said of Thompson’s remarks. “Right now, we’re at a part of the season where — this organization has been through seasons where we’ve lost six, seven, eight games in a row. Where do we want to go with this? Where do we want to go as a team?”

The Panthers are back home to face the Lions next week.

Christian McCaffrey is expected to return, but it's unclear if the Panthers will have Teddy Bridgewater under center. The veteran QB left in the fourth quarter with a knee injury and did not return, although the game was getting out of hand at that point.

Rhule offered no updated on Bridgewater's status after the game.

“No one feels sorry for us,” Rhule said plainly.

Bridgewater started the game by completing his first 13 passes, including two for touchdowns. But Carolina finished 1 of 9 on third-down conversions and managed just 35 yards in the second half.

“We’ve played them twice now and they sacked and pressured and hit us," Rhule said. “That’s been the issue. That’s really been the issue for us this year offensively. When we have time, there are some guys open, but you have to have time. We just didn’t have enough time up front.”