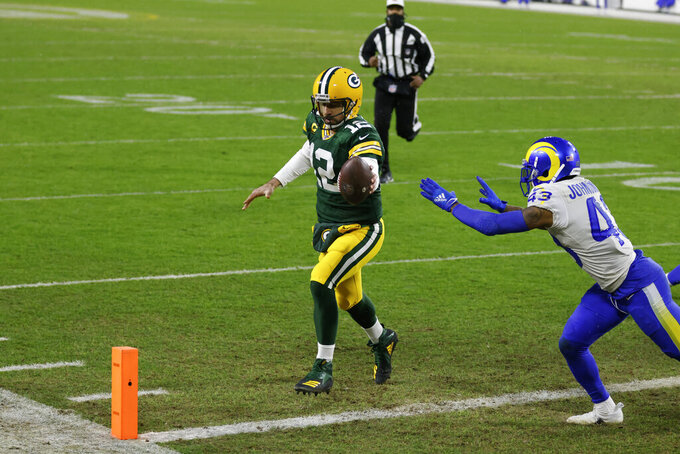 He's been waiting too long for this moment to have any such negative thoughts.

Rodgers threw two touchdown passes and also ran for a score as the top-seeded Green Bay Packers beat the Los Angeles Rams 32-18 in an NFC divisional playoff game Saturday. He will play a conference championship game at home for the first time since taking over as Green Bay's starting quarterback in 2008.

“I'm definitely a little emotional, just thinking about what we've been through,” said Rodgers, who went 23 of 36 for 296 yards. “It got me emotional with the crowd out there today.”

Rodgers threw a 1-yard touchdown pass to Davante Adam s and a game-clinching 58-yarder to Allen Lazard with 6:52 left. Rodgers also had a 1-yard touchdown run, the first by a Packers quarterback in a playoff game at Lambeau Field since Bart Starr’s winning sneak in the Ice Bowl against Dallas on Dec. 31, 1967.

The Packers (14-3) reached the NFC championship game for the fourth time in seven seasons as they chase their first Super Bowl berth in a decade. It will be their first NFC title contest at Lambeau Field since hosting for the 2007 season, when they fell to the New York Giants 23-20 in overtime. Rodgers was on Green Bay's roster during that 2007 season backing up Brett Favre.

Green Bay won the Super Bowl for the 2010 season as the NFC’s No. 6 seed, and has lost at Seattle, Atlanta and San Francisco in its last three conference championship game appearances.

Saturday’s game showed what a home-field edge can mean. The Packers played in front of 8,456 fans – a crowd that included paying spectators for the first time all season – but that small crowd made plenty of noise as the Packers built an early lead amid snow flurries.

That crowd chanted “M! V! P!” during the closing minutes to salute Rodgers.

“It's hard to really put into words how special that feeling is, but you can feel it,” Rodgers said. “It's so palpable. You can feel the energy in the stadium. It's just different. It's different playing in front of a crowd. It's a little more special and obviously more sweet.”

Jones ran for 99 yards and a touchdown on just 14 carries, including a 60-yard burst to open the second half. Rodgers called the Packers' offensive linemen “the stars of the game tonight.”

“Definitely not happy,” Rams defensive tackle Michael Brockers said. “A lot of the guys feel like it’s on them. ‘I messed up, or I failed you.’ Everybody had their hand in it. We just weren’t clicking on all cylinders.”

The Packers scored on each of their first five series and led 25-10 early in the third quarter.

After the Rams (11-7) finally forced a punt midway through the third quarter, they capitalized with Akers’ 7-yard touchdown run on a direct snap. They cut it to 25-18 with a nifty 2-point conversion: Van Jefferson caught a pass from Goff and lateraled to Akers, who strolled into the left corner of the end zone.

The Rams forced another punt and got the ball at their 6, but Kenny Clark's sack stalled the drive.

“I really thought that was going to be our chance to get back and potentially go drive and score and tie the football game up, and you never know what happens from there,” Rams coach Sean McVay said.

Green Bay’s A.J. Dillon fumbled on the ensuing series, but Rodgers recovered at the Packers 31 and advanced 3 yards. Three plays later, Rodgers hit Lazard, who caught the ball around the Rams 25 and raced into the end zone.

“We were definitely feeling a little bit of pressure," Lazard admitted. ”I think it’s more so just our expectation is to go out and score every single drive because we know that the only people that are stopping us is us.″

DT Aaron Donald played one week after a rib injury knocked him out of a 30-20 playoff victory at Seattle, but the unanimous All-Pro selection clearly wasn't himself and had just one assist.

“This guy is the epitome of a warrior,” McVay said. "I love him. The plan going in was seeing how he feels.”

Cameras showed Donald in tears on the Rams’ sideline after the Packers wrapped up the game.

For Green Bay, Dillon injured his quadriceps when he fumbled.

The Rams' season is over.

The Packers host either the New Orleans Saints or Tampa Bay Buccaneers on Jan. 24.