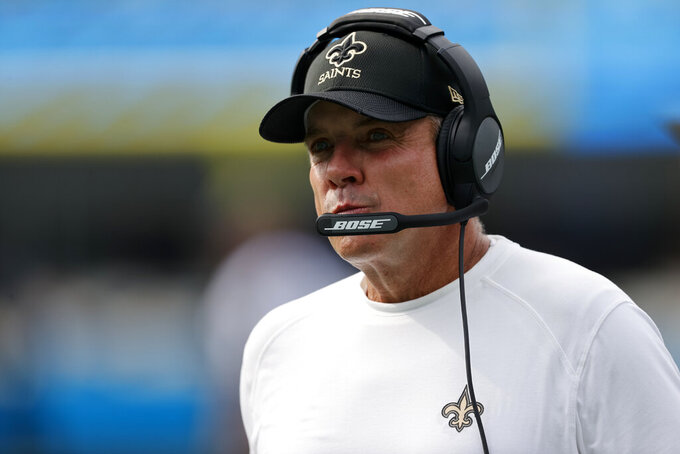 Sean Payton isn’t interested in discussing the challenges of being displaced, or missing injured starters, or having his available game-day coaching staff decimated by COVID-19 protocols.

New Orleans’ coach says the Saints were simply out-schemed at the line of scrimmage by Carolina, didn’t adjust well and were outplayed — and that is why they came crashing back to earth in Week 2.

“There were too many times a free (pass) rusher; too many times when our communication wasn’t on point,” Payton said Monday after reviewing video of Sunday's 26-7 loss at Carolina.

And Payton said the offensive linemen weren't the only ones unprepared to handle the way the Panthers disguised and applied pressure.

“It’s the group in its entirety. It’s our offensive line, our quarterback," Payton said. "It’s also (coaches) relative to a game plan of having good answers.

Payton and several Saints players also have been quick to credit Carolina's plan and execution.

“I don’t think it was a bad effort" by the Saints offense, left tackle Terron Armstead said.

Rather, he said, the Panthers were effective in disguising their intentions on defense with variation in the way they lined up and used personnel.

“They got a lot of guys doing multiple things," Armstead continued. “So, it becomes more difficult to diagnose.”

But he added, "We got a ton of things we need to clean up if we want to be as good as we feel like we can be.”

In the span of eight days, the Saints demonstrated both how good and how bad they can be, dominating Green Bay 38-3 in Week 1 before playing nearly all of their Week 2 game from behind.

The Saints displacement to the Dallas area since Hurricane Ida struck on Aug. 29, and having to relocate a home game to Jacksonville, Florida, didn't seem to hurt them in Week 1. But then they also lost eight coaches who had positive COVID-19 tests last week — six on offense and two on defense.

Payton said there were no updates on Monday regarding which coaches would be cleared to return to work at practice or during games — be it on the field or the booth.

Because they all have been vaccinated, they may return as soon as they've had two negative tests 24 hours apart.

In the meantime, the Saints are taking a hard look at what went wrong on Sunday rather than simply writing it off as a bad day.

“I wouldn’t say we need to just flush it because we need to grow from this,” defensive lineman Malcolm Roach said. "We need to study this film and realize what we’re doing wrong and find out where we’re making our mistakes so we can learn from them. We can’t let one loss beat us twice.”

The Saints still played decent defense overall — despite several injuries to starters — and kept New Orleans in the game at Carolina until the final six minutes. The Saints sacked Carolina's Sam Darnold a couple of times and forced him into a turnover that led to New Orleans' only touchdown. And the unit might have put up better numbers if it didn't have to spend nearly two-thirds of the game on the field because of the offense's inability to sustain drives.

Perhaps the receiver group more than New Orleans' usually steady offensive line. Saints wide receivers have largely struggled to get open through two games — a span in which they have combined for 11 catches and 164 yards receiving. Much of Winston's production in the passing game has come with tight ends or running backs.

Payton Turner. New Orleans' first-round draft pick out of Houston last spring was inactive in Week 1, but had a memorable NFL debut at Carolina with five total tackles and his first sack.

Winston had a passer rating of 26.9 — a new career low — at Carolina after going 11 of 22 for 111 yards, no TDs and his first two interceptions of the season. As much as poor blocking made his life difficult, his numbers were downright dismal by comparison to his 130.8 passer rating in a triumphant five-TD performance without a turnover just one week earlier against Green Bay.

The Saints were missing four starters on defense at Carolina who all played in Week 1: cornerback Marshon Lattimore (hand), defensive back C.J. Gardner-Johnson (knee), linebacker Kwon Alexander (elbow) and defensive end Marcus Davenport (chest). Davenport and Alexander will miss another two games at least while on injured reserve. Lattimore and Gardner-Johnson could return sooner. Saints starting center Erik McCoy also did not play because of a Week 1 calf strain.

6. The number of first downs that Saints offense had in Carolina on Sunday — 22 fewer than the Panthers had.