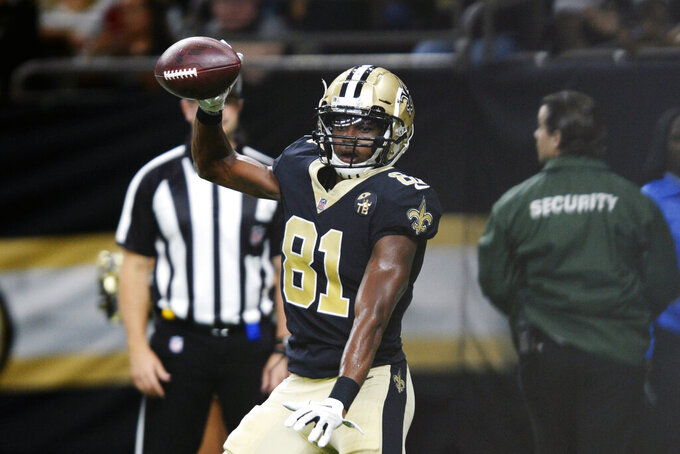 FILE - In this Aug. 30, 2018, file photo, New Orleans Saints wide receiver Cameron Meredith (81) celebrates his touchdown reception in the first half of an NFL preseason football game against the Los Angeles Rams in New Orleans. Saints coach Sean Payton says the club has released veteran wide receiver Cameron Meredith. As recently as 2016, Meredith led the Chicago Bears in receiving, with 66 catches for 888 yards. But he missed all of 2017 because of a major knee injury. (AP Photo/Bill Feig, File)

METAIRIE, La. (AP) — New Orleans Saints have released veteran wide receiver Cameron Meredith, who has struggled to work his way back from a major knee injury in 2017.

"The injury he had set him back, and then some of these younger guys now have just been doing a good enough job. And it's hard with the numbers," coach Sean Payton said when announcing the move on Monday. "It's unfortunate because he's someone that has worked hard. He's worked his tail off. And yet it was going to be hard for him to catch this group of younger guys that are competing."

As recently as 2016, Meredith led the Chicago Bears in receiving, with 66 catches for 888 yards.

He became a restricted free agent after his 2017 season was wiped out by torn ligaments in his left knee and signed a two-year, $9.5 million offer sheet from the Saints that Chicago declined to match.

The Saints hoped the 6-foot-3, 207-pound Meredith would enjoy a resurgence and provide quarterback Drew Brees with a big, sure-handed target in much the same way franchise all-time leading receiver Marques Colston had done before his retirement after the 2015 season.

But the 26-year-old Meredith played in only six games for New Orleans — catching nine passes for 114 yards and one touchdown — before spending the rest of 2018 on injured reserve because of a setback to his knee.

Meredith participated in just three training camp practices this past week before the Saints decided to move on without him.

"There was always that up and down. But he cleared (medical evaluations) and was back full-go," Payton said. "It was still a matter of us really looking at the roster fit."

Payton said the Saints knew there was some risk in signing Meredith but won't necessarily shy away from pursuing other players who are trying to come back from injuries and who've had a history of being productive before they were hurt.

"It's part of the deal," Payton said. "You know, we don't regret signing Drew."

Brees, the NFL's all-time leader in yards passing (74,437), was coming off major throwing shoulder surgery and had been cut loose by the Chargers when the Saints first signed him as a free agent in 2006.

The Saints have few veteran receivers on their roster, but a number of promising young ones.

Top receiver Michael Thomas is entering his fourth season but has yet to practice since training camp opened as he holds out for an extension expected to be in the range of $18 million to $20 million per season. Ted Ginn Jr. is 34 and entering his 13th season. Tre'Quan Smith, a 2018 third-round pick, is the only returning member of the Saints' receiving corps other than Thomas who had as many as 20 catches last season.

None of the other returning receivers have more than two previous seasons of NFL experience, but the Saints added seven-year veteran Rishard Matthews in June. Meanwhile, rookies such as Emmanuel Butler and young, relatively inexperienced pros such as Simmie Cobbs Jr. have stood out with catches they've made in 11-on-11 drills. Payton has mentioned the 6-foot-4 Butler as a player who has impressed.

The 6-foot-4, 327-pound Omameh has played six seasons with four teams: Tampa Bay, Chicago, Jacksonville and the New York Giants. He has started 56 games and played primarily at guard.