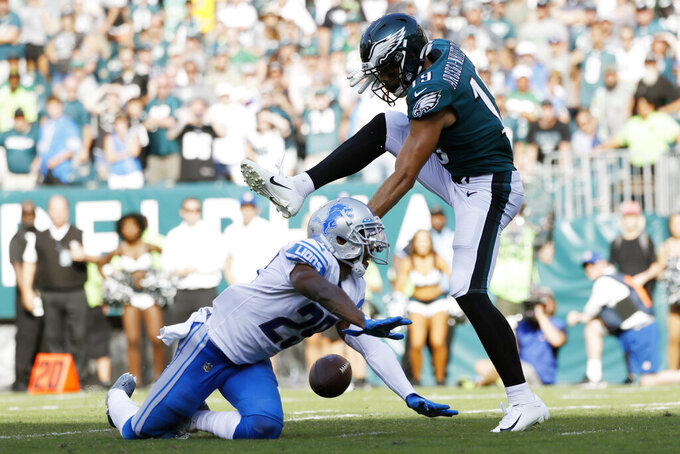 "Catch the ball," he said Monday.

The Eagles (1-2) are two dropped passes on final drives away from possibly being 3-0. Nelson Agholor let a perfectly thrown pass slip through his fingers instead of going for a go-ahead 60-yard touchdown with under two minutes left in a 24-20 loss at Atlanta last week. J.J. Arcega-Whiteside couldn't haul in a deep pass on fourth down in a 27-24 loss to Detroit on Sunday.

"It's just focus and concentration and we have to make sure that we do a better job there and we just continue to work it in practice, throw it to them, whether it's in individual work or get on the JUGS machine, like guys do before and after practice," Pederson said. "We have to continue to do that."

DeSean Jackson is out with an abdomen injury and Alshon Jeffery has a calf strain. Agholor, Arcega-Whiteside and Mack Hollins not only had issues holding onto Carson Wentz's passes, but there were times they just couldn't get open. The line didn't block well and Wentz held the ball longer than he needed at times, too.

Wentz has been sacked six times and absorbed 14 hits in the past two games.

"It could be that he's trying to make a play so he's hanging on to the ball just an extra tick, receivers trying to separate at the top of the route," Pederson said. "There are a lot of factors that go into that. Scrambles go into that. So it's not all on one person. We have to look at that as an offense and stay out of third-and-long situations."

The Eagles are converting third downs better than every team except Dallas, though extending drives isn't always translating into points because of five turnovers. Philadelphia is 27 of 48 (56.3. The Cowboys are first with a 58.1 conversion percentage.

The defense has only two sacks in three games and one came on a blitz. The unit barely touched Matthew Stafford and the inability to generate pressure is making it more difficult on the secondary.

Rookie running back Miles Sanders fumbled twice on the same drive. He had his most productive game otherwise, catching two passes for 73 yards and rushing for 53. However, his ball security is a concern.

Arcega-Whiteside has played 130 snaps the past two games, only been targeted seven times and has two catches.

The Eagles have a quick turnaround. They visit the Packers (3-0) on Thursday night, trying to avoid a 1-3 start.