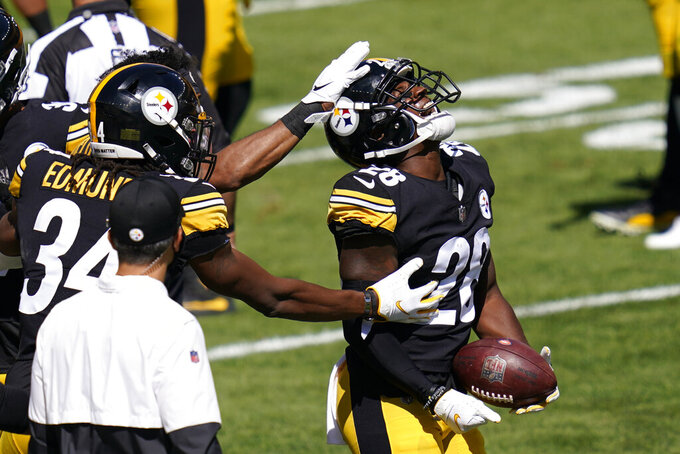 PITTSBURGH (AP) — A game seemingly in hand suddenly on the cusp of slipping away, Pittsburgh Steelers head coach Mike Tomlin didn't overthink things. His team's defense is built on one principle: attack.

Needing a stop to turn back the surprisingly resilient Denver Broncos, the Steelers dialed up one final blitz in an afternoon filled with them.

Safety Terrell Edmunds raced in unblocked to take down Denver backup quarterback Jeff Driskel on fourth-and-2 at the Pittsburgh 15 with less than two minutes to play to preserve a 26-21 victory Sunday. The sack was Pittsburgh's seventh of the day.

“That's just the code we live by," Tomlin said, later adding, “I wouldn’t necessarily call it a game plan, it’s just our personality."

A personality his team believes can carry it into January and beyond. There's still plenty to work on; the Steelers (2-0) committed 10 penalties and turned it over twice.

So the Broncos (0-2) hung around despite losing starting quarterback Drew Lock (right shoulder) in the first quarter.

Driskel led an unlikely comeback despite taking six sacks and absorbing 17 hits. Denver trailed by 14 points at halftime and 12 in the fourth quarter — but was 15 yards away from a stunning upset before Edmunds came off the edge and sent Driskel to the turf one last time.

“I thought in lieu of all the circumstances, going against a good defense, I thought (Driskel) did an admirable job and he’ll only get better if we have to continue with him,” Broncos head coach Vic Fangio said.

Lock wore a sling over his right arm following a very strange case of deja vu. He missed three months in 2019 after injuring his right thumb while stumbling to avoid a sack.

Midway through the first quarter he was tripped up in the backfield by linebacker T.J. Watt and staggered to his right before linebacker Bud Dupree crashed on top of him, driving Lock's throwing shoulder into the ground.

Instead, he fumbled. The Steelers recovered and went downfield for a touchdown while Lock was in the blue medical tent getting evaluated. He attempted to throw the ball but it “felt funny."

Driskel completed 18 of 34 for 256 yards with two touchdowns and a pick and absorbed that serious pounding. Still, he had the Broncos in position to win it until Edmunds' No. 34 swallowed him up with the game on the line.

Tomlin will take a somewhat ugly win over the alternative.

“We understand early in the season we’re not going to be perfect (but) we were good enough to win,” Tomlin said.

Ben Roethlisberger threw for 311 yards with two touchdowns and an interception in his second game back from right elbow surgery. The 38 year old connected on 29 of 41 passes, including a rainbow down the left sideline to rookie Chase Claypool that turned into an 84-yard touchdown.

Still, he wasn't exactly thrilled on a day the Steelers never trailed but struggled to put the Broncos away.

“The good news is when you play poorly and you still win the football game, that’s something to be thankful (for),” Roethlisberger said. “I just need to trust myself making the throws. The guys are in the right spot."

The Steelers spent a portion of the week dealing with a self-inflicted public relations mess after putting the name of Antwon Rose Jr. — a Black Pittsburgh teenager shot in the back and killed by a white East Pittsburgh Police officer in 2018 — on the back of their helmets last week against the Giants. Left tackle Alejandro Villanueva called an audible and put the name of fallen U.S. soldier Alwyn Cashe on the back of his helmet instead. Villanueva opted to honor Cashe again Sunday while center Maurkice Pouncey, a longtime police advocate, used the space to pay tribute to fallen officer Eric Kelly, who was killed in the line of duty in 2009.

While all Steelers stood for the national anthem, Claypool, a Canadian, raised his right fist. He said he considers himself a “visitor” in the United States but wanted to provide some sign of unity.

Steelers RB Conner, who left the win over the Giants with a sprained left ankle, finished with 106 yards rushing, including a 59-yard sprint after Edmunds' sack that let Pittsburgh run out the clock.

Broncos: host Tom Brady and the Buccaneers next Sunday. Brady went 7-6 against Denver while playing for the Patriots.

Steelers: welcome the Texans next Sunday in the first-ever “Watt Bowl.” The game will feature Steelers outside linebacker T.J. Watt and fullback Derek Watt facing older brother J.J. Watt, the standout defensive end for the Texans.