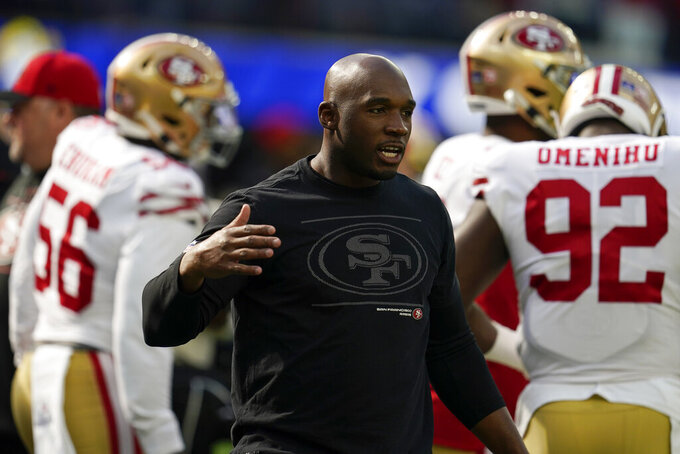 FILE - San Francisco 49ers defensive coordinator DeMeco Ryans greets a player before the team's NFL football game against the Los Angeles Rams on Jan. 9, 2022, in Inglewood, Calif. In Week 3, the 49ers allowed Aaron Rodgers and the Green Bay Packers to drive for the winning field goal in the final 37 seconds. Since then, the Niners have been one of the league's stingiest defenses. The defense for the 49ers is a big reason why the team gets another shot at the Packers in a divisional round playoff game on Saturday night in Green Bay. (AP Photo/Marcio Jose Sanchez, File)

Ryans' defense allowed Aaron Rodgers and the Green Bay Packers to drive for the winning field goal in the final 37 seconds of a 30-28 loss that raised questions if the 37-year-old former linebacker was ready to be in charge of an NFL defense.

“Week 3 seems like so long ago, but I’m happy for Week 3. I’m very happy for Week 3,” Ryans said this week as the 49ers prepare for a rematch against the Packers in a divisional round playoff game Saturday night in Green Bay.

“I think it was a definitely a pivotal moment in our season. Just defensively, for guys just making the turnaround and really changing.”

The turnaround wasn't instant, as the loss started a 1-5 stretch for the Niners that also included a series of pass interference calls that led to a loss to Indianapolis and a string of missed tackles in a loss to a short-handed Arizona team.

But since then, the Niners have been one of the league's stingiest defenses, ranking in the top five in yards per play allowed, points allowed, sacks and yards rushing allowed.

The defense for the 49ers (11-7) is a big reason why the team gets another shot at the Packers (13-4) in a divisional round playoff game on Saturday night in Green Bay.

“I think the best thing he did was remain the exact same person every day, through the highs and lows,” linebacker Fred Warner said. "Even though we had some rough patches, we had the right foundation, so over time, with more repetition, you’re going to get better.”

Ryans has gotten better as a coordinator as well as he has filled the big shoes left by Robert Saleh, who helped put together a defense that got San Francisco to the Super Bowl two years ago and then left after last season to be head coach for the New York Jets.

He has put his own tweaks on the defense and kept it at its high level despite several key injuries.

The 37-year-old Ryans was a star linebacker in the NFL for a decade, winning Defensive Rookie of the Year in 2006 and being an All-Pro the next season.

His playing career ended following the 2015 season and he joined coach Kyle Shanahan's staff in San Francisco as a defensive quality control coach in 2017. Ryans was promoted to inside linebackers coach the next season and then coordinator when Saleh left.

“I’ve seen head coach qualities out of DeMeco when he was a player,” said Shanahan, who was on the offensive staff in Houston when Ryans was a player. “When he was a quality control, when he was a linebacker coach and now when he is a coordinator. So he’s always had those qualities, it’s just about him getting the reps and getting the experience.”

Ryans is getting notice as well and has interviewed for the head coach opening in Minnesota on the heels of a couple of particularly impressive defensive performances.

The Niners held the Rams to 24 points in a Week 18 win that sent San Francisco to the playoffs and then San Francisco held Dallas to 17 points last week in one of the Cowboys worst offensive performances of the season.

None of it comes as a surprise to Packers coach, Matt LaFleur, who saw Ryans up close as a player during his team as an assistant on the Texans in 2008-09.

“He was the quarterback of the defense," LaFleur said. "When I found out that he was going to get into coaching, it definitely always crossed my mind that he would be a hell of a coach. He’s proven that. I’ve got a lot of relationships with a lot of guys over on that staff, and everybody speaks the world of him.”