49ers defense to get big boost from healthy Nick Bosa 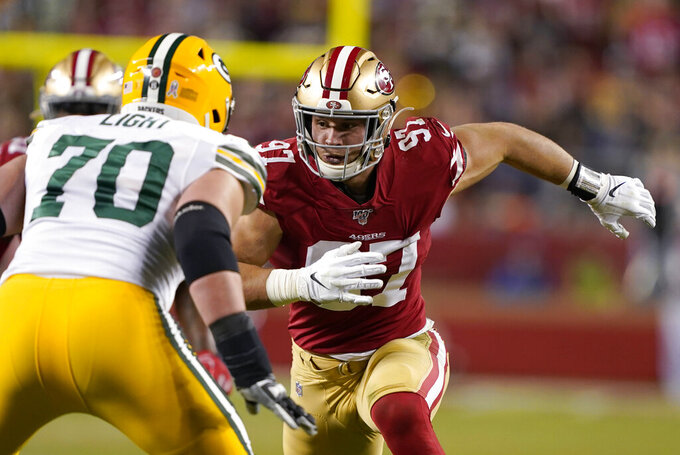 FILE - In this Nov. 24, 2019, file photo, San Francisco 49ers defensive end Nick Bosa (97) rushes against Green Bay Packers offensive guard Alex Light (70) during the first half of an NFL football game in Santa Clara, Calif. After nearly a year-long wait, the Niners can't wait to see Bosa's dominance in a game when he returns from a knee injury in the season opener at Detroit on Sunday. He’s a game wrecker,” linebacker Fred Warner said. “He’s one of those guys that has that ability.” (AP Photo/Tony Avelar, File)

Now, after nearly a year-long wait, the Niners can't wait to see Bosa's dominance in a game when he returns from a knee injury in the season opener at Detroit on Sunday.

“He’s a game wrecker,” linebacker Fred Warner said. “He’s one of those guys that has that ability.”

When Bosa went down with a season-ending torn ACL in a Week 2 win over the New York Jets last season, a Niners defense that was dominant on the way to a Super Bowl appearance in 2019 lost a bit of its edge.

San Francisco still managed to field a more than capable unit without Bosa on the field but having a player as disruptive as him will only make it better.

Bosa has been practicing for a few weeks and is now ready to play against the Lions.

“It’s like riding a bike," he said. "The first day I was out there I was hitting moves that felt like I had been practicing for a while. Once you’ve taken as many reps as I have in college and pros, it kind of comes back to you quick. Obviously, you need to rep it to make sure it’s ready for the season. But it came back pretty quick.”

Bosa hopes to build on his success in 2019 when he won the Defensive Rookie of the Year award. He had a staggering 102 quarterback pressures in the regular season and playoffs, according to Pro Football Focus, to go along with 13 sacks, 19 tackles for loss and 30 quarterback hits.

The Niners believe he is in even better shape physically heading into 2021 after his long work back in Florida doing rehab.

“Nick has been outstanding,” left tackle Trent Williams said. “I don’t know how he could have got stronger, but he did. Very few people come back from major injury and are better than they were when they left. I played Nick before he left and I played when he got back and he’s better."

While Bosa has looked like his old self on the practice field, he didn't appear in a preseason game so the Niners haven't seen it against an opponent.

Defensive coordinator DeMeco Ryans said it might take a few plays for Bosa to feel back in the groove.

“He’s been able to work on his technique,” Ryans said. “He hopped right back in and has actually done better that when he first started. I’m excited to see him against live competition on Sunday. I’m excited to watch him.”

Bosa isn't the only accomplished pass rusher returning to the field this week for San Francisco. Dee Ford is also back after playing only the opener last season before being sidelined by a back injury.

When the Niners defense was at its most dominant in 2019, it featured both Ford and Bosa coming off the edge with Arik Armstead and DeForest Buckner inside. Buckner was traded before last season but the other ingredients could be in place with Samson Ebukam providing depth on the edge and Javon Kinlaw inside.

With so many capable players, Ford believes there's little difference between starter and backup and he will be given time to work into top form.

“Like with any injury, we’re going to start on a pitch count,” Ford said. “That’s standard for any injury. But my role is to do what they brought me here to do, make big plays. So that’s what I’m going to do.”