49ers get needed good news with negative test for Bourne 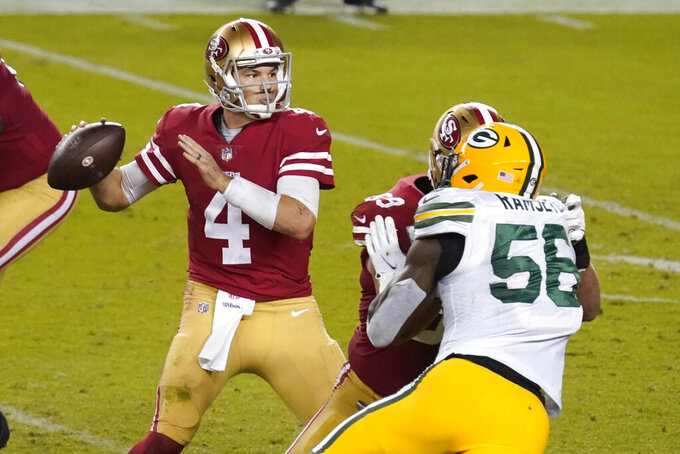 SANTA CLARA, Calif. (AP) — After a week filled with bad news from injuries, a positive coronavirus test and a lopsided loss to Green Bay, the San Francisco 49ers finally got a piece of good news.

Receiver Kendrick Bourne tested negative for COVID-19 for a second straight day Friday, clearing the way for him and close contacts Brandon Aiyuk, Trent Williams and Deebo Samuel to return to the team.

Unfortunately for the 49ers it’s too late to help this week because San Francisco already played Thursday night and lost 34-17 to the Packers.

“I know it’s frustrating, but it is what it is,” coach Kyle Shanahan said Friday. “That’s what everyone in this world’s got to deal with right now. They’re doing that for the safety. Unfortunately, it wasn’t necessary, but I get why it did happen. So, got to deal with it and we obviously dealt with that last night. So, hopefully it won’t happen going forward.”

The Niners paid the price for the rules when they were forced to play without their two projected starting receivers for the game, Bourne and Aiyuk, as well as their starting left tackle in Williams. Samuel was already ruled out of the game with a hamstring injury.

Backup tackle Justin Skule allowed six pressures, according to Pro Football Focus, including one that led to an interception late in the first half that helped Green Bay open up a big lead.

“That’s the most frustrating part, we know that we can be so much better,” backup quarterback Nick Mullens said. “Even with the guys that we had on the field, myself included. We really feel like we can be a lot better and so with these couple of days away, just regroup, reset, and just foot on the gas for these upcoming weeks.”

Mullens to Richie James Jr. connection. James took on the big role meant for Aiyuk before he was forced to miss the game and caught nine passes for 184 yards and one TD. James entered the game without a catch since last November and had more yards in one game than he had in each of his two previous seasons. The only other 49ers players with at least 184 yards receiving and a TD in a game since the merger are Jerry Rice (four times), Terrell Owens, Kittle, John Taylor and Anquan Boldin.

Health. With only one game in a 23-day span, the Niners have a chance to get healthy for the stretch run. Shanahan said he’s hopeful Mostert (ankle) and Samuel can return for next week’s game at New Orleans. He also said Garoppolo doesn’t need surgery on his injured right ankle and could return in December.

Jordan Willis. It was hard to find any bright spots from this game, but the recently acquired Willis offered some hope. In his second game since being acquired from the New York Jets, Willis had the only sack for San Francisco.

Trent Taylor. With Taylor the only active receiver who had caught a pass in the NFL this season, it figured that he would be a big part of the offense. Instead, Taylor caught one pass for 9 yards on four targets as he struggles to get back to the form he showed as a rookie when he had 43 catches in 2017. Taylor struggled in 2018 and missed all of last season with a foot injury. He’s healthy this year but has only 10 catches for 86 yards in nine games.

S Jaquiski Tartt left the game with a toe injury that the team believes is turf toe. ... CB K’Waun Williams left with an ankle injury.

22 — The 49ers are the 22nd defending conference champion to have a losing record through nine games, according to ESPN. Of the previous 21, only the 2018 Eagles, 2015 Seahawks and 1995 Chargers ended up making the playoffs.