49ers look to get defense back on track vs Rams 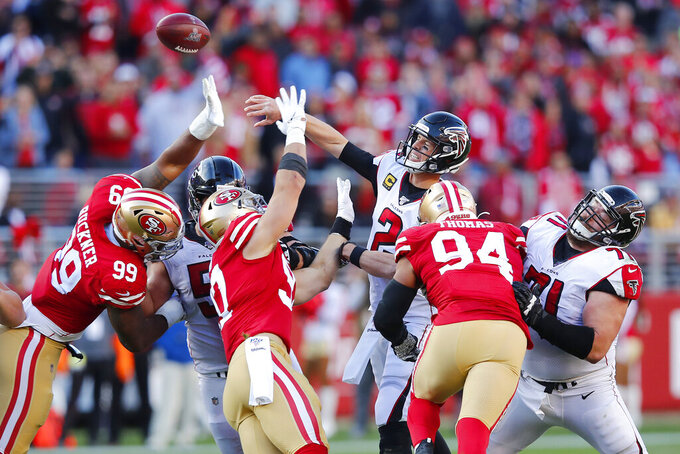 Whether it's because of attrition from injuries to key cogs like Dee Ford and Kwon Alexander or facing a slate of more talented quarterbacks, the Niners (11-3) head into the rematch with the Rams (8-6) on Saturday several questions about the defense.

A unit that ranked second in the NFL with only 11 points allowed the first seven games has given up 25.9 per game over the last seven as quarterbacks like Kyler Murray, Russell Wilson and Drew Brees found plenty of success moving the ball.

"From a statistical standpoint, it was almost historic over those first (seven) games," defensive coordinator Robert Saleh said. "I almost feel like we kind of spoiled people."

The 49ers were at their best in a stretch surrounding the first game against the Rams, a 20-7 victory for San Francisco. The Niners allowed only 23 points during a four-game stretch, holding all of those teams to 100 yards or fewer passing.

But that kind of play has been lacking of late with Alexander on injured reserve with a torn pectoral; Ford out with a hamstring injury; safety Jaquiski Tartt missing the past two games with injured ribs; and cornerback Richard Sherman sitting out last week.

That has contributed to San Francisco getting only three sacks the past three games and only one interception over the past seven contests.

“The more we have had people out, I think the chances of turnovers does go down, but if we want to win we've got to find ways to create them and hopefully our guys can get going and create some more," coach Kyle Shanahan said. “If not, we've got to do something schematically, but it's tough to win when you don't get turnovers and we've got to make sure we find a way to do it."

While the 49ers have gotten worse defensively since the first meeting, Goff has played much better than he did that day when he went 13 for 24 for 78 yards, setting career lows in yards and yards per attempt (3.3).

That was part of a midseason slump for Goff, who then failed to throw a single TD pass in three games in November.

But he has bounced back since and has averaged 333.7 yards passing the past three weeks, with two TD passes in each game.

“Hopefully, we'll have a better showing, but we certainly know what a great challenge it will be, because of what a great job Robert Saleh does leading the way, and then all the great players that they have executing the scheme," coach Sean McVay said.

WHICH DEFENSE SHOWS UP?

The Rams defense has been among the NFL's steadiest, most dependable units in 11 of its 14 games. The other three — losses to Tampa Bay, Baltimore and last week against Dallas — were awful. The coaching staff has struggled to explain those blips from a defense that has held every other opponent under 28 points, including the Niners in October.

"If I knew, I'd change it," coordinator Wade Phillips said. "Or I'd change something going into it."

The 49ers have done a good job spreading things out in the passing game this season until last week, when George Kittle, got almost all the work. Kittle was targeted 17 times in the loss to the Falcons, one more than the rest of the team combined. Atlanta played more man defense than usual and Kittle was able to win his one-on-one matchups and finished with 13 catches for 134 yards.

"Usually it's not like that," Shanahan said. "We don't always want it to be like that, but we also don't mind if we get the win. We thought we had a chance to, but that wasn't why we lost."

Todd Gurley missed the Rams' first meeting with San Francisco to rest a bruised thigh. He has played in only five of a possible nine games against the Niners during his career because of various injuries and rest, and he has only two 100-yard games against Los Angeles' upstate rivals.

"I feel like when I do play against them, I usually do fairly well," Gurley said before incorrectly suggesting he didn't play against the Niners during his rookie year back in St. Louis (he played once and rushed for 133 yards).

The formerly prolific running back has only two chances left to get his first 100-yard rushing game of the season, snapping a streak of 15 consecutive regular-season games without hitting triple digits. He is a modest 18th in the league with 741 yards rushing.

With injuries to the defensive line, rookie Nick Bosa has had to carry a much bigger load of late. He has gone from playing an average of 38.4 snaps over the first eight games to 58.3 the past six games. Seven of Bosa's nine sacks came during the stretch when he got more time off, but he doesn't plan to conserve energy now that he is playing more.

"I definitely don't pace myself," he said. "Maybe I need to learn how to. I just go hard every play. It may end up biting me at the end.''

Garoppolo shouldn't have much trouble deciding which side of the defense to target on most plays. Daunting Pro Bowl cornerback Jalen Ramsey will be minding one receiver, while unsung veteran Troy Hill or second-year backup Darious Williams will be on another wideout. The Rams haven't decided whether Hill will even attempt to play with protection on his hand after breaking his thumb last week and undergoing surgery. If he can't go, the undrafted Williams, who played 61 of his 111 career defensive snaps last week in Dallas after Hill got hurt, is likely to make his second career start.