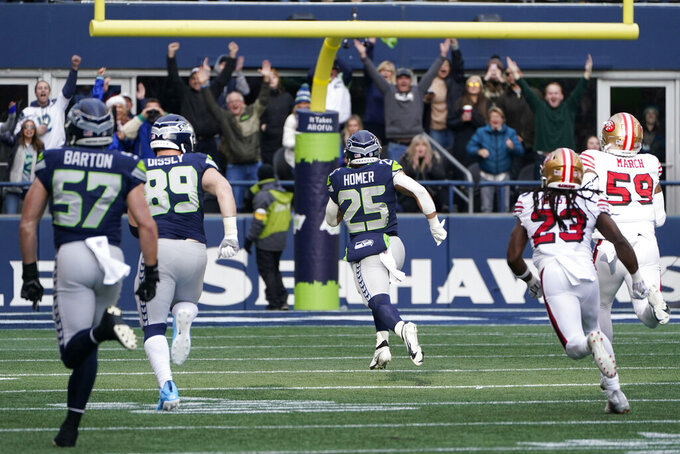 Seattle Seahawks running back Travis Homer (25) runs for a touchdown against the San Francisco 49ers during the first half of an NFL football game, Sunday, Dec. 5, 2021, in Seattle. (AP Photo/Elaine Thompson)

The unit has given up touchdowns on a kick return and fake punt, turned the ball over once, missed a couple of kicks and allowed a few other big returns.

Those kinds of errors and miscues eat away at coordinator Richard Hightower.

The Niners (6-6) survived the problems two weeks ago against Minnesota when they managed to overcome Kene Nwangwu's 99-yard kickoff return and Robbie Gould's missed field goal and win.

That wasn't the case last week when Seattle scored on a fake punt, Travis Benjamin fumbled away a kickoff, Gould missed an extra point and another long kick return led to a TD drive in the Seahawks' 30-23 win.

The game got off to a tough start with special teams standout Trenton Cannon getting hurt on the opening kickoff. Cannon had to be taken by ambulance to the hospital with a concussion and remained there overnight before flying home.

The problems only mounted from there after San Francisco forced a punt on the opening drive. Hightower tried to set up a big return by double teaming both gunners and having six other players on the line.

But the Niners paid the price when the Seahawks snapped the ball to upback Travis Homer, who raced 73 yards untouched for the score.

“The thing about that play is everybody does it," Hightower said. "Everybody’s done it before. It’s not like people don’t do it. People do it. We were in a situation where if they did it right there, it was going to be the perfect play and they got us.”

It was the first fake punt TD since Tennessee's Kevin Byard threw a 66-yard TD pass to Dane Cruikshank in a 20-17 win over Houston on Sept. 16, 2018, and the longest since Pittsburgh's Chris Hope caught an 81-yard pass from punter Josh Miller in 13-10 loss to Baltimore in the 2003 finale.

But it wasn't the only issue in the game as Benjamin lost a fumble on the opening kick of the second half and the Seahawks scored a TD on a drive that started at their 37 after a good kick return.

“We can’t have those plays happen and expect to win,” Hightower said. “I know that and I have to get better as a coach and all those guys in the locker room are telling me, ‘Hey, we have to play better.’ And I’m telling them, ‘No, I have to coach better.’ And that’s what kind of family we have. That’s what kind of team we have. So I just have to be better as a coach.”