6-2 Giants not expecting a gimme against 1-win Texans 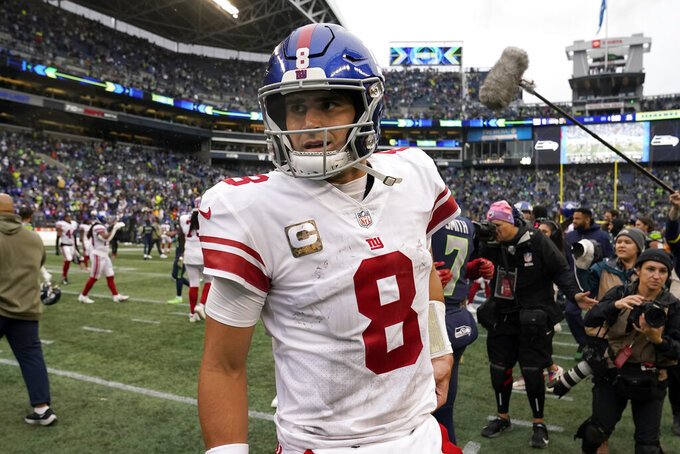 EAST RUTHERFORD, N.J. (AP) — After seeing the New York Giants get off to a great start under first-year coach Brian Daboll, Justin Ellis wanted to share some thoughts — and a warning — with his teammates.

The 31-year-old defensive tackle is in his ninth NFL season and spent the last two-plus years with the Ravens and was part of their teams that went 14-2 and 11-5 and went to the playoffs. Known to his teammates as ‘Jelly,’ he was also in Baltimore when they opened last season at 6-2 and finished 8-9, missing the postseason.

It's something that's spot on as the Giants (6-2) come out of their bye week to face the Houston Texans (1-6-1) on Sunday at MetLife Stadium.

Ellis said looking at the Texans' record and thinking it's going to be an easy game is a mistake.

“You have to have the right mindset,” Ellis said. “The one thing about the NFL is on any given Sunday, so you’ve got to come every Sunday. Every team has talent.

"So with that being said, you’ve got to earn it every week. And I think those guys are close in a way.”

Houston has had 10 days to prepare for the Giants after playing well in a 29-17 loss to the undefeated Philadelphia Eagles. They also played well the previous week in dropping a 17-10 decision to the AFC South-leading Tennessee Titans.

Texans wide receiver Chris Moore appreciates what the Giants have done this season and hopes his team can make a turnaround, too.

New York came into this season having had five straight losing seasons, including a 4-13 mark last season.

“Like I’ve been saying, at the end of the game, we’ve got to find a way to win," Moore said. "We’ve been in a lot of games where it could’ve went our way. We just failed to execute, failed to make that play to turn it our way. That’s really all it takes.

"We’re there in the third and fourth quarter almost every game. We’ve just got to find a way to win.”

That's what the Giants have done this season. They have overcame deficits five times in the second half.

Many fans and media were ready to write off Giants running back Saquon Barkley after he struggled in 2021 coming off an ACL injury.

Barkley, who was the NFL Offensive Rookie of the Year in 2018, is third in the NFL in both yards rushing (779) and yards from scrimmage (968). The Texans have the league’s worst defense against the run. He also leads the Giants in total receptions with 28.

The Texans are looking to improve in the second half. Coach Lovie Smith hopes some of the work they’ve done through the first part of the season will equate to more success in the last nine games.

“If you keep doing the right things in practice and guys learn, eventually you’ll get over the hump,” Smith said. “That’s been my history I’ve seen, and I’m hoping that’ll be the case.”

The Giants will be looking to fill a major hole in their defense with top safety Xavier McKinney out for at least the next month.

He had an accident on an all-terrain vehicle while vacationing in Mexico last week and needed surgery on his left hand.

Rookie Dane Belton will have the primary job of replacing him with Landon Collins and Jason Pinnock helping out.

A bright spot in Houston’s disappointing season has been the play of rookie running back Dameon Pierce. The fourth-round pick from Florida ranks sixth in the NFL with 678 yards rushing. He has two 100-yard rushing games this season with the last coming in a career-high 139-yard performance in a loss to Philadelphia last week.

He's a serious candidate for offensive rookie of the year.

“He has done a really great job up to this point, (but) I don’t want to get started talking about that too early,” quarterback Davis Mills said. “He’s still got a lot of games ahead of him to go out and play and perform.”

TIME TO STEP UP

The Giants are in desperate need of help at wide receiver with Sterling Shepard (ACL) out for the season and 2021 first-round pick Kadarius Toney traded to Kansas City because he could not stay on the field because of injuries.

Kenny Golladay has been a bust since signing a $72 million contract in the spring of last year. He has 39 catches and has yet to catch a touchdown. He missed the last four games with a knee injury. He had two catches for 22 yards in the first four games.

It might be his last chance to shine in the New York area.