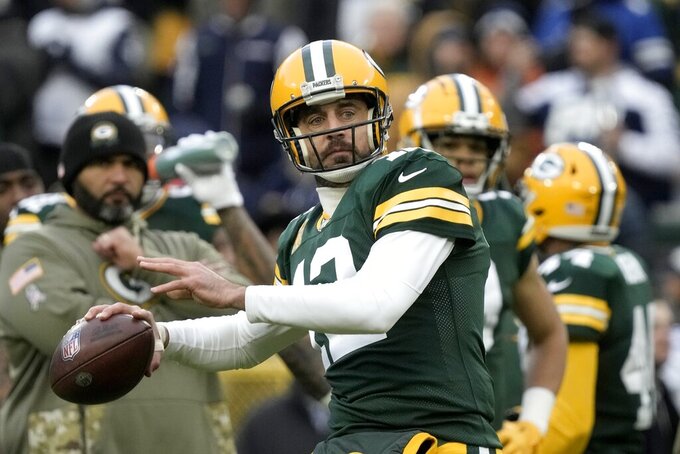 Aaron Rodgers has won plenty of games throughout his career so it’s no surprise he’s been successful on Thursday nights, going 11-5.

Rodgers and the Green Bay Packers need another win this week against the AFC South-leading Tennessee Titans to help them climb into the playoff race after a poor start. The Packers (4-6) snapped a five-game losing streak with an upset over the Dallas Cowboys. They’re back at Lambeau Field to take on the Titans (6-3).

“It’s obviously a big advantage for us to sleep in our own beds and have our crowd, but I think it just comes down to the study time, just being locked in,” Rodgers said. “These are long days. We’re going through a lot of different plays. We’re cramming it in, two days into one day.”

Rodgers has thrown 15 touchdowns with one interception and has a 112.5 passer rating in his past six Thursday games.

With a trip to Philadelphia to face the Eagles (8-1) up next, the Packers have a tough road to get back to .500. Led by Derrick Henry, the Titans have won six of seven after opening with two losses.

The Packers are 3-point favorites, according to FanDuel Sportsbook. Pro Picks likes the Packers because they’re already a desperate team in November.

The Commanders have won four of five to reach .500 after handing the Eagles their first loss of the season. It’s a tough spot for the Commandeers (5-5) against the Texans (1-7-1). Short week, back-to-back road games, coming off an emotional win against a divisional rival is a setup for a letdown.

Detroit (plus 3) at New York Giants

Saquon Barkley is facing the second-worst run defense so the Giants (7-2) can run it all day against the Lions (3-6).

Baker Mayfield is back under center for the Panthers (3-7). The Ravens (6-3) have won three in a row and coming off a bye.

Josh Allen needs to stop turning the ball over in the red zone or the Bills (6-3) won’t live up to Super Bowl expectations.

Philadelphia (minus 6 1/2) at Indianapolis

The Eagles (8-1) weren’t going to go undefeated. The Colts (4-5-1) are undefeated under interim coach Jeff Saturday.

The Jets (6-3) bounced back from a home loss to the Patriots with a huge upset over the Bills before a bye. The Patriots (5-4) have won four of five.

Chicago (plus 3) at Atlanta

Justin Fields is showing dynamic playmaking ability for the Bears (3-7). The Falcons (4-6) are only one game out of first in a weak NFC South.

Two first-year coaches who’ve been major disappointments. The Raiders (2-7) are going for the season sweep against the Broncos (3-6).

An 8-1 team coming off a road win against a Super Bowl favorite is somehow a home underdog. The Vikings are getting no respect from oddsmakers. This is the ultimate definition of the line dictating the pick.

Cincinnati (minus 4 1/2) at Pittsburgh

Which version of the Bengals (5-4) shows up? The Steelers (3-6) already beat them in Cincinnati in Week 1.

The injury-depleted Chargers (5-4) may be getting wideouts Mike Williams and Keenan Allen back. The Chiefs (7-2) have taken first place in the conference and don’t want to look back.

San Francisco (minus 8) at Arizona in Mexico City

The Cardinals (4-6) have a better chance with “home” games outside Arizona considering their record at home under Kliff Kingsbury. The 49ers (5-4) have their sights set on first place.