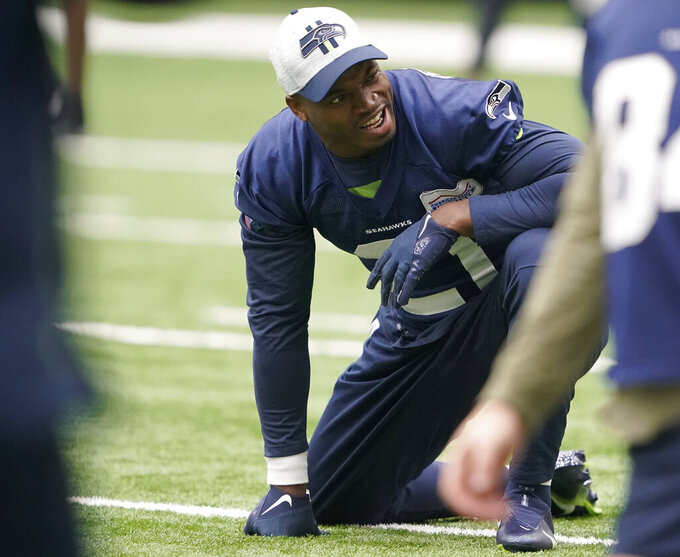 Peterson was signed this week by the Seahawks due to concerns about depth at running back. Alex Collins, Rashaad Penny and Travis Homer are all dealing with injuries that left DeeJay Dallas as the only healthy running back on the roster.

Carroll didn’t say it was a certainty Peterson would be elevated, but said the 36-year-old was ready if called upon.

“It’s probably hard for people on the outside to understand an impact that a guy with this kind of background can make and at a time when we’re battling to try to win a game and get going,” Carroll said. “He jumped in here and had a remarkable influence on the week. With three guys banged up at the spot we’ll see how it goes on the weekend.”

Peterson appeared in three games earlier this season for Tennessee following a season-ending injury suffered by Derrick Henry. Peterson started two games and had 27 carries for 82 yards and a 3.0-yard average per rushing attempt and one touchdown run.

His longest run, 16 yards, came against Houston. Peterson was released by the Titans on Nov. 23.

Now in his 15th season, Peterson is a four-time All-Pro, seven-time Pro Bowl selection, was the 2012 league MVP and is likely bound for the Hall of Fame.

Peterson said Thursday that it was his goal to show Carroll and the other offensive coaches enough in practice to be active for Sunday’s game.

“I feel like I can still compete at a high level. Just having opportunities to help teams, to inspire guys, that’s one of the most rewarding things,” Peterson said. “When I see guys and they say to me to just keep doing what you’re doing, it’s so inspiring.”

Part of the reason it’s not certain Peterson will play is because Penny (hamstring) and Homer (calf) were able to do more work in practice than perhaps initially expected. Seattle’s run game has been a big part of its dysfunctional offense of late and Collins has carried the load while also dealing with an abdominal injury.

NOTES: Starting LG Damien Lewis is unlikely to play while dealing with multiple issues, Carroll said. Lewis has been bothered by shoulder and elbow injuries and had surgery this week to remove a cyst. ... WR DK Metcalf (foot) and RT Brandon Shell (shoulder) were limited participants on Friday but neither was given an injury designation for the game.