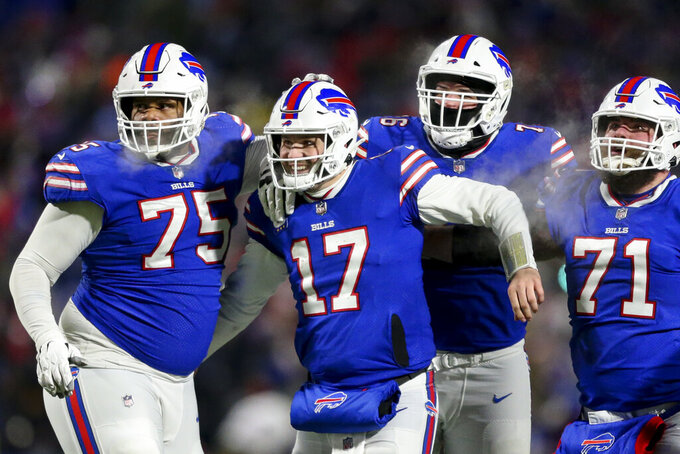 Josh Allen and the Buffalo Bills pitched a near-perfect game in their playoff victory against the New England Patriots.

The Bills became the first team in NFL history to score touchdowns on their first seven drives of a playoff game, before kneeling down on the final possession of a 47-17 win over New England.

The Bills became the first team ever to go an entire game without a punt, a field goal, a turnover or getting stopped on fourth down, while scoring the most points ever against a defense coached or coordinated by Bill Belichick.

Allen went 21 for 25 for 308 yards, five TDs and rushed for 66 yards, joining Kurt Warner (2009 season against Green Bay), Tom Brady (2007 season against Jacksonville), Peyton Manning (2003 season against Denver) and Daryle Lamonica (1969 season against Houston) as the only starting QBs with more TD passes than incompletions in a playoff game.

Mahomes provided his own highlights, throwing five TD passes in a 42-21 win over Pittsburgh to join Lamonica and Kurt Warner as the only QBs ever to throw at least five touchdown passes in two playoff games.

Mahomes' throws came in a span of just 11:31 of game time, the fastest anyone has thrown that many touchdowns in playoff history, according to the Elias Sports Bureau. The previous mark was held by Tom Brady, who did it in 24:56 against Denver in the 2011 playoffs.

Stafford also had a strong playoff debut for the Rams, going 13 for 17 for 202 yards, two TDs and a 154.5 rating in a 34-11 win over Arizona that delivered Stafford his first playoff victory in 13 NFL seasons.

Stafford joined Allen (157.6 rating) and Mahomes (138.2 rating) with big performances. The only other postseason when three starting QBs posted a rating of 135 or better in a game was in 1982 when Joe Theismann (against Detroit), David Woodley (against New England) and Lynn Dickey (against St. Louis) all did it.

Wild-card weekend didn't provide a lot of drama, with three of the six games decided by more than 20 points and another one by 16.

Travis Kelce and Odell Beckham Jr. showed off their arms as well as their catching skills.

One day after Kelce became the first player in NFL history to throw a touchdown pass, catch a TD pass and have at least 100 yards receiving in a playoff game in Kansas City's win over Pittsburgh, Beckham showed off his dual-threat skills.

Beckham threw a 40-yard pass to Cam Akers in the Rams' win over Arizona on Monday night, becoming the first player in NFL history to have a catch and a pass for at least 30 yards in the same playoff game.

Ben Roethlisberger likely made the final appearance of his NFL career in Pittsburgh's playoff loss to Kansas City.

Roethlisberger joined Dan Marino and Andrew Luck as the only QBs since at least 1950 to make a playoff start as a rookie and in their final seasons, according to the Elias Sports Bureau.

The 17-year gap between his first and last playoff start is the second biggest to Brady's 20-year gap.

Even the big guys got in the act of scoring touchdowns in wild-card weekend.

Kansas City offensive lineman Nick Allegretti and Buffalo offensive lineman Tommy Doyle both had TD catches, marking the second time since the merger that two offensive linemen had touchdown catches in a single postseason. The other time it happened was in the 2014 season when New England's Nate Solder and Seattle's Garry Gilliam did it.

The only other offensive lineman with a TD catch in the playoffs since 2000 was Tennessee's Dennis Kelly in the 2019 season.

The Bengals snapped the longest active drought without a playoff win when they beat Las Vegas 26-19 at home, but some others are still ongoing.

The Cowboys have gone 11 straight playoff appearances without reaching a conference title game, the longest streak by any team in NFL history.