Analysis: NFC East goes from least to beast in 2 years 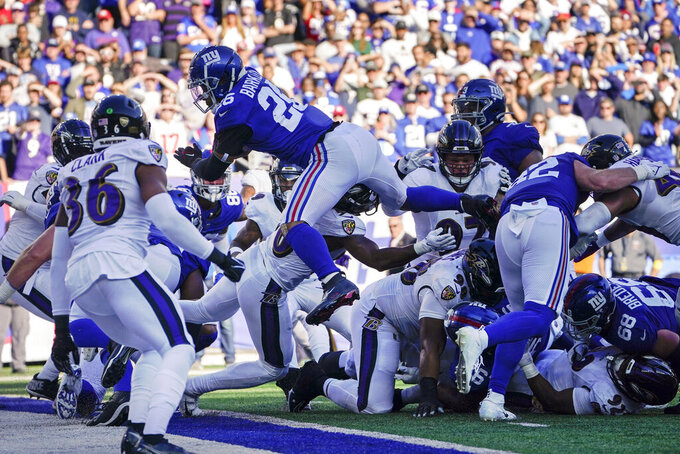 New York Giants' Saquon Barkley (26) dives into the end zone for a touchdown during the second half of an NFL football game against the Baltimore Ravens, Sunday, Oct. 16, 2022, in East Rutherford, N.J. (AP Photo/John Minchillo)

PHILADELPHIA (AP) — The NFC East went from least to beast in less than two years.

After sending a losing team to the playoffs in 2020, the division boasts three of the four NFC teams with winning records through six weeks.

The Philadelphia Eagles (6-0) stand alone atop the East as the only unbeaten team in the NFL following a 26-17 victory over the Dallas Cowboys (4-2) on Sunday night.

The New York Giants (5-1) are right behind Philly after upset wins over the Ravens and Packers in consecutive weeks proved they’re no fluke.

“There’s no doubt this is one of the great rivalries,” Eagles coach Nick Sirianni said after securing his first win over Dallas. “So, of course you want to win the games against the teams in this division, because that’s what’s so cool about this division because these are hated rivalries. Now, they all count the same. That’s still one win. But it’s sweet because this is a cool division.”

For now, it’s the best in football.

The Vikings (5-1) are the only other team in the conference with a winning record. The AFC has just three teams with four wins going into Monday night.

The NFC East hasn’t sent three teams to the playoffs since 2007 when Tony Romo led the Cowboys to a division crown and Washington and New York earned wild-card berths. The Giants went on to beat New England in the Super Bowl, handing the Patriots their only loss of the season.

Considering how inconsistent the rest of the NFC has been, the Eagles, Giants and Cowboys are positioned well for January.

The four NFC teams with the best odds to reach the Super Bowl entering the season — Buccaneers, Packers, Rams and 49ers — are each 3-3 and flawed.

Led by Jalen Hurts, a dominant run game and a strong defense, the Eagles look like legitimate championship contenders.

“What’s exciting about being 6-0 and not having played a complete game is there’s only room to get better and that’s our goal,” Sirianni said.

Rookie coach Brian Daboll has New York headed toward its first winning season since 2016. The Giants have overcome 10-point deficits in the second half in three of their wins.

“This league is hard. It’s not always going to be perfect. There will be a lot of people down on you,” Daboll said. “And you might be down on yourself, wish you could do better. But you keep on getting back up, you keep on swinging, keep on competing, regardless of the score or the situation of the game. And that’s not easy to do, right? That’s not easy to do when you’re down. If you sit on the bench and start ... complaining, that’s easy to do.

“We know we’re a long way away. (It’s the) early part of the season. But we just try to compete and do the best job we can.”

Dallas had won four straight games with backup quarterback Cooper Rush until running into Philadelphia. Rush’s three interceptions cost the Cowboys against the Eagles, but he performed well enough during Dak Prescott’s absence to keep the team in the mix. Prescott said he plans to return this week.

“I’m happy as hell the position we’re in,” Prescott said. “It’s good to be 4-2. I’m not excited we lost, but there’s a long season ahead and we’re in a good position.”

The division hasn’t had a repeat winner since the Eagles captured four straight titles from 2001-04. The Cowboys won it last season but lost a home playoff game to San Francisco. The Eagles earned a wild-card spot last year and were blown out by Tampa in the opening round.

This isn’t the NFC East that won seven of 10 Super Bowls from 1986-95 — that may never be matched — but it’s a long way from being the laughingstock it was during the pandemic-stricken 2020 season when the Giants almost won the division at 6-10. Washington defeated the Eagles in the final regular-season game to finish 7-9 and take the title. Philadelphia, playing for draft positioning, benched Hurts in the second half of that one.

No need for tanking this season.