Another 4th-quarter mess leaves Ravens back at .500 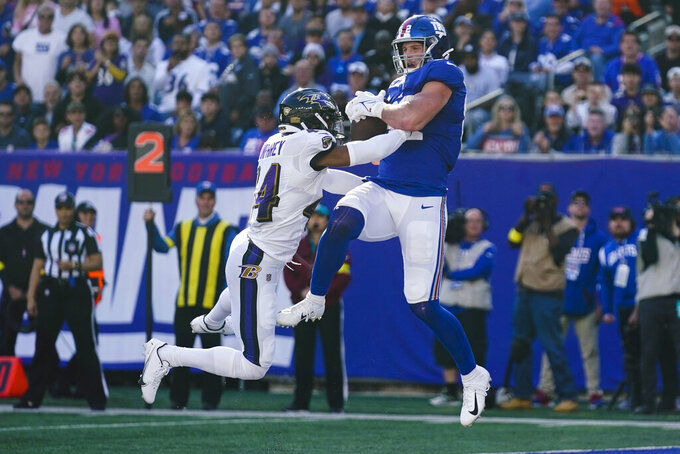 OWINGS MILLS, Md. (AP) — Baltimore coach John Harbaugh can see all the positives from the Ravens' first six games. Almost every week, they've shown signs of being one of the top teams in the AFC.

Their record doesn't reflect that — and they have only themselves to blame.

Sunday's 24-20 loss to the New York Giants was the third time this season the Ravens lost after holding a double-digit lead in the second half. And of all those defeats, this one was probably the most self-inflicted.

“It's very obvious to me, I think when you watch the tape, all the players, all the coaches, what we're capable of,” Harbaugh said Monday. “You've got to get there somehow, some way. And sometimes it's through adversity.”

Baltimore led 20-10 in the fourth quarter before allowing a touchdown with 6:01 remaining that pulled the Giants back within three. The Ravens (3-3) needed a clock-draining drive, and they'd run the ball effectively all day. They seemed like they still had control before several huge mistakes in a short span of time:

— On third-and-1 from the Baltimore 44, quarterback Lamar Jackson ran for 2 yards, but the play was negated because the Ravens lined up wrong.

— After that penalty, Jackson fumbled a poor shotgun snap and then threw a desperate pass into coverage that was intercepted and run back to the Baltimore 13.

— The Ravens had a chance to hold the Giants to a tying field goal, but Marcus Peters was called for pass interference in the end zone on third down. New York scored a touchdown on the next play.

— On Baltimore's first play of the next drive, Demarcus Robinson dropped a pass.

— On the following play, Jackson was sacked and fumbled, giving the Giants the ball back.

Just like that, the Ravens were back at .500, continuing their pattern of alternating wins and losses.

“We just can’t keep beating ourselves up because that’s what it is. It’s not our opponent," Jackson said. "Obviously, it’s an NFL team. They’re good. But I just feel like we’re just beating ourselves with little mistakes here and there.”

As Harbaugh noted, on a down-by-down basis, the Ravens have been quite good at times. They outgained New York 406 yards to 238 and rushed for 211 yards while averaging 8.8 per carry. Their run blocking was particularly impressive, and opposing teams are still having a hard time containing Jackson when he runs the ball.

“We're going to keep pounding the rock, and that rock's going to crack, and we're going to get on a roll," Harbaugh said. "I say we do it as soon as possible.”

Baltimore's three losses this season were all different. The secondary collapsed against Miami in Week 2, and a quiet second half offensively did the Ravens in against Buffalo. This time, Baltimore had a few game-changing penalties and turnovers in the last few minutes that undid all of the team's good work.

The interception after the fumbled snap is obviously the type of miscue Jackson needs to avoid, and more generally, the Ravens need to make sure these squandered leads don't become a significant mental hurdle the rest of the way.

Kenyan Drake ran for 119 yards and a touchdown, boosting a backfield in which the top rushing option (besides Jackson) hasn't been all that clear.

“Once you get him started and heading downhill, he's really effective,” Harbaugh said.

Baltimore's wide receivers had a quiet game, with much of the team's passing success coming via tight ends. Receiver Rashod Bateman was out with a foot injury, and Devin Duvernay had only one catch. Robinson had three catches for 27 yards.

Agent Drew Rosenhaus confirmed that veteran receiver DeSean Jackson is set to visit with the Ravens on Tuesday. Jackson played for the Rams and Raiders last season.

Harbaugh said T Morgan Moses (heel) does not have a serious injury. ... RB Gus Edwards (knee) is in the mix to return soon, and Harbaugh said Bateman is close as well.

42 — The number of points the Ravens have been outscored by in the fourth quarter this season.

None of the remaining teams on Baltimore's schedule currently has a winning record, and even at .500, the Ravens are still tied for first in the AFC North. They host Cleveland (2-4) next weekend.