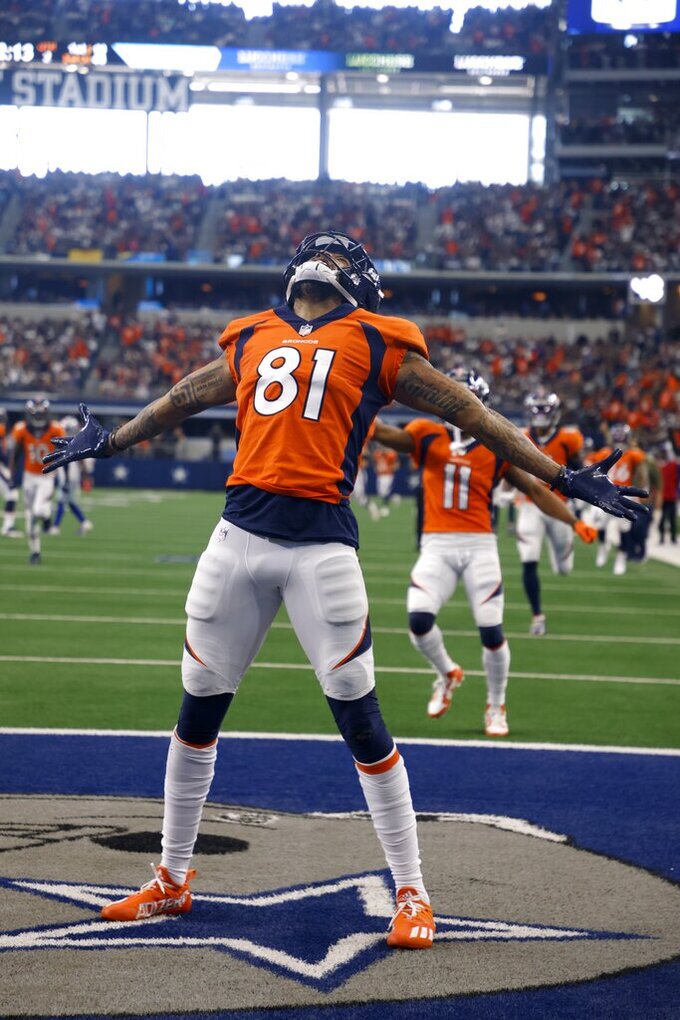 ENGLEWOOD, Colo. (AP) — A person with knowledge of the negotiations tells The Associated Press that wide receiver Tim Patrick and the Denver Broncos have agreed to a three-year extension worth $30 million with $18.5 million in guarantees.

The person spoke on condition of anonymity because the deal won't be signed until Saturday.

Patrick went undrafted out of Utah and was cut by the Ravens, 49ers and Broncos before catching on in Denver in 2018.

Last year, he really began making his mark as the team's most dependable receiver, shining on a roster that includes high draft picks Jerry Jeudy, KJ Hamler and Courtland Sutton at wide receiver and Noah Fant and Albert Okwuegbunam at tight end.

Over the last two seasons, Patrick has caught 88 passes for 1,265 yards and 10 touchdowns in 25 games with no drops and no fumbles.

Despite being so reliable, Patrick’s play still catches people off-guard, and he knows exactly why.

“Undrafted,” Patrick said back in September. “I’m never going to get viewed as that guy just because I wasn’t drafted, so they think my ceiling isn’t high. But I’m a different type of undrafted guy so my ceiling is pretty high.”

“In college, I think almost every defense I played all their DBs got drafted, and I’m all of their bad tapes,” Patrick said, “so I always had the confidence I just needed an opportunity.”

Baltimore coach John Harbaugh swears he could see Patrick’s potential when the Ravens took a chance on the raw receiver who missed more games (17) in college because of injuries than he started (14).

“I really liked him. He was one of my favorite guys in camp that year,” Harbaugh said in advance of the Ravens' game at Denver last month. “We were unable to hold onto him unfortunately.”

“But he’s everything you thought he could be: He’s a big, physical guy, really showed up on special teams first,” Harbaugh said. “That’s where you saw what he was about and that personality as a player has carried over to him as a wide receiver.

While that hasn’t led to fame, it did lead to fortune.

Patrick was playing this season on a one-year, $3,384,000 contract after making a combined $1,665,000 in his first three seasons in Denver and he was set to hit free agency next year but won't have to now that he's getting so richly rewarded to stay in Denver