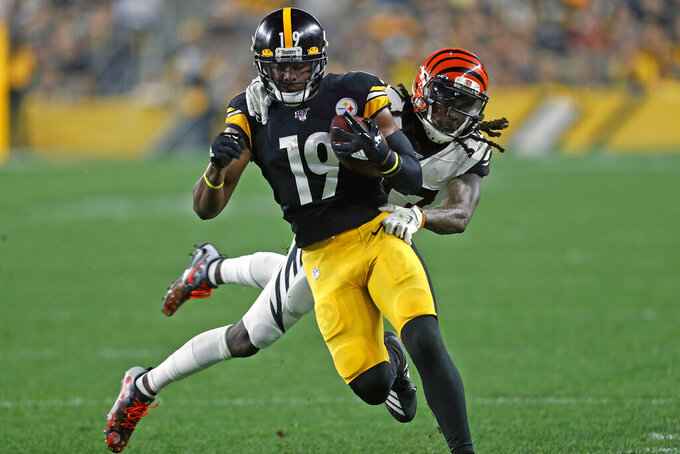 FILE -Pittsburgh Steelers wide receiver JuJu Smith-Schuster (19) is tackled by Cincinnati Bengals cornerback Dre Kirkpatrick (27) during the first half of an NFL football game in Pittsburgh, Monday, Sept. 30, 2019. The Kansas City Chiefs have agreed with former Steelers wide receiver JuJu Smith-Schuster on a $10.75 million deal for next season, a person familiar with the negotiations told The Associated Press on Friday, March 18, 2022. (AP Photo/Tom Puskar, File)

KANSAS CITY, Mo. (AP) — The Kansas City Chiefs have agreed with former Steelers wide receiver JuJu Smith-Schuster on a $10.75 million deal for next season, a person familiar with the negotiations told The Associated Press on Friday.

The person spoke on condition of anonymity because the contract is pending a physical, which should be completed soon.

The Chiefs have been searching for a high-profile wide receiver to take the pressure off Tyreek Hill and tight end Travis Kelce in the passing game. They tried several bargain options last season, including Demarcus Robinson and Byron Pringle, but nobody has been able to fill the role since Sammy Watkins left for Baltimore after the 2020 season.

Pringle signed a $6 million deal with the Bears for next season on Thursday.

The 25-year-old Smith-Schuster, who caught 323 passes for 3,855 yards and 26 touchdowns during his first five seasons in Pittsburgh, should fill the void nicely. And he comes on a relatively low-risk one-year contract after he sustained a shoulder injury in Week 5 last season that ultimately limited him to just 15 catches for 129 yards in five games.

In a coincidence, though, Smith-Schuster managed to return from the injury in time for the wild-card round of the playoffs in Kansas City in January. He caught five passes for 26 yards in a 42-21 loss to the Chiefs.

In another social media post, Smith-Schuster thanked the Steelers and their fans for their support over the years.

“Thank you for taking me in and making me a part of the family from the moment that I was drafted,” he said. "You all took me in so quickly, and I really needed it. I was a wide-eyed 20-year-old who was sent to the East Coast away from my family for the first time in my life, and you made me feel right at home, despite all of the loneliness I should have felt.

“These have been the best five years of my life,” he added. “I owe so much to the fans who embraced me and who made playing on Sundays in Pittsburgh so special. It was an honor to wear the black and gold for you all.”

Smith-Schuster heads from Pittsburgh, where there is uncertainty at quarterback following the retirement of longtime stalwart Ben Roethlisberger, to the Chiefs, where Patrick Mahomes is under contract for most of the next decade. He also joins one of the NFL's most potent offenses with Hill, Kelce and running back Clyde Edwards-Helaire around him.

The Chiefs have now filled their two most pressing needs of free agency, adding a big-play wide receiver along with a safety to replace Tyrann Mathieu. The latter became official on Thursday, when the Chiefs signed ex-Texans safety Justin Reid to a $31.5 million, three-year contract.