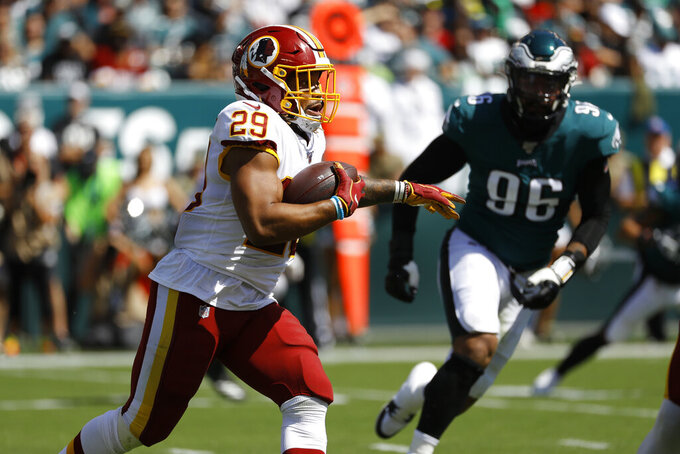 Washington Redskins' Derrius Guice, left, rushes during the first half of an NFL football game against the Philadelphia Eagles, Sunday, Sept. 8, 2019, in Philadelphia. (AP Photo/Michael Perez)

A person with knowledge of the situation says Washington Redskins running back Derrius Guice underwent an MRI on his right knee the morning after making his NFL debut.

The person spoke to The Associated Press on condition of anonymity Monday because the team hadn't announced Guice's injury. Guice is just over a year removed from tearing the ACL in his left knee.

Guice didn't look himself in gaining just 18 yards on 10 carries Sunday in a 32-27 loss at the Philadelphia Eagles. He went to the injury tent on the sideline during the game but downplayed concerns afterward.

Redskins coach Jay Gruden last week informed veteran Adrian Peterson that Guice would be the top running back to start the season. Peterson was a healthy scratch against the Eagles, but could be back atop the depth chart for Washington's home opener against the Dallas Cowboys if Guice is out.