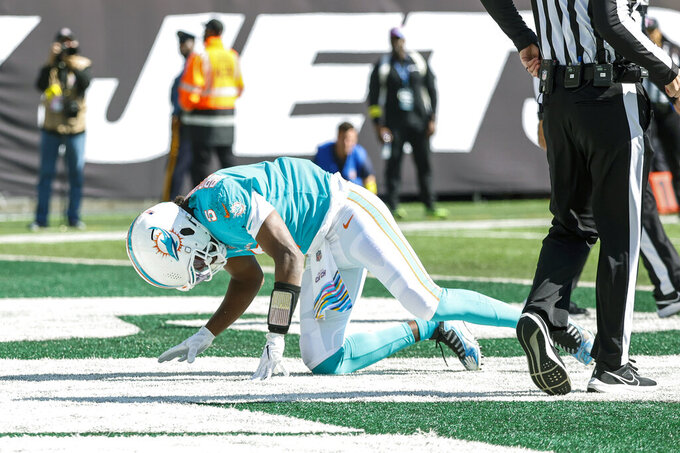 Miami Dolphins quarterback Teddy Bridgewater (5) is knocked down on the Dolphins first offensive play of an NFL game against the New York Jets on Sunday, Oct. 9, 2022, in East Rutherford, N.J. Bridgewater left the game with what the team said was an elbow injury and he was also being evaluated for a concussion. (Andrew Mills/NJ Advance Media via AP)

MIAMI GARDENS, Fla. (AP) — Miami quarterbacks Tua Tagovailoa and Teddy Bridgewater have completed all of the return-to-play steps required by the NFL and are no longer in the league’s recently revised concussion protocols, a person with knowledge of the decisions said Saturday.

The person spoke to The Associated Press on condition of anonymity because the moves were not announced publicly by the Dolphins.

Skylar Thompson will be the starter for Sunday’s game against Minnesota. But Tagovailoa getting cleared puts him on track to return for Miami’s Oct. 22 game against the Pittsburgh Steelers — the game where the Dolphins will pay tribute to the 50th anniversary of their 1972 perfect season.

Tagovailoa returned to practice on a limited basis earlier this week. He had been in the protocols since getting hurt and needing to be taken off the field on a stretcher against the Cincinnati Bengals on Sept. 29.

That was four days after he was allowed to return to a game against the Buffalo Bills after hitting the back of his head on the turf, getting back on his feet, then wobbling. The Dolphins later said the wobble was caused by a back injury.

An unaffiliated neurotrauma consultant tasked with working the Bills game, who has since been terminated from that position following a brief investigation, found no head injury and allowed Tagovailoa to resume playing.

That decision, combined with the scene of Tagovailoa on the ground in Cincinnati days later, sparked quick and significant changes to the concussion protocols by the NFL and the NFL Players Association. The most notable addition was that an abnormality of balance and/or stability would be a symptom prohibiting a player from returning to a game.

Those amended policies kicked in last weekend — and Bridgewater got wrapped up in them almost immediately. He lasted only one play in Sunday’s loss at the New York Jets. While he did not show concussion symptoms, he was placed into the protocols.

The Dolphins said Bridgewater showed no concussion symptoms and passed tests, but a spotter reported seeing him stumble after the play. That determination — video does not seem to show a stumble — made Bridgewater ineligible to return.

Both Tagovailoa and Bridgewater had to complete a five-step return-to-play program as mandated by the league to get cleared. Tagovailoa also saw a number of independent experts in recent days.

“That’s one of the reasons you get multiple opinions and you see the most skilled, highly prepared, schooled and knowledgeable professionals that that you can get your hands on, so that you can have the most information possible from experts and not laymen," Miami coach Mike McDaniel said this week.