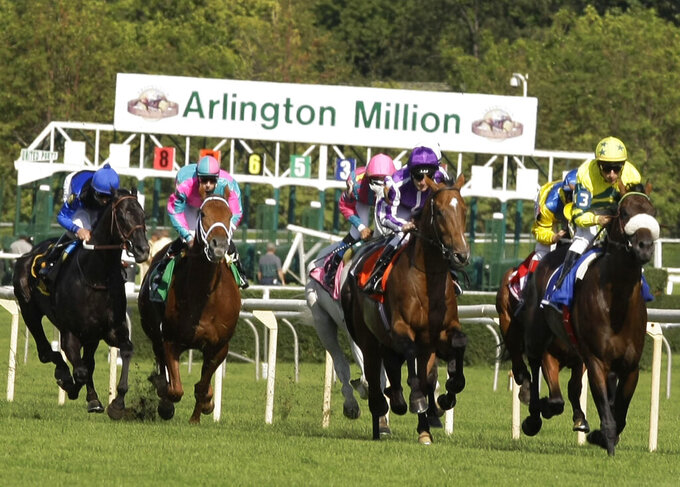 FILE - In this Aug. 9, 2008, file photo, Spirit One, right, from France, ridden by Ioritz Mendizabal, leads the Arlington Million at the Arlington Park race track in Arlington, Ill. Spirit One upset the morning-line favorite Archipenko. The racetrack is expected to close after the completion of racing on Sept. 25, with ownership taking bids for the future of the land. (AP Photo/Charles Rex Arbogast, File)

ARLINGTON HEIGHTS, Ill. (AP) — Unlike a lot of old racetracks past their primes, there are not crumped up tickets strewn all over the grounds of Arlington Park. And the mood around the track is festive.

Guests — never called customers or patrons during its glory days — line up for drinks and pizza and rush to the rail when the horses reach the starting gate. Rare are the reminders that Arlington Park is on the brink of ending a run that lasted more than a century,

Yet, there are a few subtleties, like the announcement over the loudspeaker about closing week that means more than just the end of racing for the season and the collage on the infield video screen with the message, “Thanks Arlington for a Million Memories.”

Barring what horsemen call a miracle, Saturday will be the final day of racing for the venerable track that staged the first horse race with a million-dollar purse 40 years ago and brought legitimacy to international thoroughbreds being shipped over to run in North America. The track outside Chicago has been a staple of the thoroughbred horse racing industry since ownership at Churchill Downs Incorporated put the 326 acres of land up for sale and redevelopment.

“I think it’s an extreme long shot that we’ll be able to save it as a racetrack," longtime trainer Chris Block said. “Up until just recently, a lot of horsemen and fans were in kind of in denial, didn’t think that that it’s actually going to close. But now the reality’s really setting in.”

The reality is the place officially known as Arlington International Racecourse looks like it's the next in a line of famous tracks to close its doors. Hollywood Park and Bay Meadows in California, Calder Park in Florida and Suffolk Downs in Massachusetts are among them.

It hit former Arlington Park communications director Lynne Snierson when she was watching a Los Angeles Chargers game at SoFi Stadium — where Hollywood Park used to stand. One possibility for her old workplace is the next home of the NFL's Chicago Bears, though with a prime location on a Chicago train line, there's no shortage of possibilities for what could come of Arlington Park's land.

“We are currently working through the sale process following interest in the Arlington Park property from many qualified bidders,” Churchill Downs Incorporated spokeswoman Tonya Abeln said. “We have executed confidentiality agreements with each bidder, and in order to uphold our obligations under those agreements and preserve the integrity of the process we are unable to provide comment on the future of Arlington Park at this time.”

While the future is uncertain and present-day racing isn't what it used to be, there's no shortage of stories about Arlington's glorious past.

The track itself opened in 1927 and got a new look in the ’80s after the grandstand burned down, with the result being a palatial estate. Everything from the menu books in the fancy dining room matching the upholstery to the leveled, stadium-style viewing area by the track was geared toward the fan experience.

“It didn’t have the old fashioned charm of Saratoga; it didn’t have that mission-style 1930s old Hollywood of Santa Anita,” said Snierson, who worked there from 1992-95. “It certainly didn’t have the setting standing at the base of the San Gabriel Mountains or Saratoga up in Lake George in the Adirondacks. It’s out there in flat Illinois.

“But within it, within its acreage, it was a beautiful oasis.”

That was the goal of owner Dick Duchossois, known as “Mister D.” He and others who bought the track in the early 1980s “spared no expense," according to Scott Hazelton, whose father was a trainer based at Arlington Park. He and fellow TVG analysts Caton Bredar and Mike Joyce grew up at and around the track and remember how great the racing used to be.

“There’s been so many horses that have gone through there: Secretariat, Dr. Fager, great trainers, great jockeys,” Hazelton said. “It set so many trends for racing, for people’s careers. So much greatness came out of that place and came through that place.”

It's perhaps best known for the Arlington Million, which in 1981 was the first race to offer a $1 million purse. Mike Joyce's late father, Joe, came up with the idea, which put Arlington Park on the map.

But to show how far the place has fallen in recent years, what's likely the final running of the trademark race wasn't even worth $1 million and was renamed the Mister D Stakes. Joyce had mixed feelings about going back for the event this summer, and those doubts were realized walking through the door.

“This was really the first year I went there where it kind of had that feeling of the Grand Budapest Hotel,” he said. “Instead of having the red carpet and the tents set up with the champagne celebration and all that stuff, they had benches stacked on top of each other like they were waiting for the U-Hauls to come in and move them out."

A lot of moving trucks will be needed to get the horses, people and equipment out of Arlington Park if racing there is indeed done for good. Block lamented the jobs that will be lost, which was a big reason for an Illinois gambling bill years ago that wasn't the lifeline for racing it was supposed to be.

Some are still holding out hope.

Longtime trainer Wayne Catalano said: “I still don’t believe it’s going to happen." He has a farm in Elgin about 20 minutes away and has called Arlington Park home for over 30 years.

"It’s the most amazing place in the country, and it’s like, ‘How do you close the most beautiful track?’" said Catalano, who began training at Arlington Park in 1983. “It means everything to me. That’s where my family is now. I raised my daughter there. We had horses there. We had a lot of horses that we raised in my backyard in Elgin and raced there. My whole career was there."

Despite all the accomplishments and memories, there's a chance Arlington Park becomes a part of horse racing's illustrious history with no link to its future — whatever that may look like.

"I’ve seen a lot of racetracks close down," Joyce said. “I worry that if they bulldoze the place and they never have another race in Arlington Heights, it’s just going to become a distant memory for people and just fade.”