Bears center Patrick sidelined by injury to his right hand 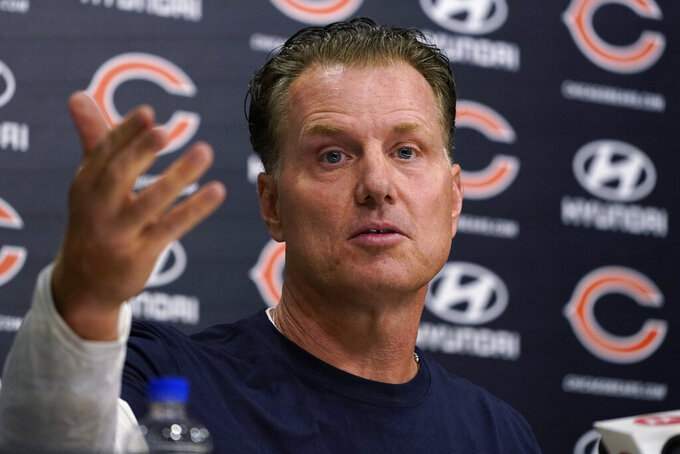 Coach Matt Eberflus confirmed Friday that Patrick injured his right hand and said there is no timetable for his return.

“He injured his right hand and the reason I’m giving that out is he is going to be out for a little bit of time, so it’s not just a soft tissue injury or something where he might be out a couple days,” Eberflus said. “This is more than that.”

Eberflus declined to say if they were injured or sick. He said Jenkins — who had back surgery last August after former general manager Ryan Pace traded up to draft him in the second round — was “working through something with the trainers,” and so was Graham.

Patrick, who turns 29 on Saturday, left Thursday's practice. The Bears signed him in March to a two-year deal to be their starting center.

Patrick made 34 starts and played in 73 games with Green Bay after joining the Packers as an undrafted free agent in 2016. He started 11 games at center, one at left guard and one at right guard last year after spending most of his time at right guard in 2020. New Bears offensive coordinator Luke Getsy was the Packers’ quarterbacks coach the past three seasons.

Rookie Doug Kramer has been taking snaps with Patrick hurt. Sam Mustipher has experience at center, though he's been working out at right guard.

Kramer is from suburban Hinsdale and played for former Bears coach Lovie Smith at Illinois before getting drafted by Chicago in the sixth round.

The Bears added two veterans to their line this week when they signed guard Michael Schofield and tackle Riley Reiff.

Chicago opens the season against San Francisco on Sept. 11. The Bears hired general manager Ryan Poles and Eberflus to replace the fired Pace and Matt Nagy after going 6-11 and missing the playoffs for the ninth time in 11 years.