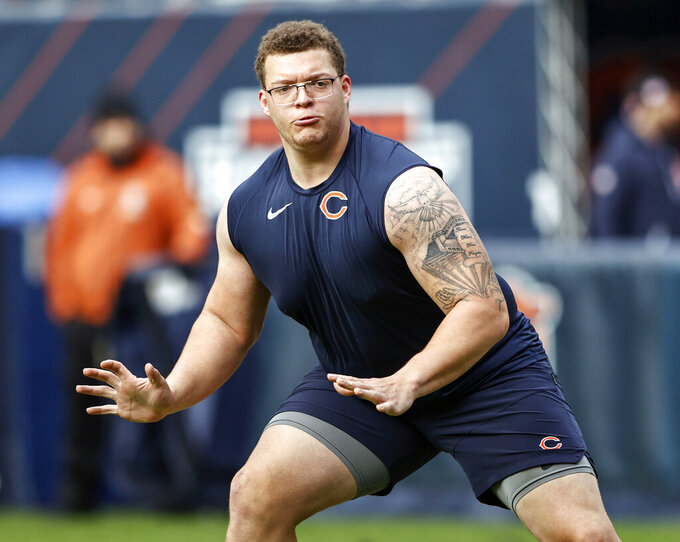 FILE - Injured Chicago Bears offensive tackle Teven Jenkins warms up prior to an NFL football game against the Baltimore Ravens, Nov. 21, 2021, in Chicago. Jenkins has gone from left tackle to right tackle backup to rumors that he is being traded. Now he is playing right guard for the Bears with hopes of securing a starting spot. (AP Photo/Kamil Krzaczynski, File)

Now Jenkins could be on the verge of securing the Bears' starting right guard spot, though he still can’t be certain of the future heading into Saturday’s preseason finale at Cleveland against the Browns.

“I would just say it’s been like a roller coaster and a mix of emotions for me,” Jenkins said. “Going from (No.) 2 or right tackle (No.) 3 ... to go to second right guard and I’m starting right now, it’s a lot about seizing opportunity.

“That’s one thing I’m looking forward to doing this weekend.”

Jenkins went into the offseason thinking he’d be left tackle, got moved to right tackle, then fell behind Sam Borom. Two weeks ago he had a few practice plays with backups at right guard and then replaced veteran Michael Schofield at the position.

It had been a while since Jenkins played either guard spot.

“Oklahoma State it was about my redshirt freshman year, I was a sixth man, so I had some games at guard, at left guard, right guard and that’s really about it,” Jenkins said.

The second-round pick for the Bears last year, Jenkins had to sit out all of training camp and most of last season after back surgery. When he returned at left tackle late in the year, he struggled after not having practice time.

Then it seemed like Bears didn't want Jenkins as part of the new regime when Matt Eberflus took over as coach and Ryan Poles as general manager.

Three weeks ago, rumors swirled about Jenkins being traded after he was demoted to second-team right tackle, but Eberflus has liked what he has seen from Jenkins enough to promote him.

“We all had a hard practice on Wednesday, so he had to push through that as well, and then he got his legs back under him yesterday and it was a little bit better today. He’s feeling more comfortable as he goes.”

It’s been an adjustment for Jenkins.

“Yeah, it’s been cool to work alongside him, you know. In terms of physical gifts, Teven is as gifted as anybody that I have been around.”

Anything can still happen, according to Eberflus, even though this will be the Bears' second straight preseason game with the same starting offensive line.

“I know we’re kind of solidified as of late, the recent one that’s been out there. But we’re still, this thing is still open.”

In fact, he won’t even say he’ll play for the Bears this year, not yet. He's just grateful for the chance to give teams, including his current one, game film to analyze showing his play at guard.

“Ultimately, any film is good film, so no matter if I’m going to be here or no matter or however — I know you (media) know the trade rumors and all that stuff — wherever that may be, I’m trying to get good film and be the best player I can be for myself.

“And hopefully right now it’s for the Chicago Bears.”

NOTES: Eberflus has said the starters will play a half, including linebacker Roquan Smith and quarterback Justin Fields. Smith ended a “hold-in” last Saturday without getting his desired contract extension. ... Running back Khalil Herbert returned to practice after missing a few days following an unspecified injury. ... Former Ravens cornerback Tavon Young remains out and has missed most of training camp. The team revealed he has a lower leg injury and there is no timetable on his return.