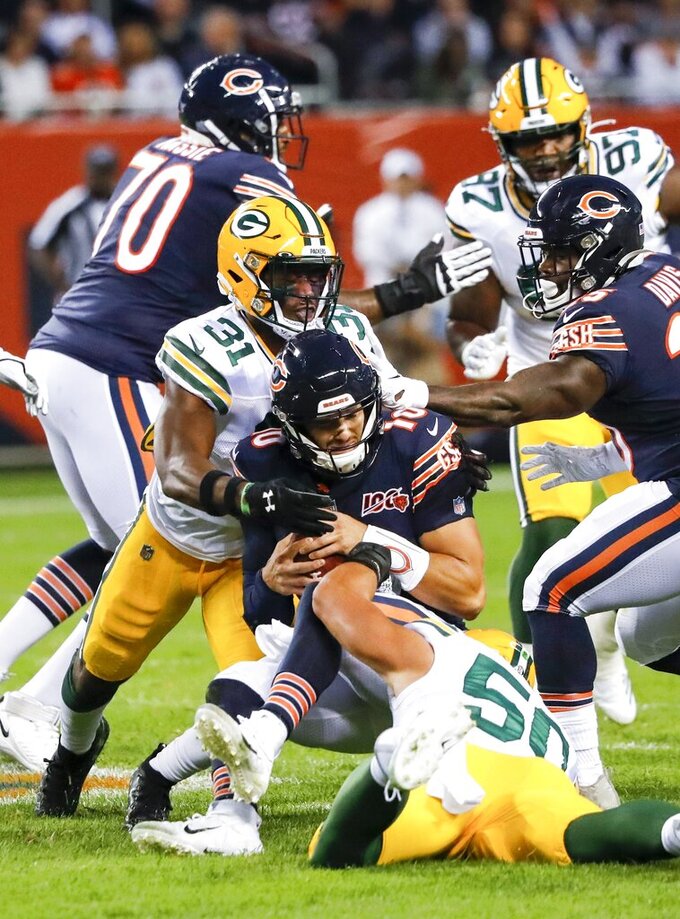 It sure looked as if Mitchell Trubisky and company could have used more preseason work.

Trubisky and the Chicago Bears were shut down by the Green Bay Packers on Thursday night, losing 10-3 in an ugly NFL opener that showered cold water on any championship dreams in the Windy City.

About 90 miles up the I-94 highway, the Cubs outscored the Bears in a 10-5 victory over the Milwaukee Brewers. Kyle Schwarber topped Eddy Pineiro's 38-yard field goal with a grand slam.

But the Bears' offense looked inept all night long, hurting itself with repeated mistakes.

There was no sign of any improvement for Trubisky in his second year under Nagy. He missed several throws and finished 26 for 45 for 228 yards.

Chicago had just 46 yards on the ground after trading leading rusher Jordan Howard to Philadelphia in March. Trubisky was sacked five times, and a handful of penalties torpedoed a couple of drives.

Nagy showed a deft touch while coaching the Bears to a 12-4 record and the NFC North title in his first season in charge. Trubisky passed for 3,223 yards and 24 touchdowns, and Nagy was named NFL Coach of the Year.

Looking to stay healthy, Nagy barely played his biggest stars in the preseason. Trubisky was behind center for three plays in the first exhibition game, handing off each time.

"You could maybe attribute it to that," Trubisky said. "But I think that's kind of a stretch. It's just we were uncharacteristic of who we usually are tonight as an offense."

Nagy brushed off the idea altogether.

While Trubisky struggled, the Bears still had plenty of chances to escape with a victory.

Green Bay was ahead 7-3 when Trubisky opened a third quarter drive with a 22-yard pass to Allen Robinson to the Bears 45. But two delay of game penalties helped kill the opportunity.

The Bears committed three consecutive penalties on their first drive in the fourth, turning a first-and-10 at the Green Bay 43 into a first-and-40 at the Chicago 27.

Chicago drove inside the Green Bay 20 in the final minutes, but former Bears safety Adrian Amos intercepted Trubisky when he threw into double coverage looking for Robinson in the end zone.

"That was a frustrating one," Trubisky said. "I wish I would have had that one back. It felt really good when it left my hand and I thought I put it in a good spot for A-Rob. Didn't keep my eyes on the safety long enough."