Bears QB Fields rushes for 178 yards in loss to Dolphins 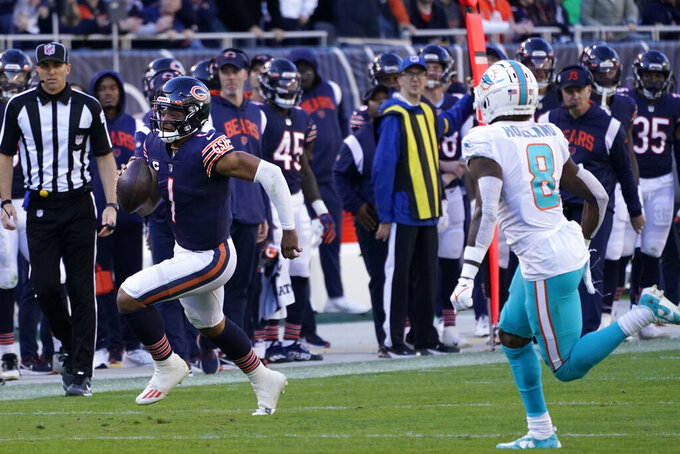 CHICAGO (AP) — There were a lot of questions about Justin Fields as late as a month ago.

Not so many at the moment.

Showing off his dynamic athleticism and improved passing, Fields went toe-to-toe with Tua Tagovailoa on Sunday and nearly led the Chicago Bears to a comeback win. Fields rushed for 178 yards and accounted for four touchdowns, but Tagovailoa passed for three TDs to lead Miami to a wild 35-32 victory.

Fields' rushing total on 15 carries — which included a dazzling 61-yard scamper in the third quarter — set a Super Bowl-era record for a quarterback in a regular-season game, topping Michael Vick's 173 yards for Atlanta against Minnesota in 2002. Colin Kaepernick rushed for 181 yards for San Francisco in the playoffs after the 2012 season.

The 23-year-old Fields also became the first player since at least 1950 with at least 150 yards rushing and three passing touchdowns in a single game.

Miami (6-3) entered with one of the NFL's top rushing defenses, allowing an average of 100.6 yards per game. But it had all sorts of trouble with Fields, who rushed for 125 yards in the second half alone.

“He’s as fast as any skill position runner,” Miami coach Mike McDaniel said. “Like he is really, really fast and he can cut and break tackles. There are a lot of running quarterbacks. This one in particular I think is very elite and adept at that.”

The performance against the Dolphins adds to an impressive stretch for Fields in his second NFL season after he was selected by Chicago with the No. 11 pick in the 2021 draft.

He has completed 76 of 120 passes for 851 yards and eight touchdowns with two interceptions in his last five games. He also has rushed for 455 yards and three TDs over the same period.

Powered by Fields' growth and more designed QB runs called by first-year offensive coordinator Luke Getsy, Chicago (3-6) has scored at least 29 points in each of its last three games.

“I think we are doing a lot of good things in protection to help ourselves moving the pocket and giving sight lines and vision lines for the quarterback that he likes,” coach Matt Eberflus said. “That is really good for him, and he’s doing a great job with that.”

While Fields and Chicago's offense played well again, the defense struggled with Tagovailoa and his two star receivers, Tyreek Hill and Jaylen Waddle. Tagovailoa's 18-yard TD pass to Waddle lifted Miami to a 28-17 lead early in the third quarter.

Fields responded with his jaw-dropping TD run. He made a timely pump fake before dashing up the field and picking up a key block from receiver Darnell Mooney on his way to the end zone.

“I was looking for Moon, stepping up in the pocket looking for Moon and right when I was about to throw it to him he turned around so I kind of had to pull the ball back and at that point, instincts took over,” Fields said.

The Bears had two chances to move in front in the fourth quarter, but they came up empty each time. On their last drive, Fields threw incomplete on a deep ball to newly acquired receiver Chase Claypool that could have drawn a pass interference call on Miami. Equanimeous St. Brown then had a fourth-down pass go right through his hands.

Fields finished 17 for 28 for 123 yards, finding Cole Kmet for two TDs and Mooney for his first touchdown of the season. But Chicago lost the fifth time in six games.

“I feel like this loss, you just have to take the positives out of it, even though you’ve also got to go back to the film room and look at what you can improve on, what plays you can improve on and stuff like that,” Fields said. “Just keep working and keep going.”