Bears visit Vikings, at playoff race pace for once 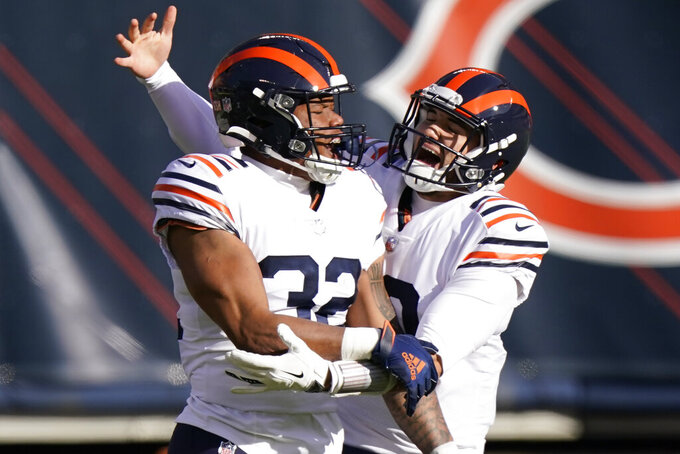 MINNEAPOLIS (AP) — When the Minnesota Vikings finished their debut 2016 season at U.S. Bank Stadium, the game against the Chicago Bears between two eliminated teams was so perfunctory that oil pipeline protesters managed to rappel from the roof to unfurl a banner and become the stars of the show.

In 2017, with the Bears again buried in the standings well before, the finale was staged in the same place. The Vikings already had their first-round bye sewed up.

The division rivals were — déjà vu! — matched up on a copied-and-pasted Week 17 schedule in 2018, too. Chicago's NFC North title and seed for the playoffs was secure. The Vikings could have snagged a spot for themselves with a win, but they fell flat from the start and sucked most of the air out of the increased intrigue by halftime.

Guess who came to Minnesota for the last game of 2019? Sure enough, Chicago showed up for a meaningless matchup with the home team that already had a wild-card berth clinched.

Maybe the game just needed to be moved up a bit.

Though the Bears are again the assigned opponent this year for the Vikings' home finale, they'll square off on Sunday in Week 15. Plus, both teams are 6-7 and in must-win mode for the postseason race. Arizona leads them by one game for the third wild-card spot.

“There’s nothing to overhype about it. We just know what’s at stake,” Vikings running back Dalvin Cook, whose team lost control of the final position with a 26-14 defeat at Tampa Bay last week.

After the Bears stopped a six-game losing streak last week with a 36-7 victory over Houston, coach Matt Nagy made a point to mention the standings in meeting with the players this week.

“Obviously winning the division is no longer realistic," Nagy said, "but we want to do everything we can to be able to get into those extra games and in the playoffs.”

Vikings quarterback Kirk Cousins, who has had plenty of trouble with Chicago's pass rush over the past two seasons, matched a career high by taking six sacks last week. The Bears are only 16th in the league in sacks per pass attempt this season, but they notched seven sacks last week.

“I always look at myself and say, ‘How can I get rid of the ball quicker?’ Cousins said. ”Whether that’s a completion or a throwaway, when you start to feel that pocket condensing, you’ve either got to take off or you want to throw the ball away. Sacks are the last option."

In three games since returning as Chicago's starting quarterback following the injury to Nick Foles, Mitchell Trubisky has completed 67.3% of his passes with seven touchdowns, two interceptions and a 100-even passer rating in that span.

The second overall pick in the 2017 draft has improved enough that he's even thought about the possibility of re-signing with the team that declined his contract option for 2021 and benched him three games into the season.

“But thoughts come and go, and right now I've just got to stay focused on what’s about to happen this weekend and that’s just preparing every day for the Vikings,” Trubisky said.

After stumbling through their share of kicking trouble over the past few years, the Bears have finally found a groove with Cairo Santos — who has made 18 straight field goals and is on pace to break Robbie Gould's single-season franchise record for field goal percentage.

The Vikings are in crisis mode. Dan Bailey has missed three of four extra points and four of six field goals over the past two games, putting his status on the team in question.

“We’ll go with our gut and do what we believe and believe that, whichever decision we make, it's the right one," coach Mike Zimmer said. "It’s all you can do.”

Zimmer was livid on the sideline in Chicago on Nov. 16 when Bailey sent the second-half kickoff straight to three-time All-Pro returner Cordarrelle Patterson, who took it back for a touchdown. The Vikings won that game 19-13, but his former team will be plenty wary of a repeat.

“He’s unbelievable with the ball in his hands,” said Vikings wide receiver Adam Thielen, a close friend and former roommate of Patterson. “Every play has a chance to go the distance.”

The Bears have averaged 30.3 points over their past three games, with their revamped offensive line playing a part. Sam Mustipher was inserted at center, Cody Whitehair moved to left guard and Alex Bars and Germain Ifedi were tabbed as the right guard and right tackle.

Against Detroit and Houston the past two weeks, the Bears posted their second and third-highest yardage totals of the season.