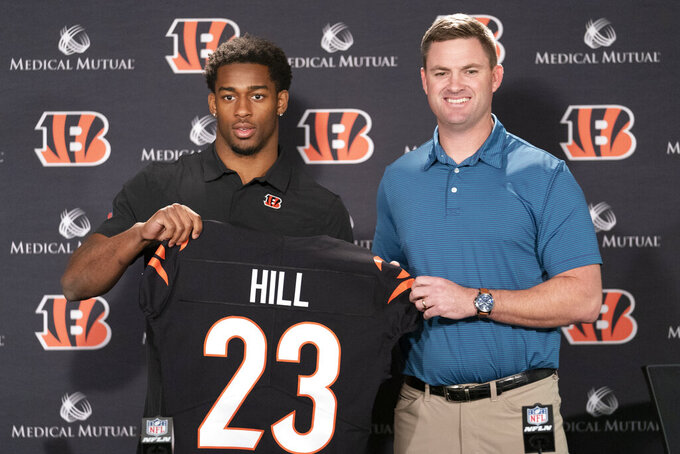 Cincinnati Bengals head coach Zac Taylor, right, holds up a team jersey with Daxton Hill for a photo after introducing Hill as the as the football team's first-round pick in the NFL draft Friday, April 29, 2022, in Cincinnati. (AP Photo/Jeff Dean)

CINCINNATI (AP) — The Cincinnati Bengals focused on defense in the NFL draft, using their first three picks to get players they expect to be immediate contributors.

The Super Bowl runner-up Bengals used five of their six picks in the draft to get defensive players.

They came in seeking depth for the secondary and defensive line. They selected Michigan safety Daxton Hill in the first round with the 31st pick, then traded up three spots to take Nebraska cornerback Cam Taylor-Britt in the second round (60), before getting Florida defensive lineman Zachary Carter in the third (95).

“I think we were going to be in a position where there were some good offensive players there, and they’d be in the conversation,” coach Zac Taylor said. “We are really happy with the three (defensive) guys we’ve walked away with. We walked out of there feeling like, ‘OK, we accomplished not only value with the right players.’ They hit some spots that we knew we needed some depth. We weren’t going to reach for guys, so some guys that we felt good about were there and (we) took them.”

Then they traded up in the fifth round to get another defensive back, Toledo safety Tycen Anderson, who had surprised many with his athleticism at the combine, with the 166th. Cincinnati gave up picks 174 and 226 to the Bears to get the versatile 6-foot-2, 209-pound Ohioan.

The Bengals went back to the defense for their final pick in the seventh round (252), getting edge rusher Jeffrey Gunter from Coastal Carolina.

After cutting the oft-injured Trae Waynes, the Bengals came into the draft seeking another cornerback or two. They had re-signed starter Eli Apple but want other options for a starter next to Chidobe Awuzie.

But when All-Big Ten safety Hill was still available late in the first round, the Bengals, possibly also looking to the future, couldn't pass him up. Taylor said he'll likely fit in at safety and nickel cornerback.

“Whatever the coaches want me to do, that’s what I’m doing," Hill said. "So coming in, finding that role, and being all the way in — being bought in on Day 1, whenever that day is.”

In the second round, the Bengals traded up to get Taylor Britt, who is expected to compete for a starting spot immediately.

“Dax is just a guy that really almost fell to us, and we really felt like he could help us on defense,” Taylor said. "But Cam is certainly just in that pocket of players that we really wanted in the second round, and we weren’t sure he’d be there much longer, so that’s why we came up and got him.”

“We play so many different things where there’s going to be six — sometimes seven — DBs out on the field at one time,” Anarumo said. "No other position on the field, offense or defense, is going to do that. It’s just so critical to have depth there, for sure in today’s NFL.”

They'll give the 6-foot-6, 315-pound Volson, the fourth-round pick, a chance to work his way in the refitted rotation, likely as left guard to compete with Hakeem Adeniji, Jackson Carman and others.

Volson played all 16 games at right tackle on the team’s third straight FCS championship run in 2021 but has the tools to play inside.

“Anybody in that room can compete for any job," offensive line coach/running game coordinator Frank Pollack said. "It doesn’t matter where you are on that depth chart. My MO is you’ve got to earn it every day.”