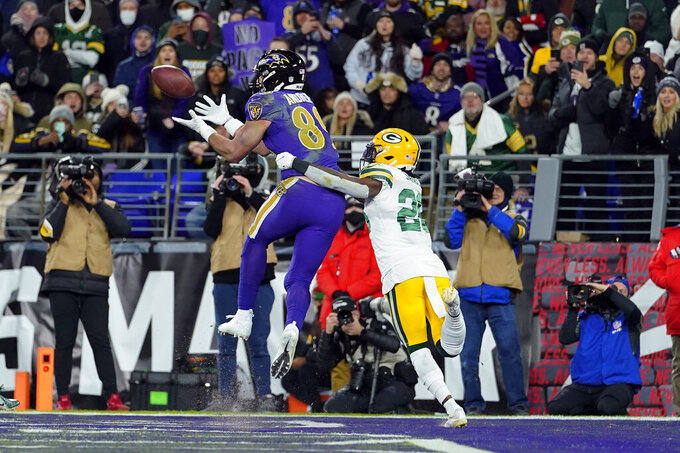 CINCINNATI (AP) — Depleted by injuries and COVID-19 protocols, the Baltimore Ravens have dropped three straight but remain in the thick of the crowded AFC playoff race.

The inconsistent Cincinnati Bengals are tied with the Ravens for the lead in the AFC North, but the potential postseason field is so crowded that a loss will send one of them tumbling back into the pack.

Sunday's game between the rivals, both 8-6, could hardly be more important.

“This game is going to go a long way in terms of determining who wins the division,” Ravens coach John Harbaugh said.

Baltimore will be without star quarterback Lamar Jackson, out for a second straight week because of an ankle injury. Backup Tyler Huntley went on the reserve/COVID-19 list Saturday, leaving Josh Johnson as the team's top available QB.

That's just the top of a long list of Ravens who are hurt or unavailable because of COVID-19 protocols.

Baltimore has lost three in a row by a total of four points, including their failure to make 2-point conversions that could have won games against Pittsburgh and Green Bay.

Last Sunday, the Ravens went for 2 with 42 seconds left, and backup quarterback Tyler Huntley’s pass was incomplete. They lost to the Packers 31-30.

“Across the board — defense, offense, everything — this team has been through a ton," tight end Mark Andrews said.

The Bengals haven't managed to string together more than two consecutive wins all year. They halted a two-game skid by grinding out an ugly — but turnover-free — 15-10 victory over Denver last Sunday.

“We’ve known all along that we were a good football team and had to avoid the critical mistakes,” Cincinnati coach Zac Taylor said. “That’s what has gotten us lately, and we did that (in the Denver win). It wasn’t a sexy game on offense. It was pretty dang sexy on defense and special teams. That was a game we needed to play. Just avoid the critical mistakes, and you’re going to find ways to win.”

Bengals quarterback Joe Burrow said the team is approaching the important game in the usual way.

“I think the best teams and players treat every week the same,” he said. “You can't go through this roller coaster of emotions and preparation the entire season. You've got to stay even-keeled if you want a chance to be successful. It's a long season, and you'll get exhausted if you're not the same way every week.”

The Ravens lost their first meeting with Cincinnati this season 41-17. Burrow threw for 416 yards and three touchdowns for the Bengals, and Ja’Marr Chase had eight catches for 201 yards, including an 82-yard touchdown. Baltimore’s tacking was poor in that game.

With Joe Bachie joining Logan Wilson and Akeem Davis-Gaither on the injury list, the Bengals are thin at linebacker. Clay Johnson is returning from the COVID-19 list for Sunday's game, and Keandre Jones was brought up from the practice squad. Germaine Pratt and Markus Bailey, who also has been slowed by an injury, will start.

“We've got some guys at that position to hold down the fort for us,” Taylor said.

Huntley did a good job filling in, throwing for two touchdowns and running for two in last Sunday’s 31-30 loss to Green Bay. Now he's out as well. The Ravens signed the 35-year-old Jackson before last weekend's game.

Bengals running back Joe Mixon has eclipsed 1,000 yards for the season, but he'll find it tough going against the Ravens' run defense, which is tops in the NFL. He ran 17 times for 58 yards against the Broncos and hasn't had a 100-yard game since Nov. 28. He suffered a minor ankle sprain last week.

“I don’t think there’s a better running back in the league than him,” Harbaugh said. “He runs hard. He’s powerful. He has great lateral quickness (and) body control.”