Bengals DT Ogunjobi out of playoff game with foot injury 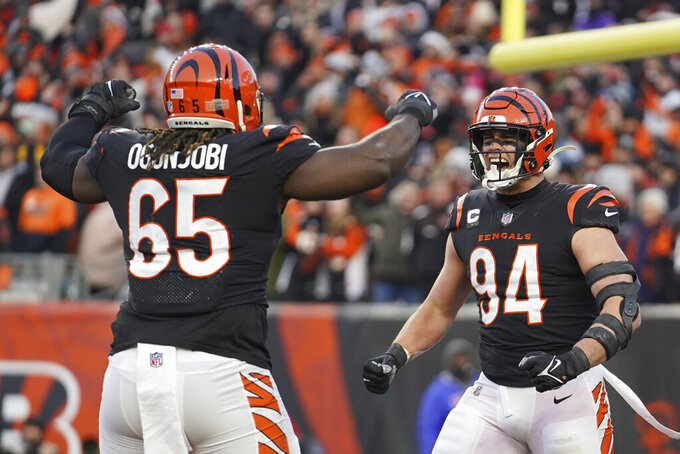 CINCINNATI (AP) — Cincinnati Bengals defensive tackle Larry Ogunjobi was carted off the field with an injury to his right foot in the third quarter of the AFC playoff game against the Las Vegas Raiders.

Later in the quarter, Bengals defensive end Trey Hendrickson was being evaluated for a concussion with his return questionable.

Ogunjobi and Hendrickson were involved in a key play in the first half, with Ogunjobi recovering a fumble after Hendrickson's strip-sack of Derek Carr.

Bengals defensive tackle Mike Daniels injured his groin in the first quarter and did not return.

Raiders linebacker Divine Deablo left in the second quarter with a possible concussion, moments after being beaten by Bengals tight end C.J. Uzomah on a 29-yard pass play.

Raiders defensive tackle Quinton Jefferson hurt his foot, and cornerback Brandon Fayson was ruled out with a concussion in the second half.