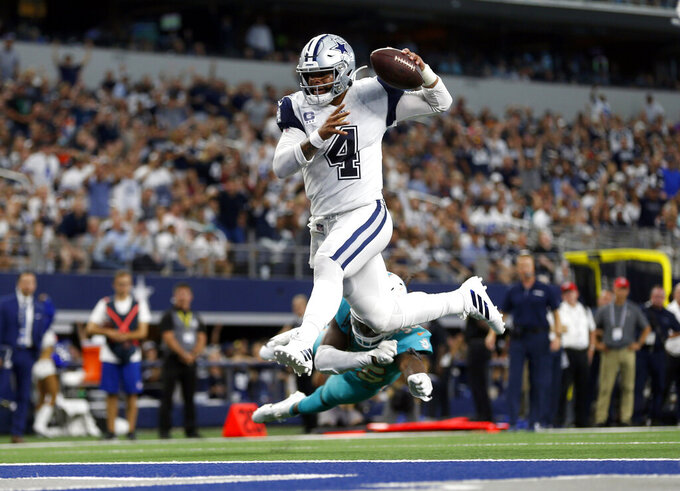 FILE- In this Sunday, Sept. 22, 2019, file photo, Dallas Cowboys quarterback Dak Prescott (4) gets past Miami Dolphins defensive back Walt Aikens (35) and into the end zone for a touchdown in the second half of an NFL football game in Arlington, Texas. With the Cowboys at 3-0, their fans are beginning to see America’s Team as a team of destiny. (AP Photo/Ron Jenkins, File)

With the Dallas Cowboys at 3-0, their fans are beginning to see America's Team as a team of destiny.

Hold on: The combined records of the three opponents they vanquished is 1-8.

Sunday night comes a true test for Dallas when it visits New Orleans. Yes, even without Drew Brees (thumb surgery), the Saints are formidable, as they proved in winning at Seattle last weekend.

So we should find out a whole bunch about the teams from Big D and the Big Easy in a juicy prime-time matchup.

"They're playing awfully well right now," Saints coach Sean Payton says of the Cowboys, stressing the offensive output. "We just went through the numbers. Third down, they're No. 1 in the league, defensively they're second in the league.

"Each category — big play, yards per play, they're running it well, the quarterback's playing well. I think that their design, their talent, all of those things. You can't help but notice the quarterback (Dak Prescott) and the success he's having. That's nothing new for him. He's been successful. But, when you see the combination of running backs (Ezekiel Elliott, rookie Tony Pollard) and I think just the right amount of veteran presence from a (Randall) Cobb and a (Jason) Witten, a few of those guys, (Travis) Frederick the center is back, that's very important."

This could be an important game in the overall NFC playoff scheme, particularly if Teddy Bridgewater remains effective at quarterback until Brees is healthy.

The weekend began Thursday night with Philadelphia's 34-27 victory at Green Bay. Nigel Bradham picked off Aaron Rodgers' pass in the end zone with 20 seconds left, Jordan Howard had his second career three-touchdown game and the Eagles (2-2) ended a two-game losing streak with

Howard finished with 15 carries for 87 yards with two touchdowns rushing and one receiving, Carson Wentz went 16 for 27 for 160 yards, three scores and no turnovers.

Rodgers was 34 for 53 for 422 yards, two touchdowns and a fumble that set up a short Philadelphia scoring drive. Davante Adams had a career-high 180 yards on 10 catches, but he wasn't on the field for the Packers (3-1) on the last drive because of a toe injury.

With the NFC North shaping up as the league's strongest sector, every matchup in the division will be critical, whether in September or December.

Minnesota has not fared well in Chicago, going 3-15 there since 2000. But the Vikings have split the past four trips, and they come in with the NFL's best run game, led by the healthy and revitalized Dalvin Cook . That's all part of the plan: stout defense and time-consuming effective runs.

"It's part of our head coach's identity. That comes with the old-school rules," Cook said after topping 100 yards rushing for the third straight game in Minnesota's 34-14 victory over Oakland. "We know the type of defense we've got."

They also know what kind of D the Bears have: fierce.

The numbers say don't expect this "showdown" for the AFC East lead to be close. New England has won five straight and is 33-5 against the Bills since 2000. Tom Brady's 30 career wins against Buffalo are the most by an NFL quarterback against one opponent. And, get this, Brady's 15 wins at the Bills rank fourth among all quarterbacks, four shy of Drew Bledsoe, who had four wins with the Patriots and 14 with the Bills.

New England also is playing some stellar defense, though it must be considered that its opponents are 0-9 this season.

Then again, Buffalo's opposition has a 1-8 mark.

Here's comes the Mahomes Maserati to the Motor City as the Chiefs seek their third straight 4-0 start. They have scored 25-plus points in an NFL-record 25 consecutive games, and Patrick Mahomes has an NFL-record 13 300-yard passing games in his first 20 starts.

"He is competitive and he is the leader of that bunch," says coach Andy Reid, who will spend his 100th regular-season game on the Kansas City sideline Sunday. "He's the one that's on the field. He wants certain things out of a play. Then as a player, you have to get those things done. That's where my trust in him and the other coaches' trust in him comes in."

Detroit's defense has come alive and could provide a real test for the 2018 NFL MVP.

A huge game for Cleveland, which has not lived up to the hype yet, but can claim a tie atop the AFC North with a key road win. Of course, the Browns are 3-19 vs. Baltimore since 2007. Plus, four of their next five are on the road.

"I think it is something that you really have to be conscious of because you are surrounded by an environment where you hear a lot of things, stuff pops up on your phone and stuff is on the TV," quarterback Baker Mayfield says of the criticism being hurled at his team. "It is just people talking. You just have to make a conscious decision to protect your locker room, take care of your guys and block out the negative stuff. When they are patting you on the back, to me that is even worse."

Mayfield has thrown at least one TD pass in all 16 career starts. Only Hall of Famer Kurt Warner (24) had a better opening run. And DE Myles Garrett has six sacks this season.

The Ravens, 66-23 at home under coach John Harbaugh, including 18-2 in September, played pretty well despite losing at Kansas City. With the other two division foes, Pittsburgh and Cincinnati, both winless, the Ravens could take a strong early lead in the division with a win.

The Raiders basically are road warriors for six weeks, not a comforting thought considering they are 1-8 under Jon Gruden as visitors. They're not keeping things close, having lost back-to-back games in the same season by 18 or more points for the first time since 2012.

Adding to their woes: Indianapolis has won seven in a row at Lucas Oil Stadium.

A very telling set of statistics shows that Oakland allowed eight touchdown drives of 90 or more yards in the past two seasons, including three in the past two weeks. The Colts had two scoring drives of 90-plus yards just last week in a victory over the Falcons.

Way back in 1981, when the Chargers were in San Diego and the Dolphins were a real team, these two played a classic postseason game. Chargers tight end Kellen Winslow probably cemented his Hall of Fame credentials with his performance.

The Chargers have lost eight consecutive games in Miami, with the previous win being that 1981 AFC divisional playoff game in overtime. They are angry coming off two straight defeats despite a well-oiled offense.

Maybe even more encouraging than the play of fill-in QB Kyle Allen was Carolina tying a franchise record with eight sacks last week. DE Mario Addison tied a career high with three sacks and outstanding LB Luke Kuechly had 10 tackles at Arizona. He leads the NFL with 36 tackles.

Allen starts again for Cam Newton (foot) after throwing for 261 yards and four TDs in his second career start. Christian McCaffrey had 153 yards rushing and a touchdown last week, with his 76-yard scoring run vs. the Cardinals the longest rushing touchdown in franchise history.

Yet, in this matchup, it's Houston coming off the more impressive road success. The Texans came back to beat the Chargers, got five sacks of Rivers, and Deshaun Watson was unstoppable: season-best 351 yards passing with three touchdowns and no interceptions. LB Whitney Mercilus had a sack and forced fumble and now has a sack in three straight games and has forced three fumbles and picked off a pass this season.

Two of the more disappointing teams so far. Atlanta can't run the ball; the Titans can't throw it. Tennessee has allowed 17 sacks, most in the NFL, including nine a week ago.

One thing Tennessee is doing right is forcing turnovers (plus-4) while the Falcons are minus-3.

For Atlanta to win this one, it must have a better start. The Falcons have been outscored 47-13 in the first half in three games, including 41-3 in their losses.

Arizona has been an oasis for the Seahawks, who haven't lost there since 2012. Seattle, often considered a home power but not so much in away games, is 29-19-1 in its past 49 road games.

The Cardinals will spend the season hoping top overall draft choice Kyler Murray shows lots of progress, and watching Larry Fitzgerald make his case for the Hall of Fame, which probably already is a slam dunk. The wideout needs five catches to pass Tony Gonzalez for second on the NFL's career receptions list.

The Rams have won five straight over Tampa Bay since 2012, and the Bucs are deeply flawed. But LB Shaquil Barrett leads the NFL with eight sacks in four games. Since sacks became an official stat in 1982, the NFL record through a team's first four games is nine.

LA also must find a way to cover Mike Evans, who's coming off the first three-TD receiving game by a Tampa Bay wideout since 1985.

Of course, the Rams are unbeaten, looking for a second straight 4-0 start under coach Sean McVay; they opened 8-0 last season. With games against Seattle and San Francisco upcoming, the Rams need to stay focused on the Bucs.

The Jags showed some life with their dismantling of the Titans in their previous game, with rookie Gardner Minshew sparking them with his completion rate (73.9 percent) and passer rating (110.6). Both are the highest by a rookie QB in his first three career games in the Super Bowl era. His main target, DJ Chark, is one of five receivers in NFL with at least four 30-yard catches and has a TD catch in each of the first three games.

Not many bright spots in Denver right now. Somehow, a defense that should be top five in the league and has a head coach, Vic Fangio, who has been a successful defensive coordinator for decades, has not managed a sack or a takeaway.

This has the makings of a shootout. The Giants have yielded an NFC-most 94 points, tied with — yep — the Redskins. Both teams got torched in the secondary last week, and although they each can get pressure on passers, there's not a lot of stinginess to go around.

Sixth overall draft choice Daniel Jones makes his second start in place of the benched Eli Manning, and he was sensational down the stretch in beating Tampa Bay. Washington coach Jay Gruden, on an ever-hotter seat, has been holding off starting his first-round pick, Dwayne Haskins, at quarterback.

ESPN likes having the Steelers in prime time because of their national following. Having the winless Steelers, well, that might not attract such a big audience.

So even without Ben Roethlisberger (elbow surgery), it's hard to envision the Steelers flopping in this spotlight.