Big loss by Vikings puts pressure on O'Connell to adjust 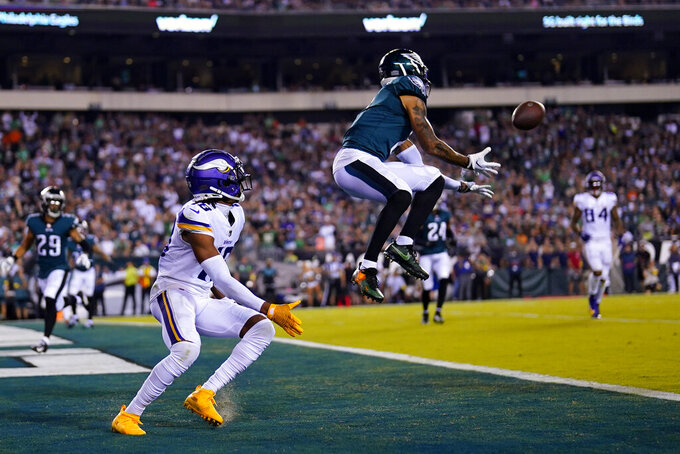 MINNEAPOLIS (AP) — Guiding a team's navigation of the inherent rollercoaster of a regular season is a vital part of the job for an NFL head coach.

Making the right strategical adjustments to maximize the ups and minimize the downs is just as important.

Kevin O'Connell, welcome to the club.

After the Minnesota Vikings had all the answers in a well-rounded win over rival Green Bay to start his first season, they were outplayed and outsmarted in Philadelphia on Monday night in a 24-7 defeat by an Eagles team that has emerged as one of the few early favorites to win the NFC.

Eagles quarterback Jalen Hurts had the hot hand — and the fast feet — that would've been tough for any team to stop, but defensive coordinator Ed Donatell stayed committed to a shell zone coverage that was consistently picked apart during three first-half touchdown drives of 80-plus yards.

The Vikings were awfully sluggish on offense, too, with a pair of three-and-out possessions to start the game and three second-half interceptions thrown by Kirk Cousins the most glaring examples of regression from the 23-7 victory over the Packers the week before.

“We didn’t stay on the field. We didn’t run enough plays,” said Cousins, who completed only one of five passes to star Justin Jefferson when Eagles cornerback Darius Slay was the closest to him in coverage. Two of those throws were picked off.

Cousins didn't get much help.

The Eagles blitzed him often, and extra rushers frequently entered the backfield unabated. Dalvin Cook, Johnny Mundt and Irv Smith Jr. all had egregious drops, including an under-pressure deep throw to Smith late in the second quarter that likely would've been a 63-yard touchdown to pull the Vikings within one score. They punted instead.

The first interception, in the end zone in the third quarter, was Jefferson's fault for not flattening his route in front of Slay.

“We've got to find ways to make it easier on our guys,” O'Connell said, adding: “I have to do a better job and make sure we stay true to what we are and what we want to be offensively.”

Rookie punter Ryan Wright had a gross average of 49.2 yards on five attempts against the Eagles and is tied for the NFL lead with six punts inside the 20-yard line. None of Philadelphia's kickoff or punt returns went anywhere, and Patrick Peterson had the blocked field goal that was returned to the Eagles 30 in the third quarter.

One of the biggest questions about this team is the ability of several young defensive backs to establish themselves as reliable fixtures in the lineup.

The Eagles took a 14-0 lead in the second quarter on a 53-yard touchdown pass by Hurts to Quez Watkins, when second-year safety Camryn Bynum and third-year cornerback Cameron Dantzler Sr. both made their initial break toward tight end Dallas Goedert to allow Watkins to blow by.

“We made some adjustments, just not the proper ones that we felt we could put ourselves in better positions,” Peterson said.

Right tackle Brian O'Neill, who has begun the first season of the contract extension valued at $92 million he signed a year ago, has picked up where he left off in 2021 with a strong start in both run blocking and pass protection.

Cousins didn't send a pass Adam Thielen's way until his 24th attempt, a ball forced into a risky spot with Thielen running a corner route toward the sideline between two Eagles cornerbacks that was picked off by a leaping Avonte Maddox late in the third quarter. Jefferson was open underneath.

Through two games, Thielen has only seven receptions for 88 yards.

“Kirk trusts him inherently, and we have to find ways to continue to get him the ball within the rhythm of the game,” O'Connell said. “We only had 21 plays in the first half, so there were not a lot of targets to go around in general.”

Star safety Harrison Smith (concussion) left in the fourth quarter. O'Connell indicated optimism about his status, though the shortened week of practice and rest makes the clearance process more of a challenge.

Rookie cornerback Andrew Booth Jr. (quadriceps) was inactive for the game, so rookie Akayleb Evans took 21 snaps in place of Dantzler in the second half.

The exhaustive routine that NFL teams follow through the regular season gets a rude interruption from Monday night games, so the pressure will be on O'Connell, Donatell and the rest of the staff this week to reset their strategy in preparation for a home game against Detroit.

As much as the Vikings have historically dominated the series, each of the past three matchups have been decided by exactly two points. The Lions won the most recent one 29-27 on Dec. 5, 2021.

“I can promise you this much: Our guys, even postgame, felt like they wanted to get right back to work,” O'Connell said. “A bad taste in your mouth is one thing, but we know what our standard is.”