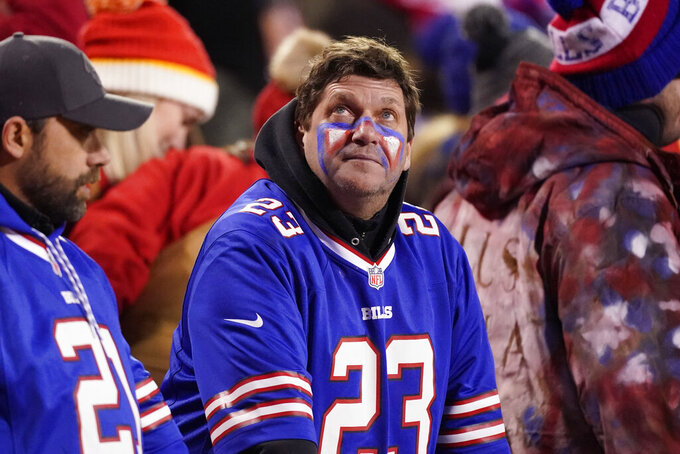 Fans watch from the stands during overtime in an NFL divisional round playoff football game between the Kansas City Chiefs and the Buffalo Bills, Sunday, Jan. 23, 2022, in Kansas City, Mo. The Chiefs won 42-36. (AP Photo/Charlie Riedel)

That’s how much time separated the Bills from securing the next step in their Super Bowl aspirations. Instead came a stunning 42-36 overtime loss at Kansas City in a divisional playoff game on Sunday.

While some on Buffalo's sideline were spotted laughing after Josh Allen completed his fourth touchdown pass to Gabriel Davis — an NFL playoff record — to go ahead 36-33 with 13 seconds remaining, the quarterback sat in stone-faced silence knowing the game was far from over.

“I’m thinking it’s Pat Mahomes on the other side,” Allen said.

Sure enough, Mahomes led the Chiefs to a near-improbable victory in a showdown of two of the league’s top quarterbacks, while sending the Bills packing following yet another one of the infamous collapses.

Wide Right earned its name when Scott Norwood missed a 47-yard field-goal attempt with 4 seconds left in a 20-19 loss to the New York Giants in the 1991 Super Bowl. The Music City Miracle — or “Home-run Throw Forward,” as it’s known in Buffalo — was the result of Frank Wychek’s video-reviewed lateral, setting up Kevin Dyson’s 75-yard kickoff return in the final seconds of Tennessee’s 22-16 win in an AFC wild-card playoff on Jan. 8, 2000.

It didn’t take long following the loss to the Chiefs for the second-guessing to begin.

One question was whether the Bills should have kicked off into the end zone and instead force the Chiefs to return the ball to potentially eat up some of the remaining seconds. A bigger concern focused on how the NFL’s top-ranked defense turned into a sieve in allowing the Chiefs to score twice in the final 1:54 in regulation before losing on the opening drive of overtime.

An emotionally drained coach Sean McDermott declined to get into specifics by saying: “There’s things we talked about, and we can just execute better, and that starts with me and goes all the way around.”

“Man, offense did everything they had to do,” Poyer said. “Defense, we had to go out there and make a stop, weren’t able to do it. It’s just a tough feeling.”

It’s also not the first time Poyer and the defense came up short in a season in which it became abundantly clear the unit padded its production against subpar opponents.

In finishing 12-7, Buffalo went a combined 3-5 against opponents who made the playoffs, with two of those wins against rookie Mac Jones and the New England Patriots.

And the loss to the Chiefs highlighted an inability to win close games, with Buffalo finishing 0-6 in one-score outings, a year after going 6-1.

On the bright side, Allen proved his breakout season a year ago was no fluke as he broke numerous franchise single-season records, while leading Buffalo to its deepest playoff run in 27 years before losing to — who else? — Kansas City in the AFC championship game.

Though the two-time AFC East-winning Bills were far more competitive this time following a 38-24 loss a year ago, the defense once again fell short in its bid to contain Mahomes. In two playoff meetings, Mahomes has combined for 703 yards passing and six touchdowns.

Poyer acknowledged he was repeating himself from a year ago with having the same sentiments as he did a year ago.

“It’s something you’re going to have to feed off in the offseason and continue to learn from,” Poyer said. “This one’s going to hurt for a little while.”

Buffalo is estimated to have $11 million in salary cap space available, according to Spotrac.com, while having opportunities to free up additional room. One option is releasing WR Cole Beasley, who’s production decreased. Another is signing LB Tremaine Edmunds to a long-term deal after picking up his fifth-year option a year ago.

Buffalo’s schedule next season will feature a trip to Kansas City, which will mark the teams’ fifth meeting in two years. The Bills will also play Tennessee for a fifth consecutive season, while their non-conference schedule will be against the NFC North and the NFC West winner, the Rams.

The Bills dropped to 9-1 when scoring a TD on their game-opening drive this season. ... Buffalo has lost nine consecutive playoff games away from Orchard Park, New York, including Super Bowl losses at the Georgia Dome (1994) and Rose Bowl (1993), dating to a 29-10 win at Miami in the AFC championship on Jan. 17, 1993. ... The Chiefs’ 552 yards offense were the most allowed by Buffalo in the postseason, and ranks sixth overall, including regular-season games.