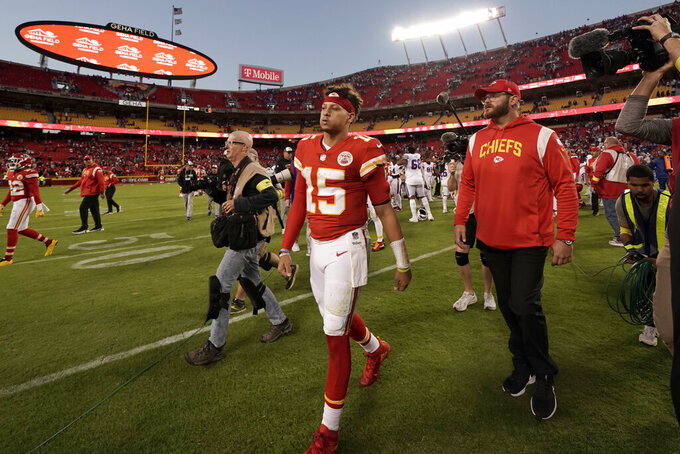 KANSAS CITY, Mo. (AP) — The Buffalo Bills were certain of a rematch with the Kansas City Chiefs because of the way the NFL schedule worked out.

The Chiefs believe they'll get another crack at Buffalo because of their talent.

The latest showdown in a burgeoning rivalry between AFC titans went to the Bills on Sunday, when Josh Allen rallied his team for a 24-20 victory at Arrowhead Stadium. It was the fifth meeting of the teams in less than two years, and came nine months after Kansas City ended Buffalo's season for the second consecutive year in the same building.

“In my opinion, these are the best two teams in football right now,” Chiefs safety Justin Reid said. “When it comes down to the playoffs, we're going to end up seeing each other again. The next time we see them, we are going to have a chip on our shoulder. We're going to need to bring that with us the whole game.”

The guys in the other locker room fully expect to see Kansas City again, too.

“I don't want to give those guys any bulletin board material or any of that,” Bills pass rusher Von Miller said. “It was a hard-fought game today and it came down to the very end, just like we expected.”

The Chiefs (4-2) just made too many mistakes when the game was hanging in the balance.

Patrick Mahomes threw for 338 yards and two touchdowns, but he threw an early interception while forcing a throw into double coverage in the end zone, then another with 51 seconds left that effectively ended the game.

There were also penalties, missed blocking assignments and dropped passes at crucial moments of the game.

“There's some good things we can take out of the game, as tough as it is,” Chiefs coach Andy Reid said. "We made too many mistakes when it was all said and done. They made a few less than we did. It's good to learn from this. It can benefit you down the road if you handle it right. And this team, I think, will definitely do that.

“When two great teams play each other, the smallest of things can get you off course,” Reid added, “and the other team can beat you. We've got to clean up a few things and we'll do that.”

The Chiefs, who could fall into a tie atop the AFC West if the Chargers beat the Broncos on Monday night, don't have much time for corrections. They have a trip to San Francisco next week in their final game before their bye.

The Bills (5-1) are headed into their week off with the best record in the AFC.

“We've got a long way to go, but it's nice to get a win. Any win,” Bills coach Sean McDermott said with a smile. “It's hard to sit two weeks on a loss, so like I said, my family will appreciate this win more ways than one. They don't have to put up with a miserable dad at home this week.”

Make no mistake: McDermott knows the value of homefield advantage in the playoffs.

The Bills were forced to visit Kansas City, which has hosted the past four AFC title games, for a spot in the Super Bowl two seasons ago and came up on the losing end. And they had to travel to Arrowhead Stadium again in January for the divisional round, when the riotous atmosphere no doubt contributed to the Chiefs' overtime victory.

Sure, it's only Week 6. But every game matters, and there was a feeling Sunday mattered a little more than most.

"You want to win and feel like you could win and didn't. How are you going to respond?”