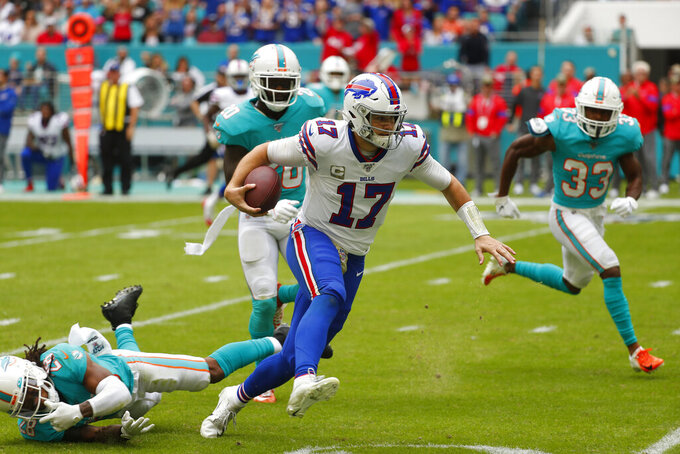 ORCHARD PARK, N.Y. (AP) — Coordinator Brian Daboll refused to draw a correlation between the Buffalo Bills’ offense’s sudden eruption having anything to with his move from the sideline to the coaching booth.

And it had nothing to do with Daboll shaving off his beard and growing a mustache.

Though acknowledging his wife and daughter aren't pleased with his new look, Daboll wasn't prepared to say if he was going to keep it.

"That's a good question," he said. "I sleep next to my wife every night, so you never know when you wake up."

Drawing a big laugh, Daboll allowed for a moment of levity Monday. It was a welcome switch from the recent past, when Daboll spent his weekly news conference being second-guessed over an offense that lacked finish and explosiveness despite Buffalo's winning record.

For once, Daboll could however briefly join in on the fun a day after the Bills (7-3) matched their best start in 20 years with a convincing 37-20 win at Miami.

It was a breakout game for the offense, which produced season highs in points and 424 yards of offense. Second-year starter Josh Allen went 21 of 33 with three touchdowns passing — including a 40-yarder to John Brown — and one rushing.

Even Allen chimed in on Sunday when commenting on Daboll's move upstairs.

"It worked out, so that will probably be what we do from here on out," Allen said. "And I really think it’s due to Daboll's mustache."

The Bills might have been far from perfect, but there was an air of relief and validation following an outing in which Buffalo was finally able to dominate a weaker opponent.

That hasn't always been the case for a team that needed fourth-quarter rallies to beat the New York Jets and winless Cincinnati and sputtered in a 19-16 loss at Cleveland a week earlier.

After spending last week urging his team to play fearless, coach Sean McDermott was rewarded with an outing in which his defense had a season-high seven sacks and allowed a season-low 23 yards rushing.

McDermott dismissed his message as having any influence, and instead credited his players for taking ownership.

“I felt it was a mentality, that’s really what it was, that took shape amongst our players first,” McDermott said. “And for them, I'm extremely proud of them for it.”

Allen’s growing connection with Brown, who had season highs of nine catches for 137 yards — the most yards by a Buffalo player since Sammy Watkins had 154 in a loss to Miami on Dec. 24, 2016. Brown, an offseason free-agent addition, set a team record by topping 50 yards receiving in his 10th straight game.

Special teams have another issue to deal with.

Buffalo allowed Jakeem Grant to score on a 101-yard kickoff return. And then the Heath Farwell-coached unit was caught off guard in allowing Jason Sanders to recover his own onside kick, a play after Kalen Ballage scored to cut Buffalo's lead to 16-7 late in the second quarter.

At least Bills kicker Stephen Hauschka bounced back by hitting all three field goal attempts, including a 51-yarder, after missing two a week earlier.

Second-year middle linebacker Tremaine Edmunds drew praise for taking a leadership role for the message he delivered to the entire team Saturday.

“Very proud of him,” McDermott said. “To see him take ownership and stand up and address his teammates, very mature type of approach, and then he backed it up with his play.”

Edmunds led Buffalo with 12 tackles and had a half-sack.

Running back Devin Singletary won't merit additional touches after fumbling twice, both of which were recovered by Buffalo.

Right tackle Ty Nsekhe is still being evaluated for a right ankle injury. Cornerback Taron Johnson is in the NFL’s concussion protocol.

The Bills face their latest losing opponent in hosting the Denver Broncos (3-7), after which Buffalo enters the most difficult part of its schedule. Buffalo's following four opponents are Dallas (currently 6-4), Baltimore (8-2), Pittsburgh (5-5) and New England (9-1) before closing the season by hosting the New York Jets (3-7). Buffalo's wins have come against opponents with a combined 15-55 record.