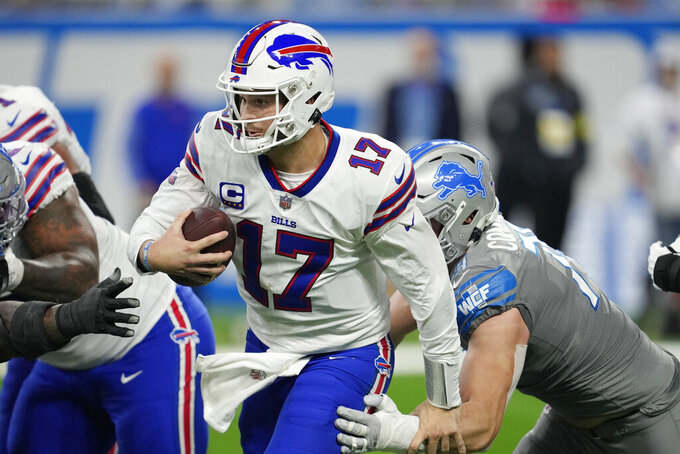 Buffalo Bills quarterback Josh Allen scrambles during the second half of an NFL football game against the Detroit Lions, Thursday, Nov. 24, 2022, in Detroit. (AP Photo/Paul Sancya)

Josh Allen and the Buffalo Bills head to New England looking for their first division win of the season.

Week 13 is loaded with several playoff-type matchups, starting with the Bills (8-3) visiting the Patriots (6-5) on Thursday night. Five other games on Sunday also feature winning teams playing against each other.

The Bills already lost to Miami and the New York Jets and will face all three of their division rivals over the next three weeks as the jumbled AFC East has a chance to send four teams to the playoffs.

Buffalo has won two straight on the road against the Patriots. Extending that streak won’t be easy. The Bills are dealing with illness that has forced several players to miss practice and won’t have edge rusher Von Miller because of a knee injury.

Both teams are coming off games on Thanksgiving. Buffalo earned a last-second win in Detroit while the Patriots lost a tight game in Minnesota. Mac Jones threw for 382 yards and two touchdowns in a 33-26 loss to the Vikings.

The Patriots are 4-point home underdogs, per FanDuel Sportsbook.

Pro Picks expects a close one.

Patrick Mahomes and the Chiefs (9-2) aim to avenge their loss to the Bengals (7-4) in the AFC championship game.

The Giants (7-4) try to snap a two-game losing streak and prevent Taylor Heinicke from buying another pair of Air Jordans.

Cleveland (minus 7) at Houston

Deshaun Watson’s return to the NFL should feature plenty of handoffs to Nick Chubb and Kareem Hunt.

Somehow the Falcons (5-7) are just a half-game behind the Buccaneers in the NFC South.

Russell Wilson has been a disaster in Denver. The Ravens (7-4) can’t hold big leads.

Two losing teams with banged-up QBs takes the sizzle out of this rivalry.

Jacksonville (minus 1 1/2) at Detroit

Trevor Lawrence played his best NFL game in an impressive comeback win for the Jaguars over the Ravens. The Lions are much improved since a 1-6 start.

New York Jets (plus 3) at Minnesota

If Mike White beats the Vikings (9-2) on the road, he should get a statue at a rest stop on the New Jersey turnpike.

Tennessee (plus 5 1/2) at Philadelphia

The Eagles (10-1) had 363 yards rushing vs. Green Bay. They need to figure out how to stop Derrick Henry.

Geno Smith has to get the Seahawks (6-5) back on track after consecutive losses. The Rams (3-8) are one of the worst defending Super Bowl champions in NFL history.

Tua Tagovailoa faces his toughest challenge against the 49ers defense. San Francisco may have to rely on Jimmy Garoppolo a little more because of injuries at running back.

Derek Carr, Josh Jacobs and Davante Adams have led the Raiders to consecutive overtime wins. The Chargers barely escaped a third straight loss when Justin Herbert connected with Gerald Everett on a 2-point conversion in Arizona.

Dak Prescott and the Cowboys (8-3) will be well-rested after a Thanksgiving win while the Colts are coming off a short week.