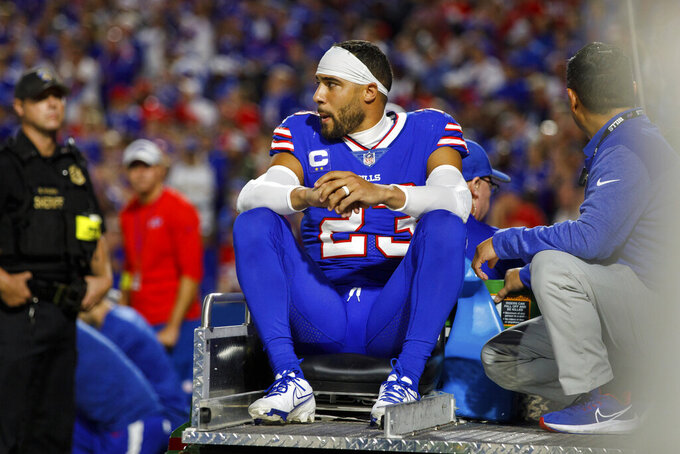 FILE - Buffalo Bills safety Micah Hyde (23) is carted off the field during an NFL football game on Sept. 19, 2022, in Orchard Park, NY. The agent for Hyde announced Saturday, Sept. 24, 2022, that the team plans to place the starter on season-ending injured reserve because of a neck injury. (AP Photo/Matt Durisko, File)

The player's agent, Jack Bechta, first announced the pending move on Twitter earlier in the day, and wrote he expects Hyde to be healthy in returning for next season. Hyde also posted a message on his account, thanking fans for the love and support they've shown him and his family by calling it “truly unreal.”

Hyde already had been ruled out for Sunday's game against Miami. He was carted off the sideline in the second half of Buffalo’s 41-7 win over Tennessee on Monday night.

Coach Sean McDermott said Tuesday that the Bills sent Hyde to the hospital to have his injury further evaluated.

The injury represents a big blow for the Bills, who are off to a 2-0 start.

Hyde and Jordan Poyer have established themselves as one of the NFL’s top safety tandems since both signed with the Bills in 2017. The two were tied with a team-leading five interceptions last season.

Buffalo will be without at least four defensive regulars for their AFC East showdown against the Dolphins.

Rookie cornerbacks Christian Benford and Kaiir Elam are in line to start against a Tua Tagovailoa-led Dolphins offense which leads the NFL through two games with 703 yards passing. Benford and Elam opened the season sharing snaps at the the cornerback spot opposite Jackson.

The Bills had two roster spots to fill with Hyde going on IR and backup offensive lineman Bobby Hart suspended for one game by the NFL after taking a swing at a Titans player, with the punch hitting a Tennessee coach following the game Monday.