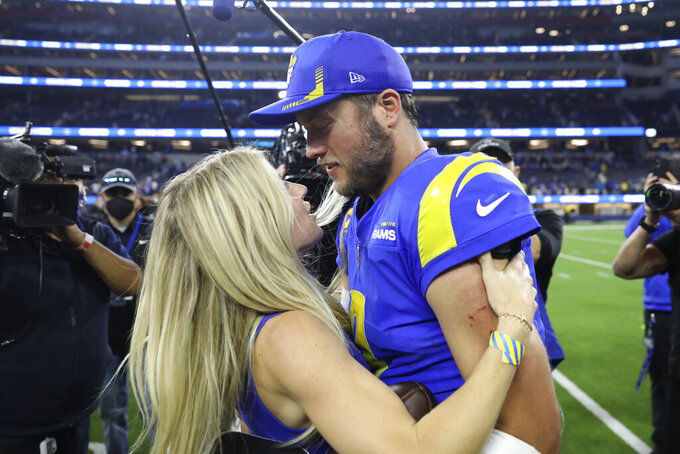 LOS ANGELES (AP) — No team in the NFL was built like the Los Angeles Rams because nobody else would dare.

No organization shares the Rams' unorthodox values or their depth of faith in themselves. Nobody else manages its high draft picks like Los Angeles does, and no team has navigated the minefield of mid-career veteran acquisition with the Rams' success.

The Rams know who they are, and they’re not changing until the wheels fall off.

“Maybe that’s not for everybody, and maybe that’s not sustainable,” Rams chief operating officer Kevin Demoff said. “Maybe it doesn’t work long-term, even though we seem to figure it out every year. But it’s working right now.”

A team that hasn't made a first-round draft pick since 2016 and probably won't make another until at least 2024 is in the Super Bowl for the second time in four years during a half-decade with five winning seasons and three NFC West titles under McVay. Los Angeles is set up to contend again next season, even if every big-name addition walks away to cash in the rehabilitated value created by stopping off in Hollywood.

Jalen Ramsey, Matthew Stafford, Odell Beckham Jr., Von Miller, Leonard Floyd and Andrew Whitworth will play extensively for the Rams against Cincinnati in Super Bowl 56. They all started their careers elsewhere before joining the Rams, who gladly paid high prices to get them.

Many other expensive veterans already have come and gone. The Rams continue to write the checks and to trade away the draft picks necessary to keep a star-studded team on the field for McVay, who invariably gets these big names to buy in.

Everything works because the Rams have a base on which they can build — and no foundation is stronger than Aaron Donald, one of three St. Louis Rams left on the roster six seasons after their LA homecoming.

“They’ve got a special way of doing things here,” said Miller, their latest prize midseason acquisition. “You see it all throughout the organization. Everything about this place is special.”

They're known for their flashy moves, but the Rams also draft effectively and develop relentlessly. In fact, Los Angeles had more players on its roster this season who were drafted by the team than any other club, while their 33 homegrown players — draft picks and undrafted free agents — were the most on any championship game roster.

“People don't think that about us,” Demoff said. “They don't remember that we've had the second-most draft picks of any franchise since 2017. They just look at the shiny objects, as Les calls them, the No. 1 picks, and say, ‘Well, that’s how you build a team.’”

Stafford's arrival has been well chronicled, but he's distributing the ball to a mix of draft picks and clever pickups at the skill positions. NFL receiving leader Cooper Kupp and Van Jefferson were draft picks, as were tight end Tyler Higbee and running backs Cam Akers and Darrell Henderson. But Beckham salvaged the Rams' receiving corps since arriving in the same week Robert Woods was lost for the season, and trade acquisition Sony Michel carried the Rams' running game while Akers and Henderson were hurt.

The defense is another mix of homegrown talent and big-time additions. It's shakier than the NFL's No. 1-ranked group last year because the Rams lost four starters to free agency and couldn't afford to replace them with big names, instead promoting from within.

Donald is flanked by free-agent signee A'Shawn Robinson and Greg Gaines, whose emergence after Sebastian Joseph-Day's injury was quietly one of the Rams' most important stories of the season. Floyd and Miller are the edges on Los Angeles' vaunted pass rush, while recently returned rookie Ernest Jones and homegrown linebackers Troy Reeder and Travin Howard try to keep up in the middle.

The secondary lost two key starters last winter. Ramsey is a do-everything All-Pro, but his support isn't impressive: Darious Williams is having a down season at the other cornerback spot, while draft pick Nick Scott and 37-year-old Eric Weddle have filled in for injured starting safeties Jordan Fuller and Taylor Rapp.

On special teams, the Rams smartly signed kicker Matt Gay last season and watched him become a Pro Bowl selection. Punter Johnny Hekker is the third St. Louis veteran left in a horned helmet, and he has been excellent in the playoffs after a down regular season.

The Rams are bold because that’s what Snead wants, but also because they believe it’s what Los Angeles wants. This franchise is determined to join the Dodgers and the Lakers as LA's signature teams, but everyone realizes that will happen only with big wins and big moves.

So far, the Rams' audacious plans are working superbly.