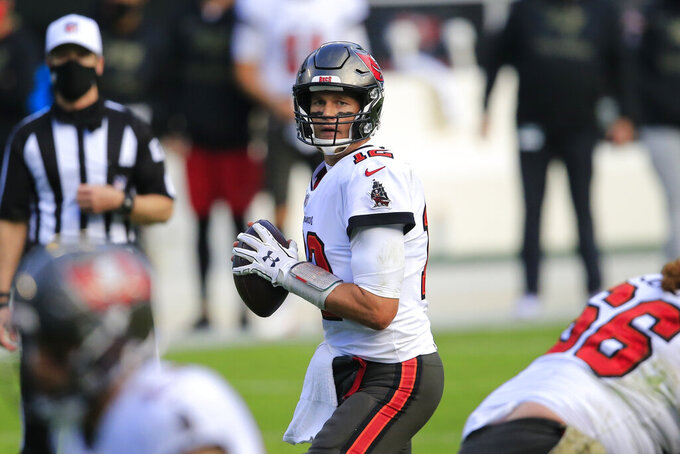 TAMPA, Fla. (AP) — By Tom Brady’s own admission, the Tampa Bay Buccaneers are still trying to establish an offensive identity.

The six-time Super Bowl winner is surrounded by an impressive collection of playmakers that have helped him lead the team to its best start in a decade. However, the Bucs (7-3) have not performed with the consistency Brady feels is necessary to realize the team’s vast potential.

“I think we’re trying to figure it out. It’s going to change from week to week based on who we play. That’s what teams are all about,” Brady said.

“Football is a tough sport,” the 43-year-old quarterback added. “There’s different matchups every week, there’s different elements to every game that are a challenge. It’s never really the same.”

That was before Sunday’s 46-23 rout of the Carolina Panthers, which saw the Bucs rush for 210 yards, gain 544 overall and score on nine consecutive possessions after an early fumble positioned the Panthers for a quick 7-0 lead.

It was exactly the kind of response Brady and coach Bruce Arians were looking for coming off a 38-3 loss to the New Orleans Saints the previous week.

Ronald Jones scored on a 98-yard run and finished with 192 yards rushing as Tampa Bay revived a ground attack that had been nonexistent the previous two weeks, including a league-record-low five carries for 8 yards against the Saints.

Arians said the dominant performance was a significant step in the right direction, evidence it is possible for the Bucs to have numerous players involved in the offense without force feeding anyone.

“It’s all about their egos,” the coach said Monday. “If you check your ego at the door and it’s all about winning, it’s not hard at all.”

The Bucs improved to 3-0 in games following a loss this season. They’ve scored 31, 38 and 46 points in those victories.

“It’s a team sport, so the team has got to come together and understand the things we need to improve,” Brady said, explaining his knack for rebounding from losses with strong performances.

The Bucs are 7-3 for the first time since 2010, when they finished 10-6 but didn’t make the playoffs. They’ve already matched their win total for all of last season, while they failed to earn a postseason berth for the 12th consecutive year. That’s the second-longest playoff drought in the league.

The Bucs have played three games with prime-time starts and started slowly in each, losing to Chicago and New Orleans and barely holding off the New York Giants for a 25-23 victory three weeks ago.

With the Los Angeles Rams heading to town next Monday night, Arians is adjusting practice times this week in hopes it helps the team perform better. Instead of working in the afternoon, they’ll practice at night Friday and Saturday.

“We’ve got to try something,” Arians said.

Linebacker Jason Pierre-Paul had a sack against the Panthers, giving him a team-leading 7½ this season. He also had his third career interception one week after failing to snare a possible pick against the Saints.

For the third straight game, the defense started slowly. The unit redeemed itself by limiting the Panthers to 35 yards and six points after halftime. Pierre-Paul stressed the importance of being more consistent moving forward.

Left guard Ali Marpet has missed the past two games due to a concussion. With veteran Joe Haeg standing in, the Bucs yielded three sacks and Brady was hit nine times against the Saints. Arians juggled the lineup against Carolina, with center Ryan Jensen shifting to left guard and A.Q. Shipley starting at center. The move worked. Brady was hit seven times Sunday, however, he was sacked once.

192 — Jones' career-best rushing total was the third-highest total in the NFL this season. Only Derrick Henry, who has topped 200 yards twice for the Tennessee Titans, has run for more.