Broncos counting on Jeudy's return to snap them out of funk 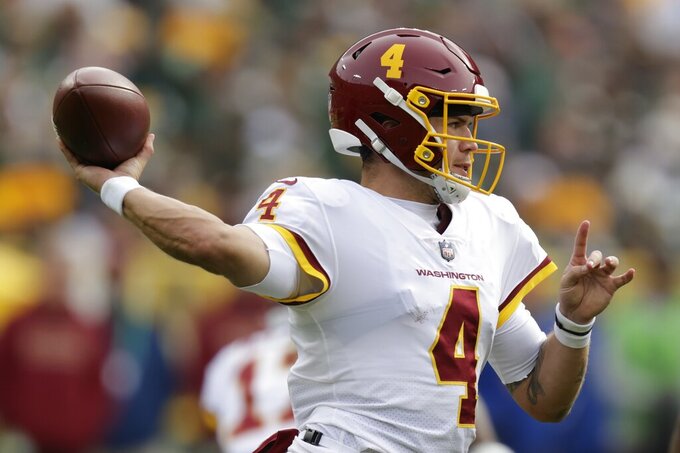 TURNOVER DIFFERENTIAL: Washington minus-3; Broncos minus-3.

WASHINGTON PLAYER TO WATCH: As usual it’s QB Taylor Heinicke, who will be making his ninth NFL start and has the capability of winning or losing a game himself. Heinicke again has to toe the line between trying to do too much and capitalizing on the risky style that makes him a threat to run and throw.

BRONCOS PLAYER TO WATCH: QB Teddy Bridgewater is walking a lot better than he was a week ago when he gingerly stepped onto the field at Cleveland with foot and thigh injuries and had an awful first half before getting going after halftime. He said this week, “It's not time to panic — but it almost is.” And he's intent on leading the Broncos out of their doldrums.

KEY MATCHUP: Broncos WR Jerry Jeudy vs. Washington's defense, which ranks dead last in the league against the pass, allowing 300.6 yards per game. Jeudy had six catches for 72 yards in the opener at the Giants before suffering a high right ankle sprain that sidelined him for a month and a half. He was moving great at practice and even dancing during some of the drills.

KEY INJURIES: : Washington 2020 All-Pro RG Brandon Scherff is a candidate to return after missing three games with a knee injury. TE Logan Thomas (hamstring), WR Curtis Samuel (groin) and rookie RT Sam Cosmi are expected to be out again. RB Antonio Gibson continues to play through a shin injury that includes a stress fracture. ... If Von Miller (ankle) is out, the Broncos will be without all four of their starting linebackers. Fellow pass rusher Bradley Chubb is still recovering from ankle surgery and both inside 'backers — Alexander Johnson and Josey Jewell — are out for the year with torn chest muscles. The Broncos traded for OLB Stephen Weatherly and ILB Kenny Young to help them stay afloat.

SERIES NOTES: These teams have always been evenly matched, with neither one winning more than two in a row. The biggest game in series history was Super Bowl 22 in San Diego when Washington routed Denver 42-10 on Jan. 31, 1987. The teams last played in Denver in 2013 with the Broncos routing Washington 45-21. This will be the first time Denver’s Vic Fangio and Washington’s Ron Rivera have faced off as head coaches.

STATS AND STUFF: Heinicke threw for 268 yards, a touchdown and an interception, rushed for a career-high 95 yards and lost a fumble last week at Green Bay. ... Gibson and fellow Washington RB J.D. McKissic split duties again last week. Gibson rushed for 51 yards, and McKissic had four catches and 56 yards from scrimmage. ... WR Terry McLaurin had a team-high seven catches and 122 yards against the Packers. He is looking for his 10th career 100-yard receiving game. ... TE Ricky Seals-Jones had a career-best six catches for 51 yards at Green Bay. ... DT Jonathan Allen leads Washington with five sacks after two more in Week 7. ... S Landon Collins led the team with seven tackles at Green Bay. ... K Chris Blewitt made one of his two field goal attempts last week in his NFL debut. ... The Broncos are honoring QB Peyton Manning during halftime ceremonies for his Pro Football Hall of Fame induction last summer. ... The Broncos have surrendered touchdowns on their first defensive series in each of the last three weeks. ... Denver has trailed by double digits at halftime in all four losses this month. ... Bridgewater led the Broncos on two long TD drives in the second half last week at Cleveland, but Denver's defense couldn't get the ball back in the final 5½ minutes to give him a chance to win it. ... Broncos RBs Melvin Gordon III and rookie Javonte Williams continue to impress even though OC Pat Shurmur has limited their touches of late. Gordon had his first TD catch last week and Williams had a season-high six receptions, including one for a TD. The pair ran just 12 times total at Cleveland. ... S Kareem Jackson led the Broncos with nine tackles in Week 7. He had 10 tackles, a sack and a pass breakup in his last game against Washington, on Nov. 18, 2018, while still with the Texans. ... DE Shelby Harris had his second sack of the season last week and also blocked a field goal attempt. ... If the Broncos don't win Sunday, they'll have their second winless October (1967) in franchise history.

FANTASY TIP: Even if he's rusty, Jeudy is primed for a big game in his comeback.