Broncos hope Jeudy's return vs. Washington is their elixir 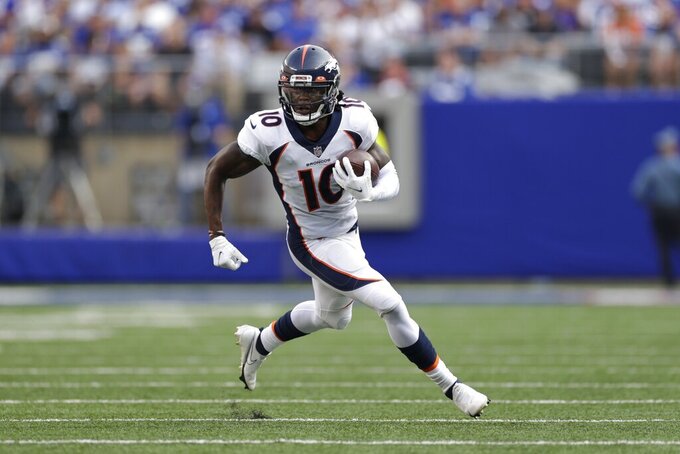 FILE - In this Sept. 12, 2021, file photo, Denver Broncos' Jerry Jeudy (10) runs upfield during the first half of an NFL football game against the New York Giants in East Rutherford, N.J. Jeudy will return to action Sunday, Oct. 31, for the first time since suffering a high right ankle sprain in the opener against the Giants. (AP Photo/Adam Hunger, File)

DENVER (AP) — The Denver Broncos need to beat the Washington Football Team on Sunday to avoid the franchise's first winless October since 1967. With his team stuck in a four-game tailspin, quarterback Teddy Bridgewater suggested, “It's not time to panic—but it almost is.”

“It's time to sound an alarm,” Miller insisted. “The time is now to win. The sense of urgency has to be at an all-time high."

Maybe Jerry Jeudy will jolt the Broncos (3-4) back into the win column.

He returns to the lineup against Washington (2-5) on Sunday after recovering from a high right ankle sprain he suffered on opening weekend at the Meadowlands.

“It’ll open some things up for everyone in this offense having a guy like Jerry back,” Bridgewater said. “We’re excited that he’s going to be out there.”

“They’re adding a playmaker: talented, talented player, a talented receiver," Washington defensive coordinator Jack Del Rio said. “He’s got the quickness, ball skills. They like utilizing him in certain packages and in certain ways, and we need to be prepared for that.”

Washington is also punching that panic button after three straight losses that has the team teetering on triviality just like the Broncos are.

Going into its bye week with Tom Brady and the defending Super Bowl champion Buccaneers up next on the other side, it’s hard not to see this game as the biggest of the season for Washington. A loss would drop the team essentially out of even a long-shot chance at contention.

“I know the expectations were high coming into this year,” Washington coach Ron Rivera said. “The truth of the matter is we haven’t lived up to those. The thing that we have to do more than anything else is continue to work hard, continue to prepare and take it one game at a time focusing on that one game and, quite honestly, win.”

Washington QB Taylor Heinicke was taking college classes online a year ago and had just one NFL start to his name before the playoffs last season. So it stands to reason he’s still trying to find his way.

His swashbuckling style and willingness to sacrifice his body to get into the end zone or pick up a first down is part of what has him starting, but he’s also honing the passing part of his game.

“I think it’s just trying to be perfect,” said Heinicke, who threw for 268 yards and ran for a career-best 95 yards last week in Green Bay. "Try to be on top of every single read and make the perfect throw, and I’m trying to stay in the pocket and get those guys. It’s just more of go out and play your ball.”

Broncos safety Justin Simmons said it takes tip-top rush and coverage to curtail such an “extremely athletic" quarterback as Heinicke. “Guys like that are special and able to create plays.”

“I've known Peyton since he was 13 or 14 years old,” Broncos coach Vic Fangio reminisced. “He used to come over to the Saints facility when I was a coach there and in the offseason—there was no such thing as OTAs back then—but if you had enough guys, you'd go out and throw it around and there were days we had no quarterbacks or one quarterback and we'd have Peyton in there throwing to our pro players.”

“Start at halftime,” Broncos offensive coordinator Pat Shurmur cracked when asked how to solve his team's propensity for slow starts; Denver has just one first-half touchdown in its last three games.

Denver's defense is also starting off poorly, allowing first-drive touchdowns in all three of those losses. The Broncos haven't even had the ball with a lead since September.

The banged-up Browns won the coin toss last week and wanted the ball out of the gate, then scored in just five plays.

“"You’ve got to take that personal and be upset about it," Simmons said. "I love our guys in our room, man. I do a lot, and we’ve got to find a way to answer that.”

With a rash of injuries at linebacker, the Broncos acquired OLB Stephen Weatherly from the Vikings and ILB Kenny Young from the Rams. Both are expected to play Sunday.

“You don’t get an asterisk next to a loss because guys are hurt,” Simmons said. “I’m glad we have some guys that are going to be able to plug in and help us to play fast.”