Broncos move on after amicable divorce with Von Miller 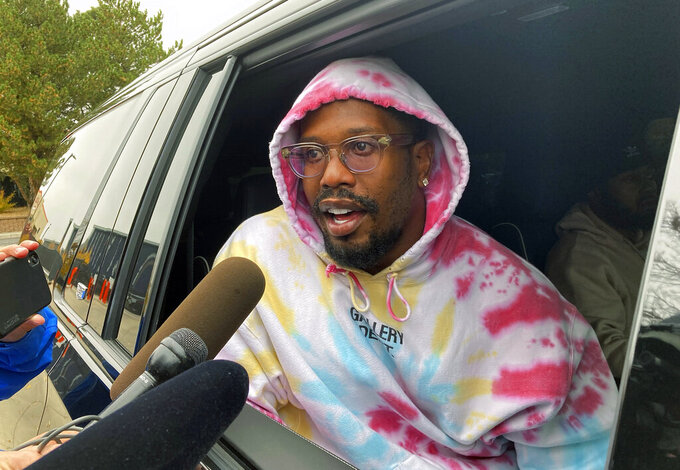 Denver Broncos linebacker Von Miller stops to talk to reporters outside the Denver Broncos headquarters after he was traded to the Los Angeles Rams for two draft picks before the NFL football trade deadline, Monday, Nov. 1, 2021, in Englewood, Colo. (AP Photo/Pat Graham)

ENGLEWOOD, Colo. (AP) — How do the Denver Broncos make sure Von Miller's exit doesn't extinguish their playoff prospects? It starts with everybody insisting they'll be fine following the amicable divorce from the best defender in franchise history.

“Nobody's surrendering here,” coach Vic Fangio vowed before the team's first practice since the deal that sent Miller to the Rams for a pair of 2022 draft picks.

Less than 24 hours earlier, GM George Paton declared, “This is not a fire sale” and insisted the Broncos are still a postseason contender even though their 4-4 record “feels like 1-7."

They'll have to play much better, especially offensively, to end their long playoff drought — their last postseason game was on Feb. 7, 2016, when Miller's MVP performance secured the franchise's third Super Bowl victory.

A daunting schedule remains for the Broncos beginning Sunday at Dallas (6-1). Only two remaining opponents have losing records and all three division road games remain along with a home game against the Chiefs, whom they haven’t beaten since 2015.

While Cowboys coach Mike McCarthy certainly would’ve liked to see Miller heading back to his hometown of Dallas instead of Los Angeles in the NFL’s biggest trade of 2021, he’s relieved he won’t be seeing the Broncos' career sacks leader Sunday at AT&T Stadium.

“I’m glad he’s lining up with the Rams this week, that’s for sure,” said McCarthy, who declined to reveal if the Cowboys were one of the two other teams who tried to acquire the star linebacker.

Miller had a series of meetings Monday with his coaches and general manager before flying to L.A. to begin the second chapter of his career.

“It was a little bit emotional for both of us,” Fangio said of his meeting with Miller. "Gave a big old hug, a long hug, hard squeeze. Just told him I was gonna miss him. I enjoyed being around him. And I'll stay in touch with him.”

Now, the Broncos have to navigate the emotional mountain of losing their locker room leader and face of the franchise for the past decade.

“I got good confidence in those guys,” Fangio said. “They all did a good job the other night” with five sacks against Washington while Miller sat out with a sprained ankle.

Like everyone else at Broncos headquarters, Bridgewater was sad to see Miller go.

“That's the business side of it,” Bridgewater said. “But Von is going to be a Bronco forever. His legacy lives forever.”

Especially in the locker room.

“He's helped me so much in my own personal growth. Not even just in football, but just in life," safety Justin Simmons said. "Having conversations with him, going over to his house all the time, he's like a brother.

“And it was tough. It was like a surreal bittersweet moment. You break a four-game losing streak, a big win at home. You're celebrating that. And then the next morning you wake up and you hear the news," Simmons added.

"I'm still excited for him and what he can do. It's just not going to be with us.”

Fangio arrived in Denver following the 2018 season when Chubb and Miller combined for 26½ sacks.

Yet, the pass rushing pair only played that first month together before Chubb missed the remainder of 2019 with a torn ACL. Miller missed all of last year with a freak ankle injury, and Chubb only played in one game this season before undergoing surgery to remove bone spurs from his left ankle.

Asked if he's ever wondered how a healthy pair of premier pass rushers could have changed Denver's defense — and maybe the Broncos' fortunes — had Chubb and Miller played more than 4 1/2 games together out of a possible 40, Fangio retorted, “Where'd the half come from?"

“Ten snaps,” Fangio sighed. “Yeah, so that answers your question.”

“Occasionally you do” lament the rotten luck, Fangio followed up. “But that's the way this league goes. It's a fantasy football mentality, Nintendo football mentality: It doesn't matter. They want results. And we've got to get the results.”